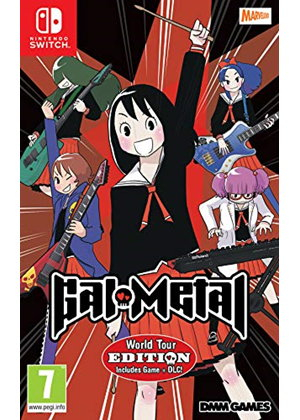 £9.85£19.5950% Free P&P FreeBase.com Deals
Expert (Beta)3
Get deal*Get deal*
Expert (Beta)
3Get deal*Get deal*
Posted 8th May
Product DescriptionGal Metal 'World Tour Edition' Nintendo Switch Game
Gal Metal is a rhythm game designed for Nintendo Switch that turns your Joy-Con into drum sticks. The Joy-Con (L) and Joy-Con (R) produce different sounds, and swinging them together creates a cymbal crash. The game can also be played with a Pro Controller, but no matter how you choose to jam, you’ll be creating awesome drum lines in no time. By fashioning your own beats to the game’s library of songs, you’ll earn metal power that can be turned against the aliens that threaten Earth!
World Tour Edition Additional Content
Rock 'n roll with the World Tour Edition of Gal Metal featuring the base game as well as the entire 'encore' DLC Pack, adding 5 new characters, each with their own unique story and songs, PLUS a reversible inlay and more!
Jam Your Way
A new spin on traditional music gameplay, Gal Metal eschews predetermined musical notes and lets the player create their own drumlines based on over a dozen beats. Practice the beats in your club room after school and wrack up unique combos to blow the aliens away in live performances.
Unique Storytelling
Divided up into episodes ending in climactic concerts, the lighthearted story of Gal Metal unfolds in animated manga panels and text messages brimming with personality. The manga reads right-to-left for an authentically Japanese experience.
Be an After-School Specialist
In between performances to take on the pesky aliens, you’ll manage your own life as a student. Improve your skills and friendships by doing part-time jobs, hanging out with your friends, and jamming in the club room.
Show Your True Mettle
While the basic gameplay of Gal Metal is simple to learn, players who master the beats can earn millions of points by creating complex performances. How much metal power can you score?
PostTweetShare Share with WhatsApp Share with Messenger
Community Updates
Base.com DealsBase.com discount code
New Comment Subscribe Save for later
3 Comments
8th May
Awful game. Not worth the money
8th May

Awful game. Not worth the money