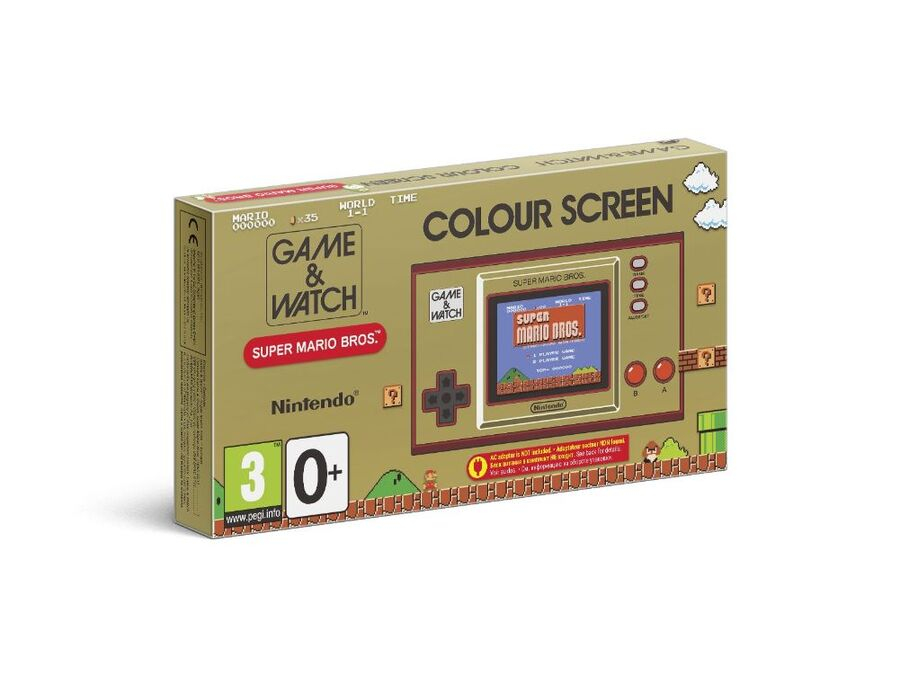 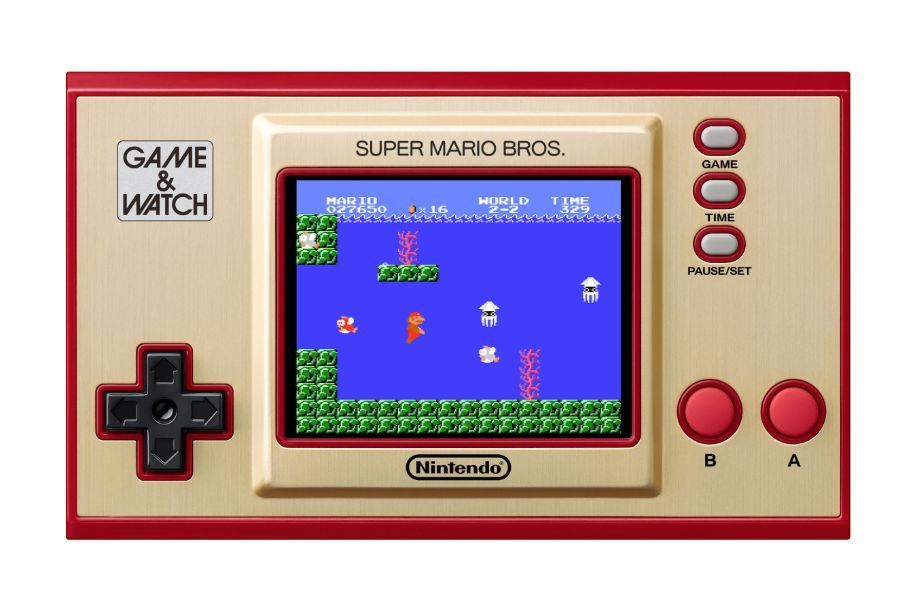 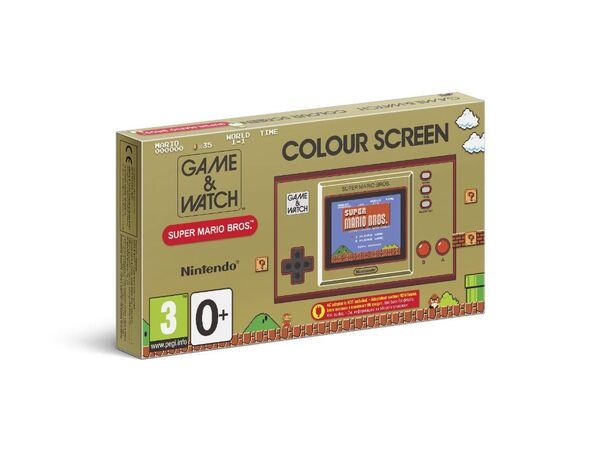 A blast from the past
The original Game & Watch system was released in Japan in 1980 and was the very first handheld gaming console created by Nintendo. Now you can get your hands on a piece of history with a brand new entry in the series – a special golden Game & Watch that includes the original Super Mario Bros., a digital clock and more!

Play Super Mario Bros. – Game & Watch style!
Jump over bottomless pits, stomp Goombas and enter Warp Pipes just as you remember – but with even tighter controls thanks to the system’s +Control Pad. Go it alone or pass to a friend for some two-player competition!

Even more Mario!
Looking for more of a challenge? Super Mario Bros.: The Lost Levels comes packed in, but if you’re wanting a more casual experience, then Ball (with extra Super Mario flair!) should tickle that fancy.

The memories of 80s and 90s games are way better than the reality.
8th Oct

Makes you wonder how many of them will sit in the cellophane wrap forever was expecting £20 tops, £45 is a rob in all honesty, but this is Nintendo of course
8th Oct
I think it’s a nice product but £25 overpriced.
74 Comments
8th Oct
Waste of money, Nintendo sure loves living off nostalgia.
8th Oct
I've only got enough for this or the PS5, think i'll have to go with this.
8th Oct
Love it. Got one on order from Nintendo and one from Amazon. This is cheaper but ill leave it for now. Heat added.
8th Oct

Makes you wonder how many of them will sit in the cellophane wrap forever was expecting £20 tops, £45 is a rob in all honesty, but this is Nintendo of course
8th Oct
Don't do it.

The memories of 80s and 90s games are way better than the reality.
8th Oct

Let the people decide for themselves, at many websites like this

I disagree. I think 2d games generally have aged well especially classics like this. Early 3D games though generally have not. This is too expensive for what it is though.
8th Oct

So true, back then they were current, you played them over and over due to having more free time being a kid so you got really good at them, trying to go back now for most old games is tough
8th Oct

I think it’s a nice product but £25 overpriced.

I think it's pretty cool tbh and worth the money
8th Oct
Can't wait for these things to get hacked to run all NES games.
8th Oct
Had the octopus version of game and watch and a myriad of much cheaper clones. I loved it at the time. Competed all the way round to 0 again.
Couldn’t play more that 5 mins of it now.
£14.99 for the original versions and shouldn’t even be that today.
Sorry, but it seems pretty pathetic to buy one of these now let alone at this price.
This lives in the past.
8th Oct

So true, well for me anyway... bought the nes mini and snes mini... both collecting dust... tbf the snes mini was bought essentially as a Street Fighter II machine:D and the children enjoyed playing the Kirby games.

Same for me too, the snes got more use but they usually end up in a drawer as you don't keep them hooked up all the time
9th Oct

I agree with you, I think it's a tantalising product for collectors and old Nintendo fans though, they did a good job making this desirable in my opinion. But Nintendo do stuff like this with everything, a lot of their fans just mindlessly buy no matter the price, it's why some of their IPs just don't really innovate (Pokemon being the worst offender I can think of recently)
9th Oct

For the collectors - these are available again for pre-order at the Nintendo UK store... so you can get official Nintendo shipping packaging (to leave sealed and unopened) as well as the product box

Problem is, if you leave the packaging sealed, how do you know it's in there...?
9th Oct

for you perhaps, not those buying it.
9th Oct
Retro... hot
9th Oct 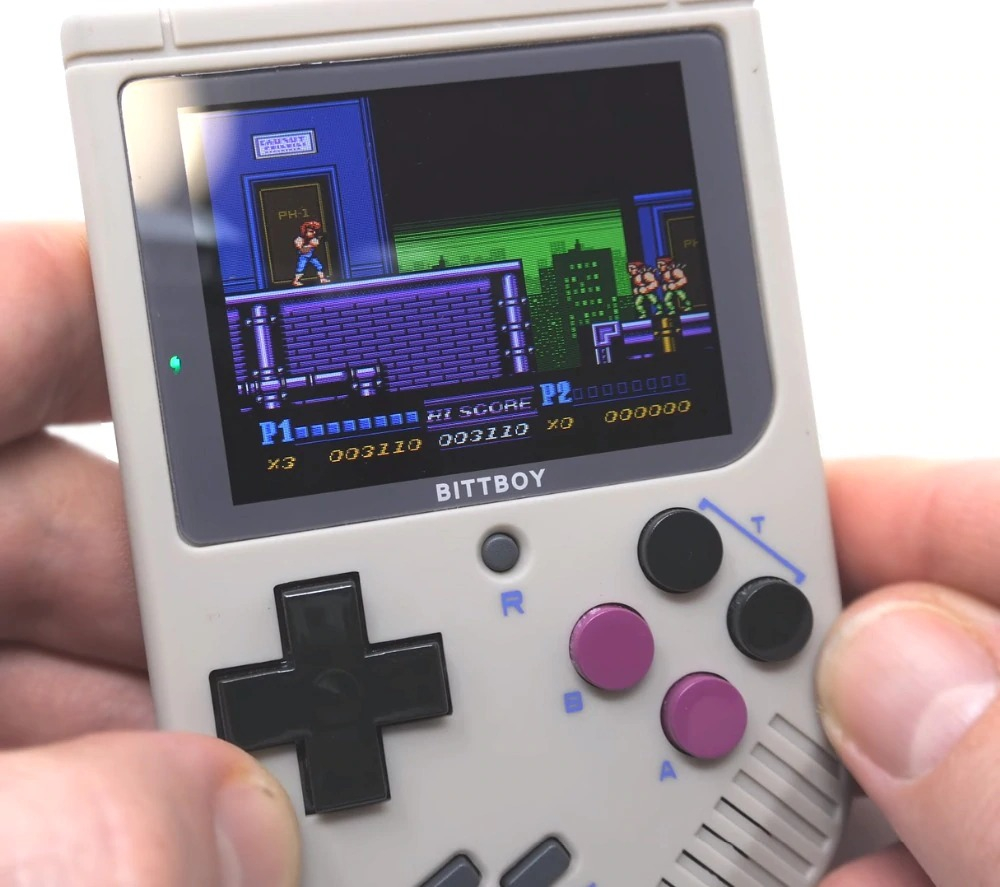 Game and watches were 18.99 when they cane out.

It's inflation, how much were houses back then
9th Oct
It’s lower than RRP so it’s a deal
9th Oct

looks good, do you have to install the games yourself?
9th Oct
May buy it if they do one for Zelda link to the past
9th Oct
Crikey it’s a bit steep at that price... plenty of decent quality handheld emulators to choose from if you need a handheld retro fix
9th Oct

looks good, do you have to install the games yourself?

you have to look in link,i do believe they are preinstaled. there are some cheaper options from around £7 up to £70
9th Oct
ALSO this deadly cheap option..aliexpress.com/ite…794 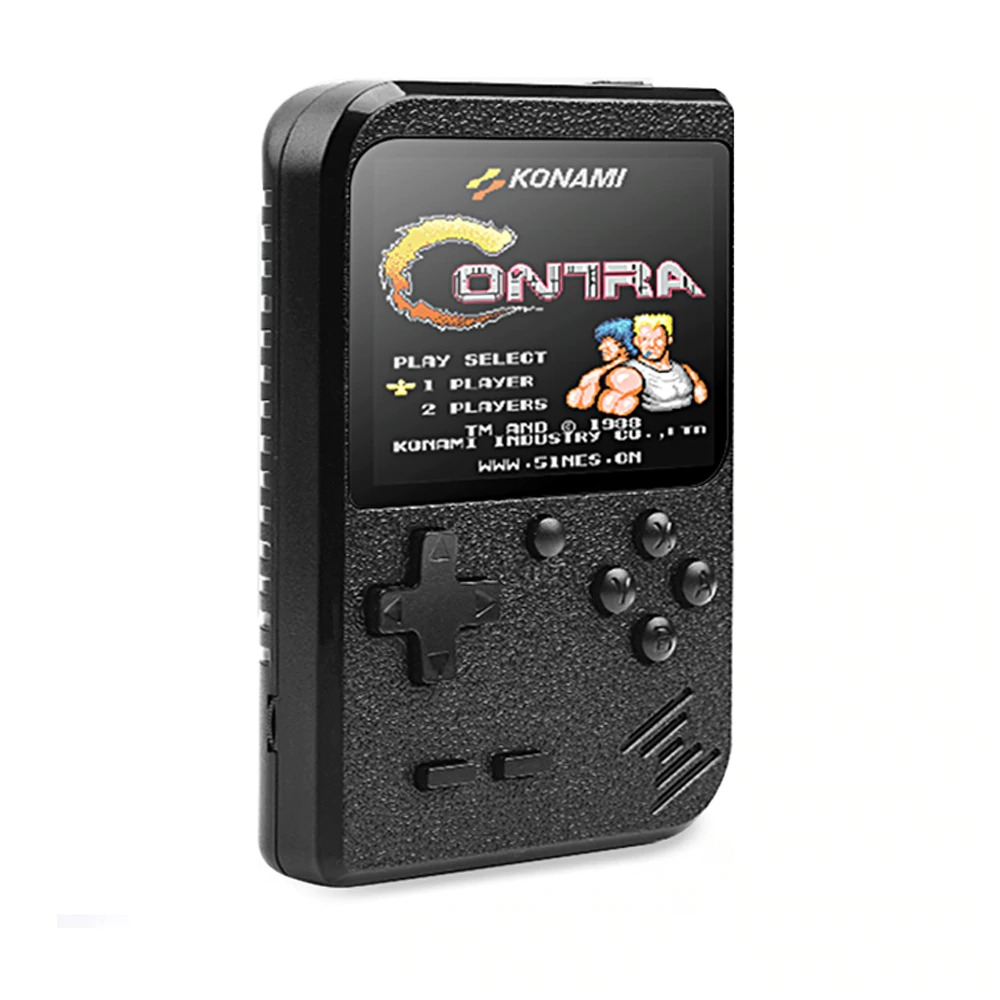 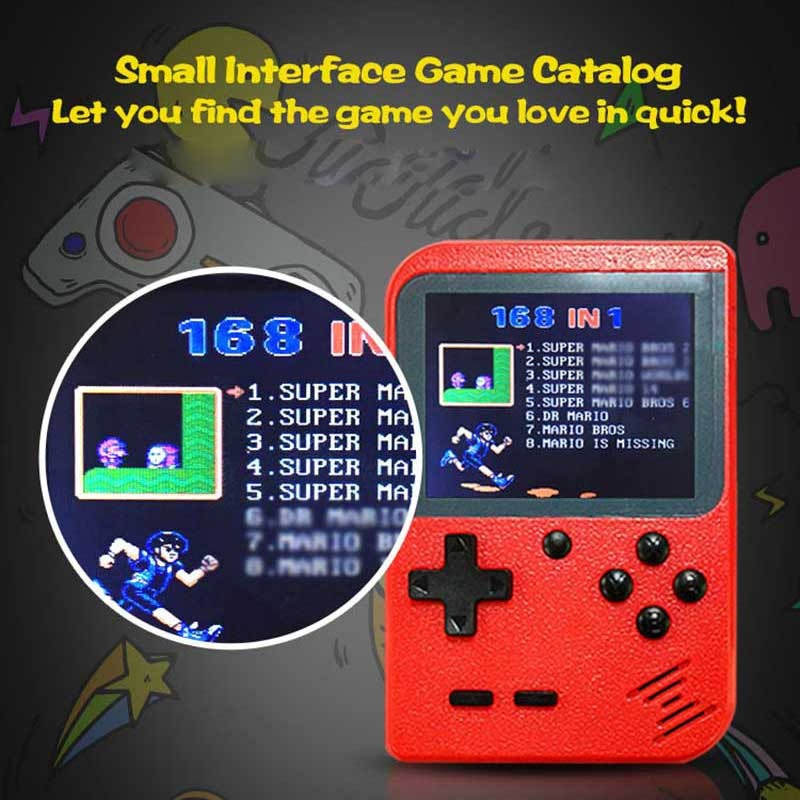 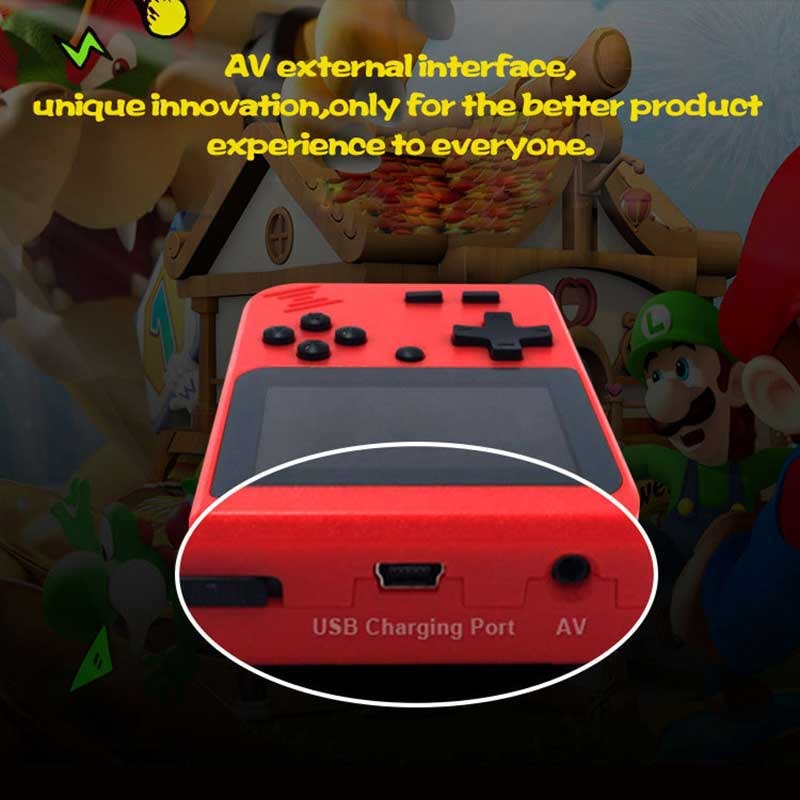 9th Oct
i just recently found cartridges from aliexpress for gameboy advance..aliexpress.com/ite…954
and bought Nintendo Ds Lite to use them.. comes crazy cheap.. nintendo cost around £20 in ebay and cartridges for mario,pokemon ,castlevania,and other good titles just £4 each
9th Oct
The 80's hand held was not in colour! Hardly reliving it.
Edited by: "Trueogre" 9th Oct
9th Oct

I have one of these theses. If only they saved game play
9th Oct

I have one of these theses. If only they saved game play

some of them actually do,as i remember only no action game save works
9th Oct
A month ago my father in law found the wife's old game and watch 2 screen donkey Kong in the attic. New batteries and good as new. Great for nostalgia and pride of place in my games room....
But these are too expensive for what they are imo. If you want nostalgia buy a real one 2nd hand it you want retro gaming buy a pi zero in Gameboy case imo
9th Oct

some of them actually do,as i remember only no action game save works

They do? Most on Amazon clearly say they don’t.

Do you have a link for those products?
9th Oct

one second please i will try to fing,just need to look big amount of aliexpress listings to find where that info was
9th Oct

Don’t worry mate. I am not buying anything from Ali express. I don’t trust them
9th Oct

Game and watches were 18.99 when they cane out. 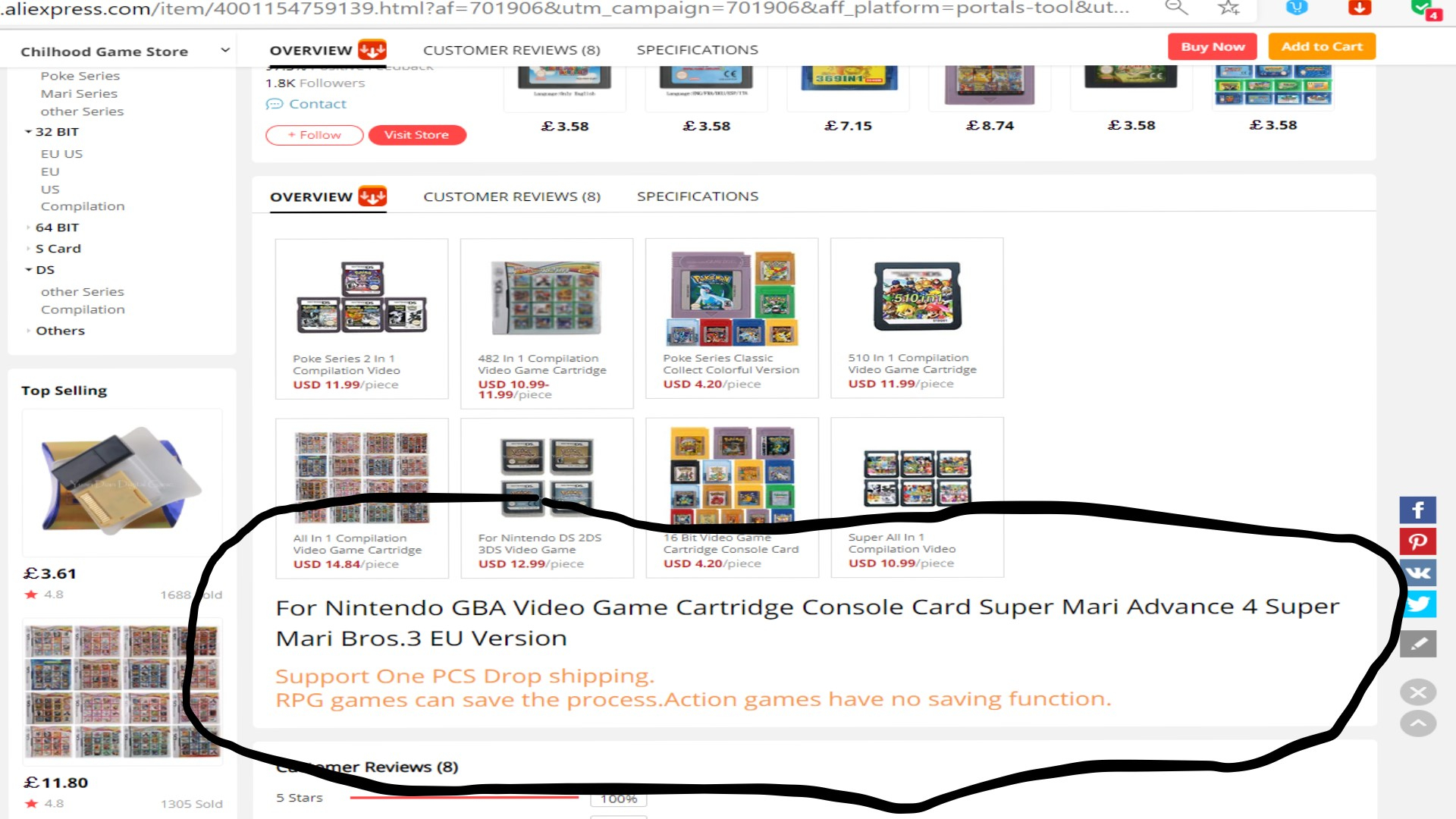 aliexpress.com/ite…843
start from this link and you will see more cartridges around your table.. please make sure you pay no more than £2.50-£3.60 for them with shipping..