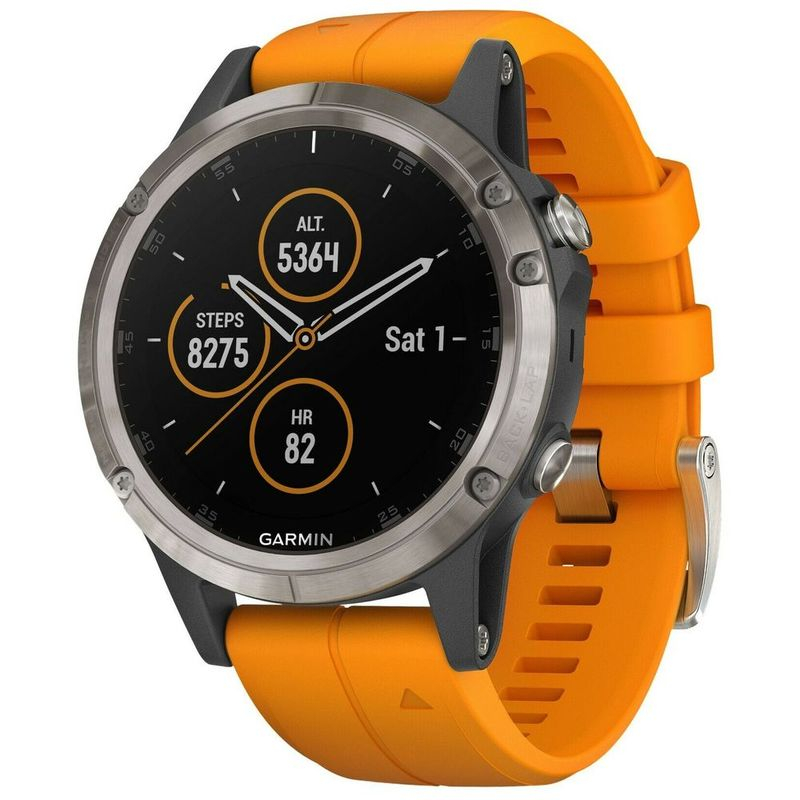 For athletes and outdoor adventurers, the watches of the fenix 5 Plus Series are the high-performance way to beat yesterday and bring your maps and music along. These rugged, premium-crafted watches feature routable colour mapping, wrist-based heart rate, storage for up to 1000 songs and our Garmin Pay ready contactless payment solution.


PostTweetShare Share with WhatsApp Share with Messenger
Community Updates
Sportpursuit.com Deals
New Comment Subscribe Save for later
11 Comments
14th Feb
I have this watch, bought not long ago for a hell of a lot more than this. Great price.
14th Feb
How big is the watch ? Sounds silly but does it make you look like flava flav?
14th Feb

This is the middle size one, I have small wrists and I had the 5X and 6X for a while - they were too big. I have the 6 now (which is the same size as this) and it's a great size and the watch looks sleek enough to wear 24/7 which is what I do.

This Titanium model is really nice, it scratches easily but the weight saving is noticeable and it feels 'special' - the Sapphire glass is very tough and hard to scratch. Also that Orange strap looks great.

Not a lot of extra features in the 6 Pro over this, and if you can justify the price for this 5 Plus, then you basically end up with one of the best-looking, most fully-featured fitness smartwatches on the market.
14th Feb

Not much difference vs the 6 Pro?

– Adds Trendline Popularity Routing Visibility (Pro): This allows you to actually see the ‘heatmaps’ on your device
– Adds map display themes: This includes high contrast, popularity, marine, dark, and outdoor.
– Adds new widget glances concept: Basically shrinks widgets to 1/3rd the screen size, so you can see three at once
– Adds new PacePro feature: This replaces old-school paper race pace bands, creating pace targets for race based on grade/reverse splits/etc…
– Adds new Power Manager feature: Gives detailed information about the impacts/tradeoffs of features on battery life
– Adds new Power Modes feature: Allows you to create custom power/battery modes, with time remaining per activity
– Adds new MARQ Expedition ultra-long mode: For multi-week GPS activities. Basically shuts off everything except reduced rate GPS tracking
– Adds ski resort maps: These started on the MARQ series, with 2,000 ski resorts worldwide
– Adds golf maps pre-loaded: Previously you had to manually load these one by one, also, more detailed golf features
– Adds support for wrist-based swimming HR: This was teased recently on the FR945 beta updates
– Adds new ultra-low battery mode: Gets up to 80 days of battery life, but super basic watch functionality only
– Revamped ClimbPro with new coloring: Now matches the Edge 530/830 styling
– Increased data fields per page: Up to 8 fields on the 6X, and up to 6 fields on the 6S/6
– Increased screen size and reduced bezel (varies by model, but up to 36% bigger screen size on the 6X
– Reduced ‘lug to lug distance’ on Fenix 6S: This should help those with smaller wrists, more on this later
– Reduced thickness of all devices. The 6S shrunk by 10%, the 6 by 7%, and the 6X by 15%.
– Changed from MediaTek GPS chipset to Sony GPS Chipset: Like every other new Garmin 2019 device
– Battery life increased
– Added PulseOx (pulse oximeter data): Within Fenix lineup it was previously only on the Fenix 5X Plus variant
– Added Respiration Rate (post-activity, also as a data field): With chest strap only
– Added new Garmin ELEVATE optical HR sensor: This is the V3, same as MARQ/FR245/945 sensor.
– Added training load focus stats: Shows how workouts benefit a given target/focus area
– Added deeper training effect details/metrics: Further details on the impact of a workout
– Added body battery functionality: Kinda like Street Fighter body energy levels
– Added heat acclimation: For any workouts in temps over 71°F/21.6°C
– Added altitude acclimation: For any time or workouts spent above 850m/2,788ft
– Added Incident Detection: If you crash your bike it notifies someone (this was recently added to the Fenix 5 Plus via firmware update)
– Added Safety/Tracking Assistance: You can press button to send help alert to friends/family (this was recently added to the Fenix 5 Plus via firmware update)
– Revamped race predictor to be a bit more strict on predictions (more than just VO2Max lookup charts now)
– VO2Max now compensates for heat: Previously it didn’t
– Training Status now compensates for heat: Previously it didn’t
– Redesigned a bunch of the user interface, especially for post workout stats
(courtesy of DC Rainmaker)
14th Feb
I read that review before I bought the 6 series. You’ll notice none of those are killer features and mostly software tweaks.
14th Feb
Help please: I have the sapphire fenix 5... mainly for gym/walking and most importantly... golf. My fenix 5 has to "update" every time I am on a new course... even if I have played it before. Recently one particular course will not upload to my watch even though I have it on my "connect" list. Does this watch already have the courses on it.. or will I still have the same problem.
Cheers for any help with this.
15th Feb
I'm genuinely interested, but I was looking for the vivoactive 4 as I want something for logging my road cycling.

Not if you just want something to log your road cycling. In fact you don't even need the vicoactive 4 which is still quite expensive, still being a relatively new model.
15th Feb

I have this model, it does scratch easily, however you can polish them out easily as well.
15th Feb

I’ve just come to live with the scratches and wear on mine - I’ve got some on the edging and the titanium strap collects the most wear, but it’s comfortable. Much more so than a stainless steel strap I find.
15th Feb

Thanks for your reply. I looked at all the models and it seems the vivoactive 4 has some pretty good features above other models. I was looking at that or the fitbit ionic, but I've decided on the former....unless I come across something better.

Which model were you thinking?