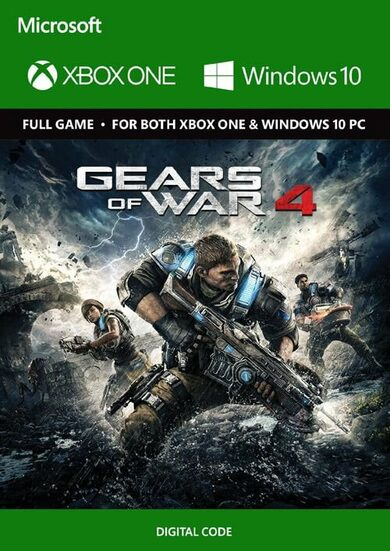 Gears Of War 4 (PC/Xbox One) keyGears of War 4 key brings an intense FPS game full of blood, gore, and non-stop intense action! The game was developed by The Coalition, and truly, if you’re of a thrill-seeking nature, this title is certain to fill up your excitement bar to the very maximum. The fourth title follows a narrative set 25 years after the events on the trilogy, and it offers a bunch of old and familiar as well as new and never-before-seen elements!

The Old but Gold Features

Buy Gears of War 4 key and immerse in a game filled with difficult choices, nerve-wracking survival-horror scenes, and breathtaking narrative! As in the previous releases, the game offers gameplay variety and tons of room for replayability. If you’re a Gears of War fan, then this title will closely resemble the very first Gears of War game, and even though nothing can better off the original, Gears of War 4 may as well have done the impossible.

Experience the new combat mechanics with Gears of War 4 key! The sequel changes the ‘cover-based shooting formula’ by a fair margin. The enemies and monsters you’ll have to face now have different attack patterns, and thus, you’ll have to use innovative offensive and defensive mechanics as well! Arm yourself with patience and prepare to face a whole list of devastating foes all throughout the game, though, an array of new explosive firearms may ease your trials.

Buy Gear of War 4 key and enjoy the experience together with other players! Whether you want to go split-screen with your friend or try out the online co-op, you’re sure to have a memorable playthrough! And that’s not even all, the game’s online co-op for PC version also supports the cross-platform play! The Gears of War 4 title also includes numerous fun and entertaining gameplay modes which you most definitely must try out!
PostTweetShare Share with WhatsApp Share with Messenger
Community Updates
Eneba Deals
New Comment Subscribe Save for later
8 Comments
14th Jan
What is the site like to buy from? I've never heard of the site before. How does it compare to CDKeys if you're a new customer?
14th Jan

Only used them for the first time very recently, but not had any problems to speak of.
14th Jan
Used to buy PSN credit several times. Never had any problems. Always sent the codes through instantly.
14th Jan
Is this digital or physical?
14th Jan

Is this digital or physical?

this was a lot better than Gears 5

It's actually not as good as Gears 5 imo, thought the open world aspects were fantastic, and a lot less fighting robots rather than proper 'monster' type enemies.

The franchise is a little tired, but the female protagonist wasn't a problem at all for me.