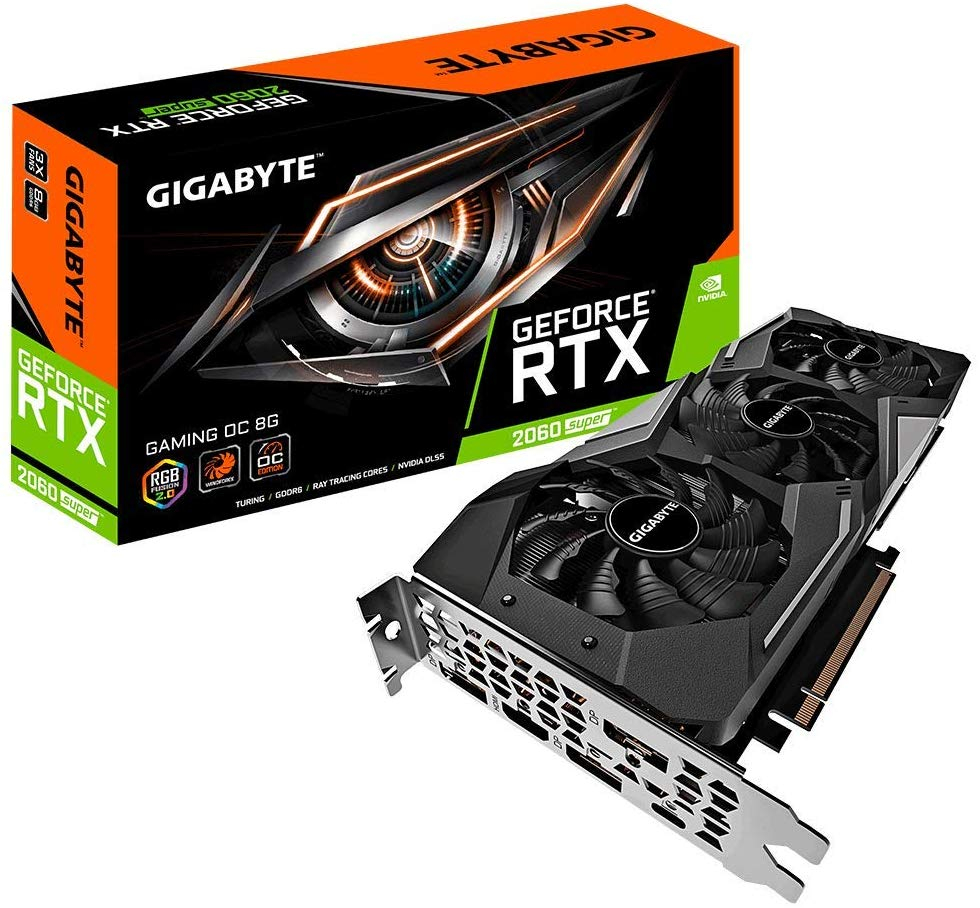 Edit: Now out of stock at both Amazon and Overclockers.

This is the lowest price it's been on Amazon - looks like they're matching Overclockers.co.uk

The 5700XT equivalent is better value in most cases, but if RTX is important to you or you just really want a 2060 Super then this card has really good reviews and Gigabyte has a decent reputation for how it deals with RMAs.

This idles with stopped fans unlike the cheaper Gigabyte Windforce and MSI Ventus. It also has the potential to overclock better than the MSI Gaming X as it's not as power limited.

Blurb:
PostTweetShare Share with WhatsApp Share with Messenger
Community Updates
Cyber Monday 2020 DealsAmazon DealsAmazon discount code
If you click through or buy using any of our links, retailers may pay hotukdeals some money, but this never affects which deals get posted. Find more info in our FAQs and About Us page.
New Comment Subscribe Save for later
11 Comments
2nd Dec 2019
Was £339 on Friday and is cheaper than Amazon at Aria so this deal isn't the best.

I was hoping it would drop a bit more but looks like I should have gone for it then.

Hmmm, as far as I can see it was only the Gigabyte Windforce that was £332.38 on Friday - it's the Windforce that you've linked to at Aria. Aria only have the white version of this card in stock which is £410.89 plus shipping.

I've been tracking its price on PCPartPicker for a couple of weeks and it's the lowest I've seen (I ended up buying it). It's also the lowest price on CamelCamelCamel.

Ah...my apologies. It's far too complicated

I've mixed them up too at times. Gigabyte need to differentiate their product line a bit better
2nd Dec 2019
Seems people aren’t realising this is a premium model. Voted hot!
2nd Dec 2019
or there's this one a lot cheaper,scan.co.uk/pro…als plus it comes with free modern warfare game
Edited by: "n1ttygr1tty" 2nd Dec 2019
2nd Dec 2019

I posted this as a deal the other day and hadn't realised it was the 'premium' version. Makes it even better. Think I'll get my wallet out...
2nd Dec 2019
yeah its a good deal, tho if like me and you like RGB it doesn't have it on the card like other cards, not that it matters price wise its the best out there as far as I can see, when you include the free game on top aswell makes it even sweeter.
2nd Dec 2019

The Ventus is a good deal, especially if COD is important to you. The MSI Gaming X is more comparable to this though as far as the premium overclocked model goes - the Ventus doesn't idle with stopped fans, has lower and very limited OC and has a plastic backplate. It also doesnt have RGB, not that I personally would make a choice base on that :). I've seen different reviews saying it's both loud and quiet. The thermals seem to be consistently good with it though.
2nd Dec 2019

Same! Pulled the trigger on this myself. Glad I did as the people who know what they are talking about clearly snapped this up too, it’s not in stock from amazon anymore!
2nd Dec 2019

‌ Glad you got one! Thanks for letting me know it's OOS. Seems sold out at overclockers too... guess I expire this now....