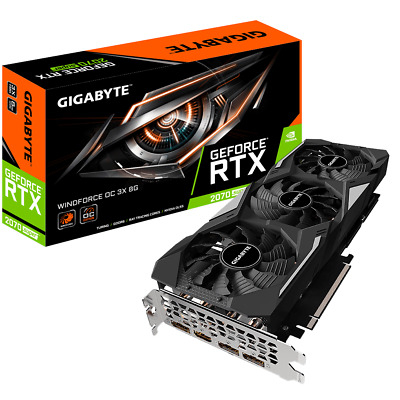 Very good card for the price, the white version is also priced reasonably at £425.89 if that interests anybody: ebay.co.uk/itm…df5‌

The shape of the pure copper heat pipe maximizes the direct contact area with the GPU, enhancing heat transfer. The heat pipe also covers the VRAM through a large metal plate contact to ensure proper cooling.

Support for NVIDIA NVLink™ (NVIDIA SLI) technology, which combines 2 identical GPUs with an GeForce RTX NVLink Bridge to deliver the ultimate experience in 4K gaming or VR gaming. You can also adjust the light effect on the bridge with the AORUS Engine.

Man this is just wrong information, it's hardly older tech and Ampere hasn't got a release date. The closest thing to a release date is Q3 2020. At the minute it is looking like 25% increase in performance but paying the usual £600 or so on release.
Edited by: "tony_dudz" 3rd Feb
3rd Feb

since when has has it ever been more? when it is slap yourself in the face
4th Feb

By this Logic then the the price will always be the same regardless of what generation. Remember the 980Ti retailed at £550, then the 1080ti came out and retailed at £699 then the 2080ti comes out and regards retails at £1200.

Also, the only evidence of any crazy performance boost is on the RTX cores which will mean little to most gamers for the time being. I don't know where you are pulling your figures out of but if you can try to argue your point a bit better then people would tend to try and see the argument from your perspective.
4th Feb

since when has has it ever been more? when it is slap yourself in the face

And when it isn't just bang your head against the wall. Don't forget to start running in wall's direction before that.
4th Feb

You have zero info on how much any card will be. It will be dictated by the wafer costs and then competition. The nvidia gfx product stack is a mess.

Timing wise, will also be up in the air, again down to supply and wafer issues.The only people who have a clue is Nvidia. If you want to see how supply causes issues, look at the 3900x and 3950x being in short supply (with the 3950x being delayed).

Intel and Nvidia fudge the most with benchmarks with amd in 3rd.
4th Feb

LOL, Ok man. So 1 or 2 generations mean that it will always be the same price then? You do understand that it comes down to resources and supplies. If you would just calm down you would begin to understand. If AMD don't produce anything relative (performance wise) then the price could go up. If BIG Navi does produce good results then the price will go down. All i'm saying is that you can spout random assumptions as facts. Like you have multiple times in this thread.
4th Feb

No i go off basic common knowledge.. when in history has the 70 model EVER jumped 200 quid in a year? use your miniscule brain before spouting turd everywhere