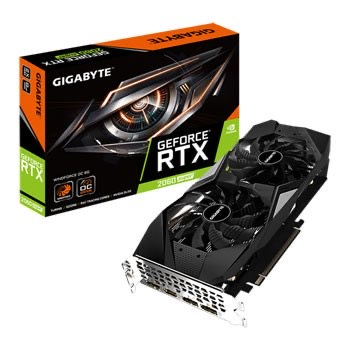 Seems like a decent deal for the rtx 2060 super and a free modern warfare code which you could also sell if you wanted. £350.47 including next day delivery @ Scan.

Gigabyte GeForce RTX 2060 SUPER WINDFORCE OC 8GB GDDR6 Ray-Tracing Graphics Card, 2176 Core, 1470MHZ GPU, 1680MHZ Boost.
PostTweetShare Share with WhatsApp Share with Messenger
Community Updates
Scan DealsScan voucher codes
If you click through or buy, retailers may pay hotukdeals some money, but this never affects which deals get posted. Find more info in our FAQs and About Us page.
New Comment Subscribe Save for later
29 Comments
26th Nov 2019
Is there much difference between this and the 2070s in terms of performance
26th Nov 2019

I'm guessing there's nothing wrong with future proofing the system? Of course if the budget allows.

There is nothing wrong with it no, it's not necessarily cost effective to invest in this card unless you want to play 1440p right now though. Sooner or later games are going to be using more and more VRAM and higher clock speeds... in 2 to 3 years time these RTX cards won't hold up very well in 1440p (Unless you've got a 2080).
26th Nov 2019

You'll get both with your super I would say. Playing at 144fps is easily achievable in the large majority of titles. Especially esports titles where you're going to want that extra frame rate. For the titles you can't quite squeeze out the last few frames drop the shadow quality down and it'll skyrocket back up.

Wow interesting. Are both your CPU and GPU overclocked?
26th Nov 2019

Wow interesting. Are both your CPU and GPU overclocked?

No, neither of them are overclocked I haven't needed to yet. There will always be some games you cant build for right, like Monster Hunter plays like ****. I get 60fps on that game in 1440p ultra because the optimisation blows. Other games like Warframe on ultra I'll hit 150-160fps.

Then there's the games in the middle - Battlefield, where it'll hit about 110-120 on ultra, however like I said, most of the games frames seem to be made up in junk like shadows. I usually just scale shadows down in most games and get way more FPS.

Edit: For a more recent example, Red Dead easily gets about 75fps but that's not really a game you'll want FPS for, and that game is terribly optimised too.
Edited by: "steve_bezerker" 26th Nov 2019
26th Nov 2019

I've been looking into this.

There appears to still be issues for a fair number of people (that's downplaying to be honest) with the AMD drivers. I read enough for it to be a major concern for me. It's a pass for me presently.

Ah I have heard about the buggy drivers, I've never owned an AMD card or the CPUs. Always been on the blue and green team. But recently with the Ryzen processors and Intel taking us for absolute muppets, I'm thinking about a Ryzen build and saw the 5700 XT being a decent card within that budget. But might be sticking to Nvidia if the drivers to get sorted out. Thanks for the info!
26th Nov 2019
reckon this will drop a bit more? was planning on getting a gtx 1660 for my first ever pc. was hoping for it to drop close to £200.
26th Nov 2019

Your CPU and RAM will obviously play a part in it as well. Good luck for the deal mate
26th Nov 2019

You can't go wrong with the Ryzen CPU market. I bought into it in the first generation (1600) and it's been nothing but stellar. Hoping for a cheap 3600 during the sales.

As for cards... The drivers used to be great. I was Nvidia all the way back in the early 2000s. Then got a xfx 5770 and then a 270x and both were great. It's a problem with their new architecture. The 5700xt is a great card in of itself. If they can make it properly stable, it's a no brainer. Just wouldn't personally recommend. Pretty much everyday on r/AMD you'll see a "what's the status of the 5700". Worth reading if you want to get a better idea of what's going on.

If my Palit 1060 hadn't sadly conked out a week ago, I wouldn't even be in the market. So I'm just hoping that the sales are good enough on Friday to make it worth buying into the 20 series, as I'm kinda stuck between gens at the moment. The new nvidia lineup it's rumored for April.

I think you are being a bit dramatic about the 5700/XT, whist there were some issues during the early drivers they didn't affect everyone. Issues with DX9 titles, 75Hz monitors, and hardware acceleration in certain applications for the most part is resolved, with further minor issues for very specific use cases maybe exaggerating the actual number or severity of the problems being seen.

Buying a card now after all of this has been solved is putting you in a better position, and it is better then having hardware issues that cannot be resolved unless you RMA your card (looking at you RTX GDDR6 RAM).

I was planning on going for a Ryzen 5 3600 and Rtx 2060 super build. Have only bought my case and CPU so far, would you recommend I go for the 5700XT? As mentioned above. all the driver issues put me off as this is my first PC build and hopefully looking forward to gaming smoothly and without encountering problems initially
26th Nov 2019

Go with what you are comfortable with, it is different for the average user as opposed to a lifetime professional, just don't overpay. I'll have a look to see what other 2060S cards are around.
26th Nov 2019

Well.. they aren't my comments. I don't own the product, so I have no biase either way.

They're comments from people who have 5700 and 5700xt's. Sure, you always have to be careful of listening to the small minority and not the vocal majority, but it's enough for me to hold back.

Is it enough for you? Who knows. That's up to each individual to make their own decision. I'm simply informing someone of what I found during my research. Some people have had zero problems since day one. Others have had many issues.

But just for reference.. this is AMD's own list of known issues still.

Performance Metrics Overlay may cause stutter or screen flashing on some applications.

Toggling HDR may cause system instability during gaming when Radeon ReLive is enabled.

AMD Radeon VII may experience elevated memory clocks at idle or on desktop.

Invoking Radeon Overlay may cause games to lose focus or become minimized when HDR is enabled within Windows®.
27th Nov 2019
I can't really tell if this is a good deal or not. I'm currently still running a GTX 970, skipped the 10 series, was tempted by the 20 series on release but the prices were just insane.

My Dell S2716DG recently died just outside of it's warranty (typical) so i'm now running 1920x1080 @ 165hz which i'm actually really liking so i've been looking for a 1660Ti or a SUPER on black friday. I keep reading a 2060 or 2060 SUPER is too overkill for 1080p but surely this would be better for the long run? I'm not even remotely interested in the ray tracing.

Is anyone else stuck in the 9 series upgrade dilemma?
27th Nov 2019

Lmao I can relate except i haven’t built my first pc yet. Literally have no idea on which card to pick. Rtx 2060 super or 2070 super or 5700xt or whatever. Planning to play on 144hz @ 1080p as well but I also want to buy a 1440p monitor for story games. Just waiting until Black Friday to see which card has the best offer and will go for one of them
2nd Dec 2019