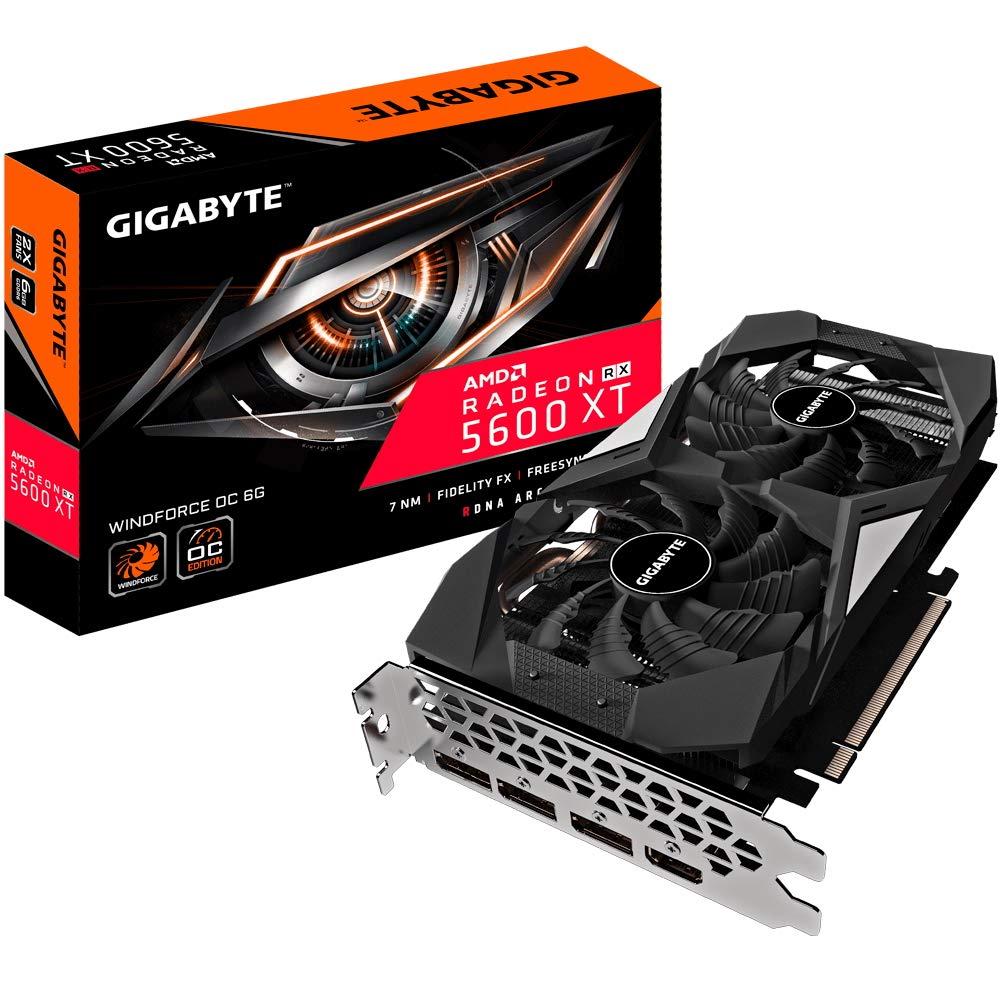 Is saying that delivery will be 1-2 months presumably due to low stock as the card is very new. This is an extremely good price though, usually £255-300.
PostTweetShare Share with WhatsApp Share with Messenger
Community Updates
Amazon DealsAmazon discount code
New Comment Subscribe Save for later
Top comments
24th Jan
Gigabyte provides your choice of two VBIOSes to download for its Radeon RX 5600 XT Gaming OC model (GV-R56XTGAMING OC-6GD). You want the 180W “FA0” version, which boosts the board power and cranks the GPU and memory clocks, similar to the Sapphire Pulse we’ve tested. The company’s Windforce OC Radeon RX 5600 XT doesn’t offer a performance-boosting BIOS at this time. <- something i saw from a reviewer of this. it may come or it may not come, just a little warning. could be a reason why its price dropped. even if it doesnt its still a TI killer!... and at £218 bargain.. all to possible gain.
Edited by: "sarden84" 24th Jan
24th Jan
Quick search online indicates this is one of the lesser models that won't get the bios upgrade, God what a fiasco of epic proportions this launch has been, it wouldn't surprise me if more models will be discounted to around this price in the near future.
63 Comments
24th Jan
Amazing deal!
24th Jan

Can't quite believe it! I've ordered one for myself
24th Jan
Great price on this and with it shipping late hopefully will come with the better memory and no issues
24th Jan
AMD drivers tho.
24th Jan

Fingers crossed by the time this ships they'll iron them a bit, I said this morning I'll never get one of these and here i am ordering one, thanks hotdeals
24th Jan
Gigabyte provides your choice of two VBIOSes to download for its Radeon RX 5600 XT Gaming OC model (GV-R56XTGAMING OC-6GD). You want the 180W “FA0” version, which boosts the board power and cranks the GPU and memory clocks, similar to the Sapphire Pulse we’ve tested. The company’s Windforce OC Radeon RX 5600 XT doesn’t offer a performance-boosting BIOS at this time. <- something i saw from a reviewer of this. it may come or it may not come, just a little warning. could be a reason why its price dropped. even if it doesnt its still a TI killer!... and at £218 bargain.. all to possible gain.
Edited by: "sarden84" 24th Jan
24th Jan
Quick search online indicates this is one of the lesser models that won't get the bios upgrade, God what a fiasco of epic proportions this launch has been, it wouldn't surprise me if more models will be discounted to around this price in the near future.
24th Jan

It will still be covered under the warranty after the flash or you could always RMA to Gigabyte UK and have them do it for you if you're too worried which I'd imagine they would happily comply with Heat for a great price though, you'd most likely get it much sooner than the 1-2 month estimate, that is probably there as a placeholder until more stock comes in.
24th Jan

I'm not entirely sure what you're saying here?
There's two bioses, but it doesn't offer a boost? It may or may not be available?
24th Jan

It means that for this model there isn't any bios updates so it will be about 10% slower then the higher spec models,
24th Jan

He means its most likely from the first batch which has the older bios with lower clock speeds, but gigabyte offer the updated bios to download and flash onto the card.
24th Jan

But there's no guarantee this particular model will ever receive the upgrade, you couldn't do the upgrade if they don't release the bios and as for the moment its within amd specs so you can't RMA it for that, it's just a total mess this launch the likes of which there hasn't been in ages.
Edited by: "Cuddl3s" 24th Jan
24th Jan
This is awesome.

This card is better than a Vega 64 and will play any game in 1440p on high (few settings off) around 60fps. In PC gamer 10 game average it got 68 fps in 1440p. This is the price it should be, though, at £250 one should stretch to the 5700.
Edited by: "zeb.mattey" 24th Jan
24th Jan
There is 2 versions of the 5600xt by Gigga, one has bios updates in jan, the wind force one does not have a bios update at this time, it may get an update later on.. it may never get a bios update to the level of other version by giga. so a little warning to folks who may jump out thinking oh sweet in 1/2 months this will be updatable. it may not which may be the reason for it being dropped down.

The alternative idea of AMD's were rather then do these BIOS updates at the last minute due to the panic of the 2060 dropping... were to do a price down and never compete with the 2060 at all.

I imagine the Bios will be available. This chip isn't fundamentally different to the others, it can do what they can, just a lamer cooler but that won't matter.
25th Jan

great reply back. one straight back at you. then whys it not here 4 days later?.still.
25th Jan

It has a bios, there is no difference from this and the later batches other than the bios upgrade.
25th Jan

Youve missed the whole point the bios will be available only for the over engineered models(which this is not) , you can't get more bandwidth out of memory that is not capable of hitting higher speeds it's that simple, even so this is nothing more than factory overclocking cards to their limit I imagine the failure rate on these vbios overclocked cards will be much higher than cards that don't.
25th Jan

Pretty much all the cards have 14gb memory chips. MSI probably cheaped out or using it as an excuse to sell lesser rated memory equipped cards for the same price. Not surprised considering how lacklustre some of their recent graphics cards and motherboards have been. Nonetheless this is still a good price.
25th Jan
Hence the reason i said still a good dam card even if its the original to be n will be perm.. TI-KILL. £220 steal.. all else "POSSIBILITIES" but lets not give folks "newbies".. false hopes.
25th Jan
Good deal but if it cannot have the new bios Im not bitting.
25th Jan

No it’s on AMD, they also should have had more designations like XTE or just X or something.
25th Jan

Fair point it was a bit of a mess,but after the initial batch all the future cards should be running at the higher speed anyway.
25th Jan
Some one will drop a flash Rom for it anyway or you will be able to overclock the base BIOs I would think anyway
25th Jan
Wonder how many other cards with small heatsinks are unable to upgrade.

The reason of lack of BIOS for this card is lack of efficient heatspreading solution.
You can cranck up fan speed to 70-80% but it doesn't make any sense hence the sale.
They want to just evaporate the existing stock with minimal loss.
25th Jan
Its good value, just remember that bios may not come and you will be stuck with the lower performing version.
Hardware Unboxed benchmarked 5600xt on both bios so you can see the performance difference.
The launch was a spectacular mess.

If you choose to buy a different one then make sure to know whether the bios is available and whether it boosts clock speed and memory or just one.
25th Jan

worst case scenario you should be able to use soft power play tables to unlock it yourself or use another bios that has the performance unlocked. As long as the memeory is the 14gbps spec it should do it with no problems, if its not validated it might be a case of trial and error
25th Jan

They'd already released comparisons with it, so would be embarrassing, then again, they have this launch, on roof many now unfortunately.

AMD didn't want to adjust prices, this obviously has a knock on effect accross all gpus.

Either way consumer wins. This is a decent card, prices are down, still overpriced, but atleast they've come down a little.

Hopefully it gives AMD a lick up the a**e. Perhaps they'll manage to outmanoeuvre Nvidia with big Navi, which will have a large impact on price.

They only worrying thing is AMD still seem to be behind Nvidia playing catch up, I hope they can bring something good, the market needs it.
25th Jan
Hi guys what kind of power supply would run this??? Thanks
25th Jan
To all the people saying to flash it to get it running at its peak. Yes, down the line with more bios tweaks, probably possible. But - this card is down the lower end so comes with a cooling solution to match. No point having this card flogging it’s guts out if the fans are going nuts to try and keep a lid on things.
Edited by: "ollyprice87" 25th Jan
25th Jan
Showing as unavailable on Amazon now, I guess they have sold the stock they have coming in with the older bios
25th Jan
What were AMD thinking/ Such a ridiculous launch.
They should learn from their cpu division how to manage pricing.
Shows how much they nerfed the product in the first place.
25th Jan
I have a vega 56 sapphire which I could return and get this for no price difference but not to sure if it’s worth it as I would game at 1440p not 1080p.

Hi guys what kind of power supply would run this??? Thanks

See a question like that depends on the pc built, Tho 600watt is a sweet spot
26th Jan
Appears to be available to order again if anyone missed it
27th Jan
I think I'll wait for the 5700 xt to drop in price.
27th Jan

If you check the hardware unboxed videos, then not as straightforward as what the other person says.
There are two versions of 5600XT one thats got the overclock and one that hasnt. The overclocked one is about 10% faster and on par with a 2060.

This one does not have the updated bios and may or may never get it. 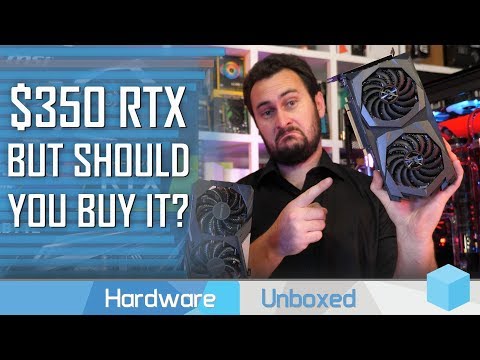 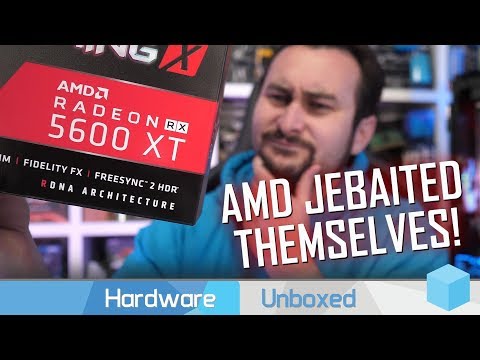 thanks can you give me the extra cash to get one then. The point I asked was because both cards are the same price the vega 56 and 5600xt but the vega has the extra 2gb ram and wanted to know if it would be better. but what your saying is the vega 56 would be better por 1440p as it has 8gb ram