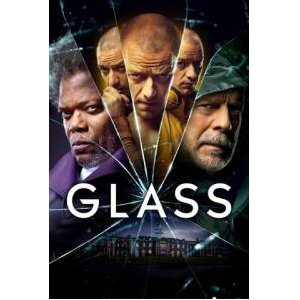 M. Night Shyamalan brings together the narratives of two of his stand-out originals—Unbreakable and Split—in one explosive comic-book thriller. Following the conclusion of Split, David Dunn (Bruce Willis) pursues Kevin Wendell Crumb’s superhuman figure of The Beast (James McAvoy) in a series of escalating encounters. But the shadowy presence of Elijah Price (Samuel L. Jackson)—known also by his pseudonym, Mr. Glass—emerges as an orchestrator who holds secrets critical to both men, in this riveting culmination of Shyamalan’s worldwide blockbusters!

iTunes Extras
iTunes takes you deeper into the Glass universe with a trove of Deleted Scenes and Featurettes. Experience A Conversation with James McAvoy and M. Night Shyamalan, in which the director and star discuss the importance of originality when creating a film in this genre; get an in-depth look at the animalistic face-off between David Dunn and The Beast; and explore the film’s score, visual effects, music, collection of main characters, stunts and more. Plus an Alternate Opening—and Exclusive Glass Decoded, available only on Digital!
PostTweetShare Share with WhatsApp Share with Messenger
Community Updates
ITunes Store DealsITunes Store voucher
If you click through or buy, retailers may pay hotukdeals some money, but this never affects which deals get posted. Find more info in our FAQs and About Us page.
New Comment Subscribe Save for later
14 Comments
18th Nov 2019
Anyone know if 4K version gonna be on itunes?
18th Nov 2019
This could have been a great movie, such a shame.
18th Nov 2019

This could have been a great movie, such a shame.

such a dissapointing movie
18th Nov 2019

Anyone know if 4K version gonna be on itunes?

Anyone know if 4K version gonna be on itunes?

This is the first time it's been bellow £9 on ITunes, what makes you think it will drop again?
18th Nov 2019

This could have been a great movie, such a shame.

yup such a dissapointing movie

I agree, not the best. Split didn't do it for me either. However if it had been Unbreakable 2, without the Split character it could have been so much better.
18th Nov 2019

I wasn't following the iTunes deals last year, I've only started since they announced the launch of the Apple TV app. I guess I'll wait and see what come up during those deals, but this is a good price at the moment.
Edited by: "peter1969uk" 19th Nov 2019
18th Nov 2019

Agreed and not knocking the deal - but thought worth pointing out as the deals last time were crazy! Do a little search on here and you’ll see the kind of stuff that was on offer. People spent a lot of money but got some amazing bargains.
18th Nov 2019

I'll be doing the same if they come down to good prices.

Start saving your money - I think this will be something they do every year with last year being the first! It generates so many sales for Apple and people who then buy into the Apple TV world so it’s a winning promotion for them.
19th Nov 2019

I'll be doing the same if they come down to good prices.

ITunes had a sale around the start of the year that had a ridiculous amount of titles, including loads of new ones for around only £2.99. Was the best sale to date tbh.