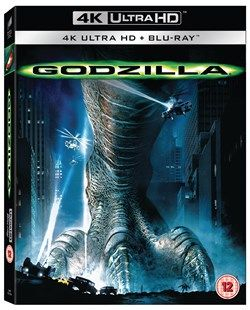 Used code SIGNUP10 and my secondary email and paid with PayPal.

Following the French atomic bomb tests in the South Pacific, an unknown creature is spotted passing through the Panama Canal. Scientist Niko Tatopoulos is called to investigate the matter, and he quickly arrives at the conclusion that a giant, irradiated lizard has been created by the explosions. Godzilla® then makes its way north, landing in Manhattan to begin wreaking havoc in the big city.
Special Features on Blu-ray Disc
• Visual Effects Commentary
• Behind the Scenes of Godzilla® with Charles Caiman
• All Time Best of Godzilla® Fight Scenes
• “Heroes” Music Video by The Wallflowers
• The Ultimate Godzilla® Multi-Player Trivia Game
• And More!
PostTweetShare Share with WhatsApp Share with Messenger
Community Updates
Zoom DealsZoom voucher codes
New Comment Subscribe Save for later
2 Comments
31st Jan
The picture on this is suprisingly decent. It's a dark film so the HDR helps tremendously
31st Jan
I loved this Godzilla Movie, shame it gets so slated, Godzilla in this looks epic compared to how it looks usually.