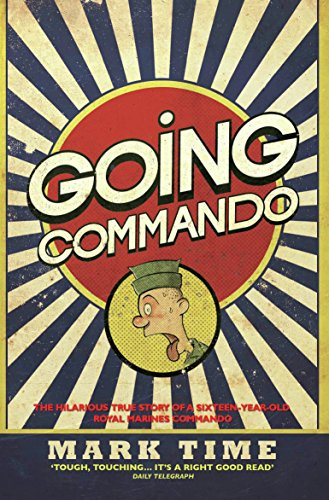 At 16, Mark Time wants to become either a geologist or a Royal Marines Commando. So which does he choose? Despite his love of basalt, he chooses the career that teaches him how to kill... and sh*t in plastic bags.Knowing his weak body will have to shape up to complete thirty weeks of commando training, Mark prepares for the Royal Marines by sleeping in his shed wearing only plastic bags. He braves pain by ordering his mate to attack him while trapped in a sleeping bag. He starves himself in a stupid urban survival exercise, turning down the offer of crispy pancakes from his bewildered mother.He is ready.Some might say for the nut house...Often hilarious and yet shockingly sobering, this is the true story of a boy who joins one of the world's most elite military units with only naivety and incompetence equalling his will to succeed.

'A cover to cover laughathon' - SOLDIER MAGAZINE
PostTweetShare Share with WhatsApp Share with Messenger
Community Updates
Amazon DealsAmazon discount code
New Comment SubscribeSave for later
2 Comments
11th Jun
Cheers, just bought and will eventually give this a read. Another one to add to my kindle pile of shame. It's getting as bad as my other piles - PS4/XBOX/PC.
11th Jun

ditto! i still have not played the witcher 3 GOTY edition or assasins creed oddysey, both of which i purchased in 2018, in addition to countless kindle books....