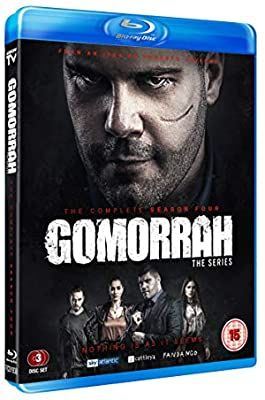 Genny is left to face a Naples once again on the brink of fighting and bloodshed. With Sangue Blu taking back his grandfather s kingdom and the Capaccio crew making their moves on the Secondigliano turf, Genny s sole remaining option is to bring in a new player: the Levante family. For a while, their involvement gives Genny a newfound balance on the map of gangland power, and as he starts to shed his old criminal past behind, he dreams of setting up a life for his son entirely different to the one his father left him.

But it s never as easy as it seems to get away from your roots. As the truce between the crime families becomes increasingly frail, Genny is about to learn why his father decided to keep the Levante family out of North Naples, and to find out just how fragile a newfound balance of power can be.

Features & details
Product information
Number of discs 3
Format PAL
Actors Salvatore Esposito, Cristiana Dell'Anna, Cristina Donadio, Ivana Lotito, Arturo Muselli
PostTweetShare Share with WhatsApp Share with Messenger
Community Updates
Amazon DealsAmazon discount code
If you click through or buy, retailers may pay hotukdeals some money, but this never affects which deals get posted. Find more info in our FAQs and About Us page.
New Comment Subscribe Save for later
7 Comments
30th Dec 2019
Great series. Just when you think it can't get any darker.....
30th Dec 2019
Stunning
30th Dec 2019
Truly amazing show. You forget your watching a sub titled show but truly this is an amazing series. Both the last two seasons final episodes have been epic.
30th Dec 2019
2nd to The Wire for me. Great show.
30th Dec 2019
I paid £27.62 for this in July so have some heat! The best box set I've ever watched - recommend you buy this and the three preceding seasons!
30th Dec 2019