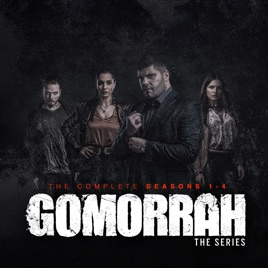 Based on an idea by Roberto Saviano, from his international best-selling book, ‘Gomorrah’ and the lm of the same name, directed by Matteo Garrone, comes an event-series from Italy focused on the fierce Neapolitan crime organisation, the Camorra. Set in the suburbs of Naples, focusing on organized crime and the relationships between gangsters, drug dealers, and ordinary people, Gomorrah depicts street-level crime and its hierarchical organization from the pavement, all the way up to regional government offices. The Savastano clan, led by the Godfather, Pietro (Fortunato Cerlino) and his loyal wife, Lady Imma (Maria Pia Calzone) reign over Naples with the assistance of his obedient and self-confident right-hand man, Ciro ‘The Immortal’ (Marco D’Amore), who must teach their only son Gennaro – the heir to the Savastano gilded throne – the brutal and bloody ways of their clan. As Gennaro transforms into, and beyond, what Ciro and Pietro could have ever wished for him to become, power struggles ensue, and the balance of power shifts back and forth with devastating consequences for all involved. As the era of the Savastano clan looks to be crumbling, Ciro and Gennaro’s fates will intertwine as they spread their criminal links beyond their homeland, encountering new illicit ways to trade in drugs and thrive on the spoils, despite both of them being all but destroyed in the process.
PostTweetShare Share with WhatsApp Share with Messenger
Community Updates
ITunes Store DealsITunes Store voucher
New Comment Subscribe Save for later
Top comments
13th Jan
Best show on TV. Makes Peaky Blinders look like a childrens programme.
13th Jan
Did you know there is a movie called The Immortal and it's about Ciro?. Haven't seen it yet myself, it was only released on 5th Dec 2019.

You might like Suburra
33 Comments
13th Jan
Fantastic show. Right up there with Sopranos and Breaking Bad.
Edited by: "FrattonPark" 13th Jan
13th Jan
Bargain, superb show
13th Jan
Best show on TV. Makes Peaky Blinders look like a childrens programme.
13th Jan
Top show, bit too realistic, City of Naples has condemned the show.
13th Jan
While I personally prefer the Blu Rays (although season 4 in UHD on Sky was nice) at this price it's a steal and if you don't have Sky Box Sets (where it is available for free) I'd go for it - my favourite box set of all time!
13th Jan
Did you know there is a movie called The Immortal and it's about Ciro?. Haven't seen it yet myself, it was only released on 5th Dec 2019.

imdb.com/tit…g_0
13th Jan
Absolutely stunning show.
13th Jan
Brilliant music too. And driving shots. The last series was shown in the cinema in Italy before being on the telly!
13th Jan
Superb show, thought season 4 was going to be a bit of a letdown but it turned out as one of best season's.

Best Mafia series ever and certainly tops Sopranos.
13th Jan
A brilliant show! One of the best.
13th Jan
Best show on TV by far.
13th Jan
Love Gomorrah, Braquo and the bridge. Any other foreign language tv shows as good as these that someone could recommend?
13th Jan

Good to know. He was a great character. Never known a series where my empathy switches so much between characters!
13th Jan
great show. Is it not o n C4OD.
13th Jan

You might like Suburra
13th Jan
As I said before, my second favourite series (after The Wire). So intense, it's unreal.
13th Jan
Didn't know there was a season 4. Watched the first three seasons on Sky Now last year. It was one of the best TV shows I've ever seen.
13th Jan
Thanks OP! Been meaning to give this show a go for a while now. Anyone know if this Apple store version has English subtitles (or audio)?
13th Jan

Just as it should be. Watching foreign TV dramas with dubbed audio should be a crime
Edited by: "chocci" 13th Jan
13th Jan
great series ... Ciro is still alive imdb.com/tit…86/
13th Jan

Amazing..any idea where I can get this?
13th Jan

Amazing..any idea where I can get this?

No clue at the mo ... probably HBO or SKY will show it at some point
13th Jan

No clue at the mo ... probably HBO or SKY will show it at some point

Looks epic.
13th Jan
Each HD series is a fiver each on either Netflix or Amazon Prime. Think it's Prime. I got S3 for 99p so I'll get the other 3 and deffo watch again.
13th Jan

Lol pls forgive me for not reading all comments 🙃
13th Jan

Thanks will check the ones I haven't already watched. BBC series tend to be a bit boring and the acting wooden.
13th Jan

Agreed. Dracula was about the first series BBC have shown in the last year that I enjoyed.

Btw, if you liked Braquo, you are going to love Spiral (engrenages)
Edited by: "chocci" 13th Jan
13th Jan
Got season 3 on prime for something like 99p last year. Waiting for similar deal on season 4. Class show
14th Jan
Season 1 is awesome. Was lucky enough to get seasons 2 and 3 for about 50p each (to keep) from Amazon (thanks to this site for pointing out price glitches!). Season 2 not as good as the first but still pretty damn decent. Looking forward to S3.