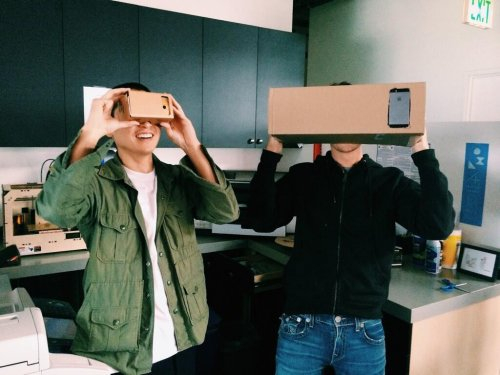 What is it?: A cheap way to turn your android phone into a VR headset. All you need to do is put your phone into the carboard enclosure and fire up the Google Cardboard App.

What can you do with it?

• Earth: Fly where your fancy takes you on Google Earth.
• Tour Guide: Visit Versailles with a local guide.
• YouTube: Watch popular YouTube videos on a massive screen.
• Exhibit: Examine cultural artifacts from every angle.
• Photo Sphere: Look around the photo spheres you've captured.
• Street Vue: Drive through Paris on a summer day.
• Windy Day: Follow the story (and the hat) in this interactive animated short from Spotlight Stories.

I've been really wanting to try one of these, and even though it's cardboard, most of the kits I've seen online are still £15-20. So this seems like a great, inexpensive way to try something new.

Virtual reality on your smartphone
We want everyone to experience virtual reality in a simple, fun, and inexpensive way. That's the goal of the Cardboard project.Virtual reality has made exciting progress over the past several years. However, developing for VR still requires expensive, specialized hardware. Thinking about how to make VR accessible to more people, a group of VR enthusiasts at Google experimented with using a smartphone to drive VR experiences.

The result is Cardboard, a no-frills enclosure that transforms a phone into a basic VR headset, and the accompanying open software toolkit that makes writing VR software as simple as building a web or mobile app.

By making it easy and inexpensive to experiment with VR, we hope to encourage developers to build the next generation of immersive digital experiences and make them available to everyone.

- Stole description from an older thread, credit to shadders139

Here is a list of the phones we've tested that are compatible with Cardboard.

Feel free to add your device to the list if you've tested it.

Only compatible with the new 4G version of the Moto G - no apps have head tracking when used with the original Moto G as it didn't have gyroscopes.
- jewelie
PostTweetShare Share with WhatsApp Share with Messenger
Community Updates
DealExtreme DealsDealExtreme voucher codes
New Comment SubscribeSave for later
356 Comments
28th Sep 2014
cardboard.withgoogle.com
28th Sep 2014
Not bad deal.
28th Sep 2014
I kinda want to vote hot on the idea but think there's a hidden camera recording me if I do.
28th Sep 2014
Post duplicated by itself for some reason.
28th Sep 2014
Bought one a while ago for over double the price, no complaints with it.
Limited apps etc so far, but it will take some time for more to come through and it's use is wider spread on youtube.
29th Sep 2014
Does it work with iPhone?
29th Sep 2014

Does it work with iPhone?

Yes. Use the bendy Iphone 6 plus for that fully immersive IMAX wraparound effect.
29th Sep 2014
Cannot find it on the AppStore unfortunately
29th Sep 2014
thanks
29th Sep 2014
You can use it to stream games from a pc too like an oculus rift using this:

I use it with a moto g lte and its great but you need to move the magnet to the front to make the button work otherwise poke your finger and touch the screen. It's early days at the mo but not a bad start. Do yourself a favour and put a bit of soft velcro where the nose bit sits and forehead to stop sweat marks, also if you want a real experience grab a scarf or similar and tie it round the googles and your head an you can use a joypad hands free.
Some apps are working with joypads, I use this one:

Does it work with iPhone?

yes works on iphone but you have to download different apps. i have found these so far that work pretty well on my 4s

hope this helps
29th Sep 2014
Never heard of before but sounds great and ordered! Many thanks!!
29th Sep 2014
love how iphone users want android products lol... don't worry it will come out when iphone 6.s.bend is released next year :-P
29th Sep 2014
Anyone bought from this site before? no reviews on site either....
29th Sep 2014
seems cool but even in the DX pics the lenses are dropping out. very tempted to get one as it's so cheap but if i could get lenses elsewere i'd try my luck with a pizza box.
29th Sep 2014

Anyone bought from this site before? no reviews on site either....

yes bought from a few times. only had 1 issue that was stock ran out but held out for 3 weeks and item arrived. apart from that they pretty good.
29th Sep 2014

Anyone bought from this site before? no reviews on site either....

Where did you get that info from??


Hello I want to by this but I am unsure

Is it SPECIFICALLY FOR Samsung NOTE

OR can you use any old android phone
29th Sep 2014
Bought this last time from dx, about 6 weeks shipping it's good for 5 minutes as a gimmick and I will probably try it again with some more apps. Hot for the price.
29th Sep 2014
Just ordered as seen a while back and always fancied trying it out

bought quite a few things from DX and never had a problem before; their support are pretty good if you need them.
29th Sep 2014

Can be used with lots of phones.
I've used it with my HTC One x
29th Sep 2014
is it just me or is the price different now. when i search for the title i get two hits - one at $5.57 and another at over $10.
I'm assuming its the NEJE one folks are referring to?

How does this work,i mean to make my iPhone 6 bend, do you need to download an app?
29th Sep 2014
There's a massive hunk of postage being added for me. Am I doing something wrong?
29th Sep 2014

Must be, it's always been free postage for me.
There should be an option to select your delivery option, looks like DHL has been added on or something.
29th Sep 2014

No idea what I'd done but I've got it with free postage now, thank you!
29th Sep 2014
I have an S4 mini. Anyone know if this is compatible? The phones listed that I know of are bigger than mine which makes me think this might be a "big phone only" type product but am really keen to try it on my "small" phone.
29th Sep 2014

This works on phones that aren't listed; however the phone I'm using that isn't listed is a HTC One X, so you might be right about the big phones.
29th Sep 2014

If you don't have enough storage space it also works with 'Trousers 2.1'

Make sure you unzip it first