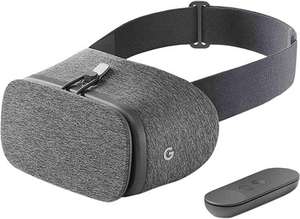 Google has officially stop supporting Google Daydream, so the lifetime of this product is maybe limited, but for what you get it's an absolute bargain.

You get the Google Daydream headset, which is a Virtual Reality headset that you pop your phone into to provide the screen. Officially only a limited number of phones are recommended, but many others will work also.
You also get the Google Daydream controller, which is what makes this a bargain. It's a full 3d wand controller, ie it tracks the movement of your hand. It also has as scroll pad and three main buttons, plus two volume buttons. This makes the experience of Google Daydream a million times better than Google Cardboard. When you are inside the headset, you can move between apps and control them using the point and click controller. You can also play games like Disc League. Persoonally I use mine mainly for looking at Panoramic and 360degree photos using the Gizmo VR app.

Your phone must absolutely have a set of movement sensors, ie Gyroscope, this is to track your head movement. It also helps if your phone has a semi-decent screen, eg Full HD.

Officially Daydream is not supported on Android 11 onwards, but it works perfectly fine on my Android 11 Pixel 3.

CEX is a second hand retailer and many branches seem to have these in stock in different conditions. The Daydream View 2 headset has the extra "augmented reality" hole. Online Delivery is only £1.95. You can also get similar prices in some Cashconverters, although their prices vary wildly between branches.
PostTweetShare Share with WhatsApp Share with Messenger
Community Updates
10 Comments
Post a comment