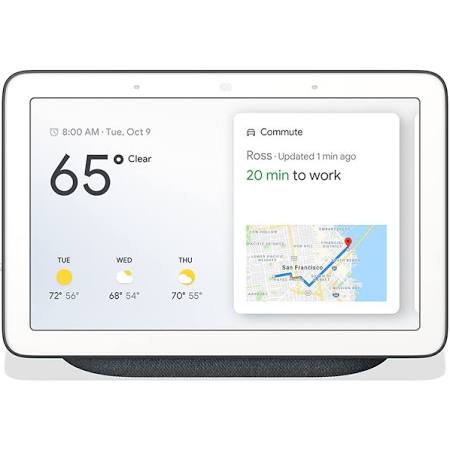 Additionally you will also be available to save £50 on the Nest Protect 3-pack and £40 on the Nest Cam Outdoor (there was no room in the OP for these). There are a few more offers too on various other smart products 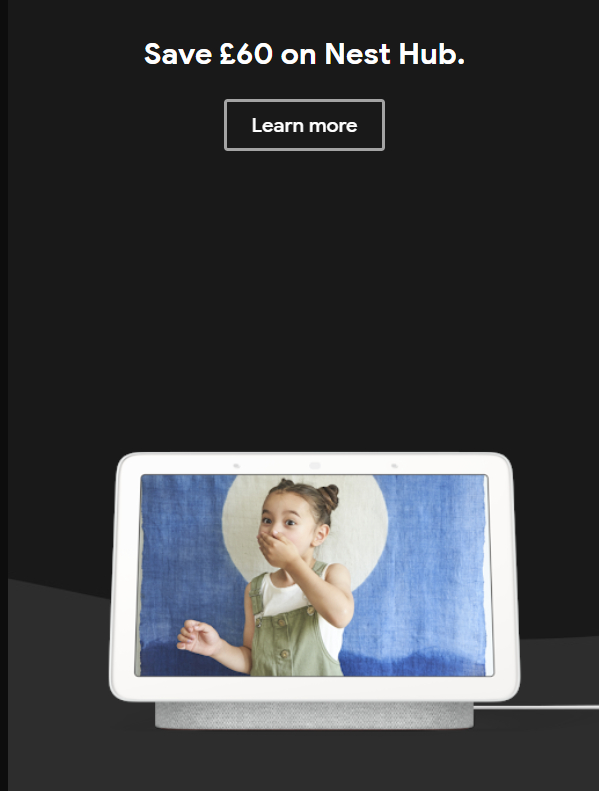 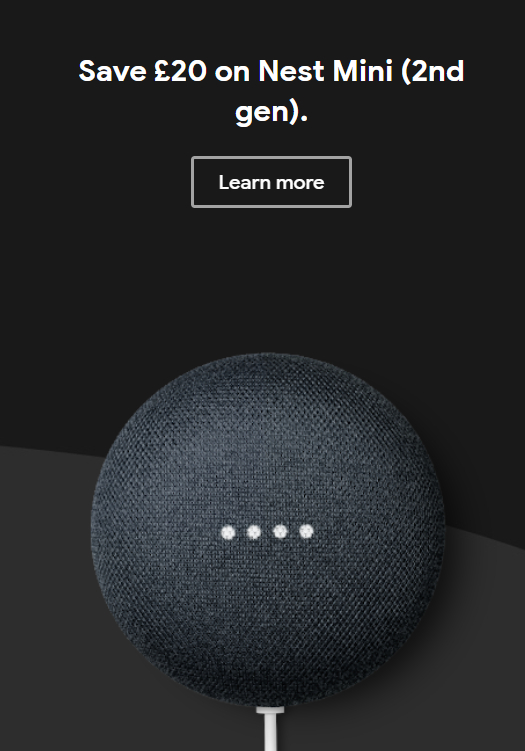 You can subscribe to Google One and get 3% back on the £2.49 plan or 10% back on the £7.99 plan. Just remember that this credit will be added 30 days after purchase, so you may end up paying for two months of Google One

As an example if you buy the Google Nest Hub for £59, on the £7.99 plan with 10% back you'll get £5.90 back in credit. This is worth it for someone who wants Google One and the item being purchased anyway. However, for larger purchases there is profit to be made (such as Pixel Slate £449, 10% = £44.90 back which justifies the £7.99 Google One subscription. Two payments of £7.99 will mean a profit of £28.92 on this purchase in the form of credit). Google One can be paid for using Google Play credit including any you've stacked up from Google Opinion Rewards

Remember to cancel your subscription from renewing when you receive the credit!

Find out more about Google One
Google Store DealsGoogle Store voucher codes
If you click through or buy, retailers may pay hotukdeals some money, but this never affects which deals get posted. Find more info in our FAQs and About Us page.
New Comment Subscribe Save for later
Top comments
18th Nov 2019

That's actually quite a big and personal question to answer. The truth is you need to think ahead a bit with what you need and decide from there. I tried to keep things generic for a while and invest in agnostic products like Philips Hue to see if there was going to be a winner. I have the original Echo and Google home, and decided to wait it out a bit until recently, and I've decided to go with Google now.

Here are the main differences:

Audio stuff: Amazon. Generally I think Amazon stuff is better. I am a prime customer so this opens up a lot more music from the get go without having to get another subscription. However both work with Spotify if you want to remain in the middle. I think their low end speakers the dots/minis are pretty much the same in terms of quality, although I prefer the look of the Amazon dots. Also Amazon have an alarm clock version of the dot which is lovely looking.
Voice assistant: Google. It's just smarter and gives better answers, if you ask something not obvious, it will read out 'results from the web'. Google of course have been organising the web for decades now, wheres Alexa doesn't really know. This is not just basic searches and generic questions, but things like when does the post office close? Google will assume you mean the one closest to your house and tell you. Alexa won't give you the answer. Also with an Android phone Google is there, Alexa isn't. Same with in car assistants (Android Auto).
Doorbells: Google. Ring owned by Amazon have more experience here, and probably should win because you are going to get more deliveries at your door from Amazon than Google. They also have battery options if you can't figure out how to drill a hole and feed a wire through your door frame. With that in mind, Google make one doorbell, and it smashes all the Ring cameras in terms of quality and a killer feature: Facial recognition. This comes form Google's AI developed across their phones. So Amazon are going to have a hard time matching that level of data.
Video assistants: Google. The new products, Amazon show or Google home hubs. Generally equal, although Google owning youtube gives a massive advantage here. For a while the Amazon stuff didn't work with youtube, making them virtually pointless, however they now do. The main thing here that put me off, is the Amazon ones have constant text at the bottom saying what Alexa can do. This looks really annoying, and was one of the kickers for me to decide on Google over Amazon, despite being a relatively small thing. Also Google AI kicks in here. Facial recognition on the max hub means if you walk up to it, it will show you your calendar, and things you want. If your partner walks up to it, it will show them their calendar and preferred layout. Also worth noting here you likely use Google as a calendar. Amazon don't really have a calendar app. They do a shopping list though.
Outside Security: Amazon. Although the nest IQ cameras are probably the best, they are way more expensive. I really like the Ring spotlight too, integrating floodlights with a camera is great, Google doesn't have a competitive product to this yet.
Alarms: Equal. Ring and nest have alarms out now. I think the nest one isn't out in the UK yet. Both are quite bad looking things with keypads, etc. Not enough to sway me either way.
TV: Amazon. Amazon have great TV offerings. They can also display your ring front door thing on it when someone rings it. Prime members get a lot out of it. Google in comparison just has paid for movies (same as Apple/Rakuten). But they do also own youtube, which is where a lot of people get their information and entertainment from too.
Other stuff: Google. Nest protect smoke alarms and thermostats integrate well and offer more. Ring doesn't offer a competitor to them. I don't think ring will do a thermostat, it's competitive now, and it's not really what they are about (they are more about security, whereas nest is more about the whole home). However I can foresee Ring doing a smoke alarm in the future. It makes sense in their lineup and falls under security. It would be nice if the nest smoke alarms doubled as a doorbell chime as you fit them on all floors, but they seemed to miss that trick.

Hope that helps anyway. On the balance of things above I've decided to put my eggs in Googles basket. But I'm still keeping my Amazon echo for music. Apple stuff is in a distant third place. They aren't going to be making outdoor cameras and doorbells anytime soon, and are way behind in voice assistance too, although their one speaker offering is good, it's expensive.
Edited by: "rob85" 18th Nov 2019
18th Nov 2019
Glad I flogged my free Home Mini for £25 a couple of weeks ago.
18th Nov 2019
19 quid for the original home mini seems pretty good
18th Nov 2019
Someone's getting some 🔥 from me

You might want to see this and edit the post to showcase the other deals. Source: Official Google Store website
Edited by: "andrewworrall1" 18th Nov 2019
280 Comments
18th Nov 2019
Someone's getting some 🔥 from me

Watch out, as the Mini currently on offer is the first gen rather than the second.
18th Nov 2019

Well spotted. I have a few anyways. Won't be upgrading for a hole and slightly better sound
18th Nov 2019
Do the Google Nest Thermostat E for £150 and the Google Pixel Slate (with keyboard) for £450 seem like good deals?
18th Nov 2019

It’s brilliant but Wi-Fi setup was a bit of pain until I got a bit whole home mesh extender 3 pack. Put a dish near it and so much better, the Wi-Fi in it is very weak.
18th Nov 2019
Just be aware that there is extra work and possible wiring necessary for the Nest Hello, depending on how you want to set it up.

If you want it connected to the doorbell you need to get a transformer. There are videos online on how to set it up.

The quickest way for us was to buy a single unit adapter from amazon and connect that up to the mains. We use our phone or Home Mini as the door bell
18th Nov 2019
how do these compare with amazons version, is it like a brower where you can play music and view videos?
Looking to get one for my kid for xmas if any good.
18th Nov 2019
Dose anyone know if this can connect via personal hotspot on mobile phones?? I know the min can’t TIA
18th Nov 2019
In previous years, have other retailers ended up matching these deals?

Not always. Checked and my house (new build) needs no changes. Just fit doorbell and chime will work
18th Nov 2019

English?
18th Nov 2019
Also worth noting that when these deals are live you can go get price match a certain retailers including Curry's PC World.
18th Nov 2019
My house has no chime so will have to buy the adapter. Issue is wiring it to the upvc door frame!
18th Nov 2019

JL will likely
18th Nov 2019
Any of Google's smart products have a Hue bridge built in?
Edited by: "Vanderlust" 18th Nov 2019
18th Nov 2019
Good timing as I was contemplating getting the Lenovo alarm clock but will grab one of these since they offer Google voice recognition.
18th Nov 2019

I've got the new version and no issues so far. Gutted it will be discounted a bit, but hoping they also discount the 'points' so that I can replace from 'minis' with them to fully mesh my house.
18th Nov 2019
What better google home assistant or nest hub?
18th Nov 2019
i have 2 x google nest hubs, and a lenovo google smart clock,and only a one bedroom flat,im def changing my name to saddo,but love them all.
18th Nov 2019
I'm probably being a complete div (highly likely), but I can't see where/how to get the Home Mini for £19
18th Nov 2019

Any of Google's smart products have a Hue bridge built in?

What's a nest mini do? It looks like a home mini.. I'm confused

Re-branded with a hole in the back and better speakers

Ah shame. So many bloody things to plug in or charge these days. Think it's time companies started consolidating a lot of tech.