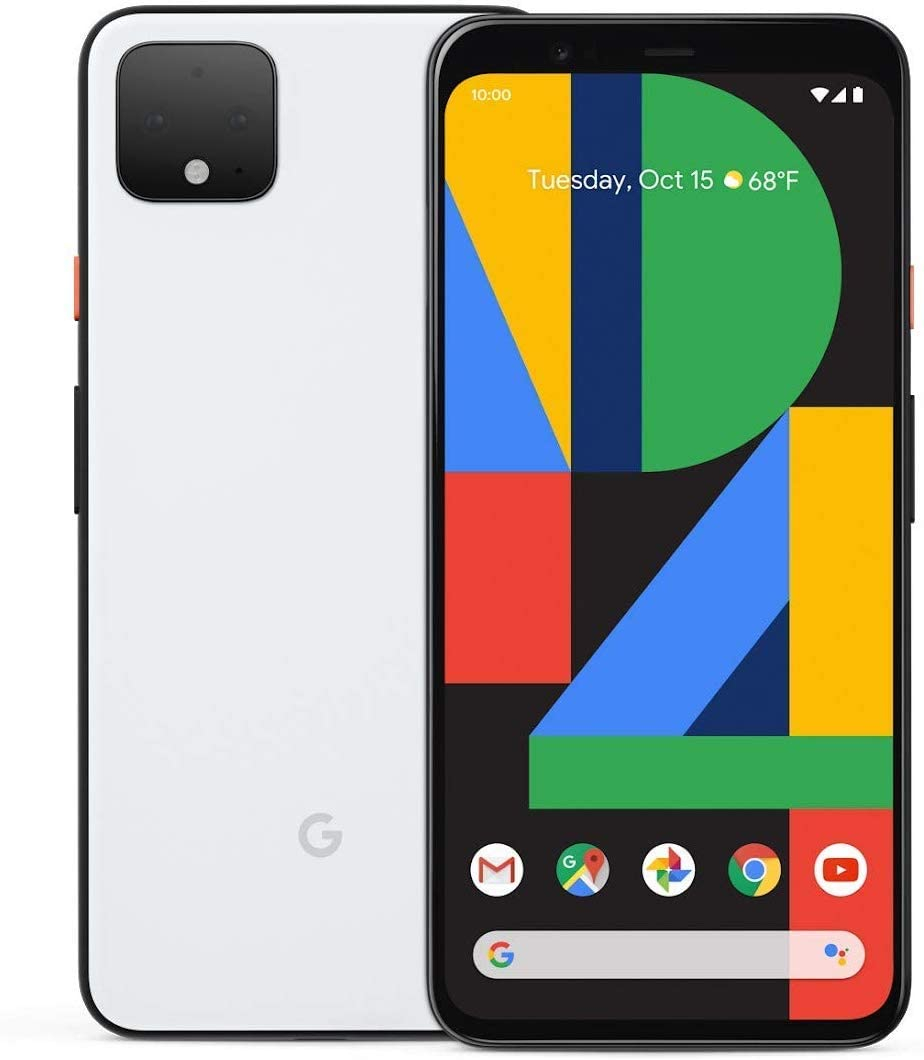 OOS, but you can still order for the aforementioned price and it will ship when Amazon receive stock
PostTweetShare Share with WhatsApp Share with Messenger
Community Updates
Community support
16th Apr
Product description - The Google Pixel 4
Exclusive functions such as the innovative gesture control Motion Sense, an intelligent camera and the latest security functions make it one of the best smartphones on the market. The rear cameras capture details and colors perfectly even in low light, even without flash and tripod. If night vision mode is activated, you can now even take photos of the Milky Way with the Pixel 4 - just tap once and the starry sky is captured. It is one of the best low-light cameras in the galaxy - without any professional equipment. Thanks to the two lenses, you can take even better pictures in portrait mode. The background looks artistically blurry, which brings the foreground even more into focus - the result is professional images like with an SLR camera. Regardless of whether you sweat on the treadmill or enjoy a delicious burger - thanks to radar-based gesture recognition, the Pixel 4 can be operated with movements without contact. Thanks to the tailor-made Titan M security chip, sensitive data is optimally protected.

Amazon Germany DealsAmazon Germany voucher codes
New Comment Subscribe Save for later
25 Comments
16th Apr
Yikes that price dropped rapidly, not surprised with how underwhelming the phone is
16th Apr
Will this come with an EU plug?
16th Apr

Will this come with an EU plug?

It's your comment that's underwhelming, if you allow me to say so, and not Pixel 4. If you get your hands on one, you'd rapidly change your mind I'm sure
16th Apr
4a due out any moment I think, might push prices even lower
16th Apr
What was Google thinking when they put a motorcycle battery in a tesla
16th Apr

4a due out any moment I think, might push prices even lower

Yeah, that's my "next" phone, however, I've heard that there's a delay on production unfortunately.
16th Apr

Its still a fact though that the price has dropped massively. A blockbuster phone doesnt go from 669 pounds to 420 within 6-7 months

Based on 3a doing well, i think google will probably have better hopes from the 4a
16th Apr
We have both a pixel 3 and 3a and I don't see a great difference between them, other than the significantly increased battery life on the 3a.

Given the choice I'd buy the much cheaper 3a anytime.

Perhaps that'll be the same for the 4 and why prices are dropping on the 4?
Edited by: "Bash_er" 16th Apr
16th Apr
Good price! I think the Pixel 5 with the 765G at lower price point seems interesting - upper mid range is Googles next play from what Ive read. Although they are building a custom SoC for their phones and Chromebooks so, whatever phone that ends up in (6 or beyond), could be the one to watch out for. Heat added
16th Apr

It was overpriced at launch, a sport in which the premium brands like to indulge. Yes, I remind you guys that similar premium products by other leading brands, for example Huawei Mate 10 Pro back in late 2017, was priced at the princely sum of £699. So it's not Google alone who make that mistake.

But tech is relentless, so definitely there's gonna be a price drop after 6 months (because upgrade normally coming in October), even if phone is a blockbuster, obviously demand has an effect on price too and the relentless campaign waged in some media/social platforms (including HUKD) against Pixel 4 managed to depress demand, pushing price down.

80% of folks wouldn't feel much difference in daily use between a good mid-range phone and a flagship.
Edited by: "xavierluther" 16th Apr
16th Apr

The 3a has an SD670 in it, the 3 has a SD845 there should be a substantial difference in performance between the two.
Unless that bit rot thing has set in on the 3.
The synthetics show the 670 to be just below SD820 level.
16th Apr

Well the fact is there isn't in real life usage.

Of course if you were to absolutely hammer the 3a it would come up a bit short compared to the 3 but that simply isn't the point and the case for most people.

If they were the same price I'd get the 3, although even the significantly better battery life might even persuade me to get the 3a anyway.
16th Apr
Can I use my amazon gift card ( purchased in UK) for items from amazon Germany?
16th Apr
Gebraucht means used.
16th Apr

Real life usage or your usage?
Play a game of Shadowgun Legends and experience the real world usage on that.
Bit rot must have set in on your Pixel 3 for it to be that slow, as even the MTek G90T Redmi is noticibly faster than the Pixel 3A.

Looking at that emmc 5.1 and other ommision on the 3A, I would take the extra performance and specs, then drop the phone on the charge for 15 mins to make up for the 100mah difference and the inferior SOC power demand.
Edited by: "realdeals" 16th Apr
16th Apr

The battery life would die before i even finish typing a comment on it XD, and that dated looking forehead with their joke of soli gestures that they've done nothing with, still lacks 4k60 and the 90hz is disabled below certain brightness, i'll stick with my Mi 9T Pro for £280 with double the storage
16th Apr

OTT, many of us have wireless chargers/stands nowadays, at home & work. Stick to whatever you want, you don't know Pixel 4.

Ignorance can be a bliss, certainly for your wallet. Pixel 4 doesn't do corner-cutting, yet you could get it here recently on a JL deal with cashback, such great value, nearly for what you paid for your current, inferior phone

Nevermind, this is a free country, enjoy your purchase.
Edited by: "xavierluther" 16th Apr
16th Apr

This is my point entirely. You talk as if everyone plays high end games on their phones, well they simply don't.

As I said, I have both these phones and notice negligible difference between them. Of course if I played power hungry games then I might notice more, but that is what a PlayStation is for.

I like many, many people (almost certainly the vast majority) only use their phones to surf the web, check email, do a bit of social media, watch the odd video, listen to music and take photos. For this use, there is little difference between the 3 and the 3a fact.
16th Apr

Same here, I went from a 3xl to a 3axl.. Battery life is at least double on the 3a xl and it does everything I need it to
17th Apr

So you defend poor battery by just saying "just charge it lol", yeah what a great excuse, charge the phone even more which uses more of its charge cycles and within 2 years that battery is horrifically poor

And it does do corner cutting, it lacks a FP, it lacks a ultrawide, it lacks a 128gb base, it lacks a headphone jack, it's design looks dated to me and the phone's only advantage being photograpghy is easily matched by any other phone if you install gcam with a simple APK install,

The pixel 4 is a pathetic joke of a "flagship" and that's why its gotten these massive price drops, its hot garbage compared to what other brands released for 855 flagships in the name of muh stock android,
17th Apr

Again, don't have time to help you with your ignorance, sorry, just do your homework and find out why Pixel 4 is one of best phones in market.

'It lacks a FP'. Well yes, Google replaced it by the best face rec in the market, helped by radar, the envy of Apple. Etc...

(That said, I love to have my PHYSICAL fps, as I own several phones with the more modern on-screen tech, which is sometimes unreliable - yes, even you Huawei Mate 20P, ZTE Axon 10P or Nokia 9. Luckily BT-paired devices or Google's smart lock often come to the rescue)

It's just pathetic to claim that installing GCam apk on whatever phone magically sorts out your camera, making up for all its shortcomings. Reality is more complicated.

It'd be nice if you grab a Pixel 4 in a store and start getting to know it, probably your prejudices would be dispelled and reality shine through, but you seem to me too hardened against Pixel: media campaign distorted your preconceptions, putting you off an objective judgement. You lost your open mind.

No offense intended, again it's impossible that everyone loves Pixel, or iPhone, or Samsung, even Xiaomi has a limited number of fans. Such is life.
Edited by: "xavierluther" 17th Apr
18th Apr
I love my 3 and 4 XL. I guess some will want the headphone jack but I’d rather take better specs and neural core and waterproofing.
20th Apr
Better than an iPhone..
24th Apr

Better than an iPhone..