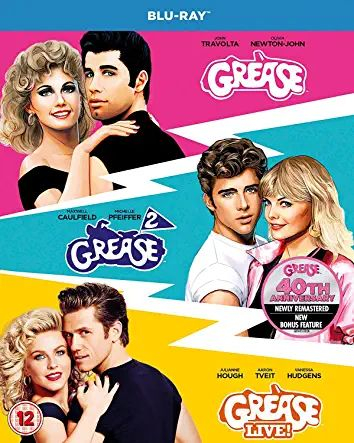 Product Description
Double bill of musical romantic comedies plus the 2016 live stage adaptation. In 'Grease' (1978), after their summer romance ends, Danny (John Travolta) and Sandy (Olivia Newton-John) are unexpectedly reunited at high school when the latter moves to Danny's town. However, their relationship stalls when it becomes apparent that Sandy is not 'cool' enough to date gang leader Danny. Hit songs include 'You're the One That I Want' and 'Greased Lightning'. In 'Grease 2' (1982) Stephanie Zinone (Michelle Pfeiffer) is the bad girl who catches the attention of English exchange student Michael Carrington (Maxwell Caulfield), who eventually wins her heart with the right moves and the right set of wheels. In the musical adaptation of the 1971 film 'Grease Live!' (2016), Aaron Tveit and Julianne Hough play the roles of Danny and Sandy. With their relationship stalling, Sandy is befriended by girl clique the Pink Ladies, headed by the meddling Rizzo (Vanessa Hudgens), who is also vying for Danny's affections. The cast also includes Carly Rae Jepsen and Didi Conn, the original Frenchie.

There ain't much more I can tell you as everything is in the product description. ‌ ‌
10th Jan
Good price if you've missed it before. Hot.
10th Jan
Great price, not sure why it's being voted cold!
10th Jan

Great price, not sure why it's being voted cold!

Neither do i.i posted two deals,this and Preacher season 2 at good prices and instantly somebody voted cold in both of them and people have just followed suit.the main thing is that there are people seeing it and some will order to get a deal.that'll be job done
10th Jan

I'm really sorry that's happening to you. Hopefully people will wise up and stop being so petty.