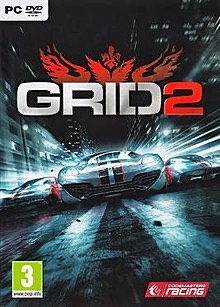 GRID 2 for PC at Instant Gaming for 91p

Be fast, be first and be famous as the race returns in GRID 2, the sequel to the BAFTA-award winning, multi-million selling Race Driver: GRID. Experience aggressive racing against advanced AI and become immersed in the race with GRID 2’s new TrueFeel™ Handling system which powers edge of control exhilaration behind the wheel of every iconic car. The next generation of the EGO Game Technology Platform delivers genre-defining visuals and jaw-dropping damage as you prove yourself across three continents in a new, evolving world of motorsport. Earn fame, fans and fortune as you blaze your way to the top in intense, relentless races on licensed circuits, beautifully realised city streets and lethal mountain roads. GRID 2 will also set the new standard for multiplayer racing with innovative modes, an entirely separate progression system and deep integration with RaceNet, the free online extension for Codemasters Racing games.
key Features:
The race comes alive with GRID 2’s TrueFeel™ Handling system for edge-of-control exhilaration
Prove yourself against advanced AI in aggressive, blockbuster races packed with wow moments
Blaze your way to the top of a new world of motorsport
An extensive and separate online campaign redefines multiplayer racing games plus full RaceNet integration
Powered by Codemasters’ EGO Game Technology Platform for jaw-dropping damage and stunning visuals, GRID 2 sets the standard for technical excellent in racing.
Race a handpicked selection of iconic cars that represent the best in automotive engineering from the last 40 years
Take on challenging licensed tracks, stunningly realised city streets and lethal mountain roads
Prove yourself by entering and winning events across three continents
Race Immersion Technology immerses you in the race like never before
The long-awaited sequel to the BAFTA-winning, multi-million selling Race Driver: GRID
There are currently 221 players playing this game on Steam
Release date

Thank you worth a try for that price.

Definitely hope you enjoy
5th Apr
Recommend this over the new one
5th Apr
Does it have demolition derby races like grid 1? Anyone know how it is with a wheel? Cheers
5th Apr

It does have Demolition Derby races, yes.

Can't answer you about the wheel but I do love GRID 2, it's still one of my favourite go-to racers.

If you fancy getting a group together to play Demolition Derby mode, please say? I'm rubbish at it, but I love it - it's about the only online multiplayer game I ever play but sadly there's rarely anyone playing now.

Julie
x
5th Apr
Works great with a wheel. This is also the best racing game I have played!
5th Apr
Just looked yesterday at sale on origin and it was £29.99 on sale! Worth it at this price so heat added.
5th Apr

29.99!? really, this is a good deal then haha
6th Apr
Purchased.
I got three keys, one for Grid 2, and one key for each of the two Racetrack packs.
Sadly only the first one worked. The other two appeared to have been already activated by other users on Steam (that's the message received).
I contacted the seller (instant-gaming.com) for support, and they asked me to contact Steam, find when the two keys were actually activated, send by screenshot that info to them and they would then act on it.
Needless to say, this is not acceptable, Steam support is hard to access to begin with, and I don't see how this is my problem and suddenly I need to go over this. They refused to refund on account of me failing to undergo all this.
So caveat emptor.
6th Apr

Sorry to hear that mate, that’s not acceptable at all, how can they give someone a steam key that’s already been activated! terrible! hope you get it sorted..
7th Apr

Nice, will have to get it.