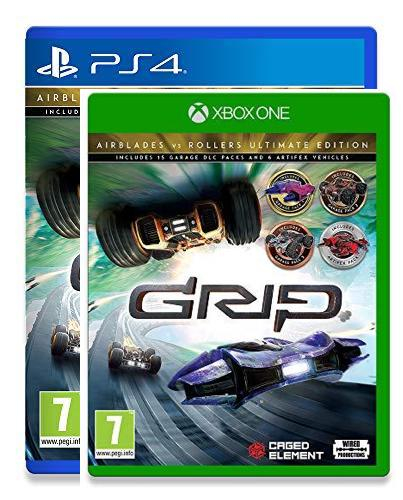 Link for PS4 Version. Current next best price I can find available is Game - £19.99 delivered.

Release Date: 05/11/2019
GRIP is a new IP for a new generation. Having launched in late 2018, GRIP went on to to impress gamers with its gravity defying driving and chaotic gameplay.

A return to the hardcore combat scene of the 90’s, bristling with heavy weapons and packing ferocious speed, the game is an intense, sensory feast. With a solid community and player numbers continually growing, GRIP has seen a huge amount of content and updates since launch, with constant optimisation, new tracks, new cars and new playing modes having already been introduced.
In early 2019 the team gave players AirBlades, a game changer introduced to wipeout the competition. Bringing in a whole new vehicle class, and uniting two racing genres from a previous gaming era for the first time. Anti-grav racers called ‘AirBlades’, powered by an Element 115 anti-gravity engine, fight against the aggressive wheel based mechanical monsters called Rollers that launched with GRIP. With both classes able to flip on any side and choose their own path, these vehicles are not defined by the laws of gravity.
This Ultimate Edition packs in a year’s worth of content all on one disc, while also bringing a physical xbox release for the first time!

Celebrate GRIP with the Rollers vs AirBlades Ultimate Edition, loaded with a year’s worth of content on the disc!
In the future, deadly combat racing has left earth to expand onto various exotic and hostile planets.
Heavily armoured vehicles called Rollers battle it out with deadly anti-grav racers called AirBlades, hitting breakneck Mach 1 speeds across tracks with twisting roads, turbulent terrain, sickening bends and adrenalin-fuelled loops.
This is full on gravity defying combat racing. Fight on 32 tracks spread across alien planets, or take your grudge to the arenas with team death match to find the ultimate champion. Wipeout the competition as you unload metal-melting weapons in one of 42 different vehicles, and exploit a destructible environment to ensure not only victory, but the complete annihilation of your opponents.
This isn’t just racing, this is GRIP: Combat Racing.


Ultimate Edition includes
PostTweetShare Share with WhatsApp Share with Messenger
Community Updates
Base.com DealsBase.com discount code
New Comment Subscribe Save for later
3 Comments
13th Apr
WipEout vs Rollcage.
Edited by: "QuickNick" 13th Apr
13th Apr
Looks and plays like a Unity game. Worth a tenner I guess.
14th Apr
The game is alright, they did a good job but then ruined it by making the game FASTER in later tiers where one little bump will send you flying out of control and lose the race.

Had fun but after a week I felt like I had my fill.

DLC is just vehicle skins, the DeLorean is not included.