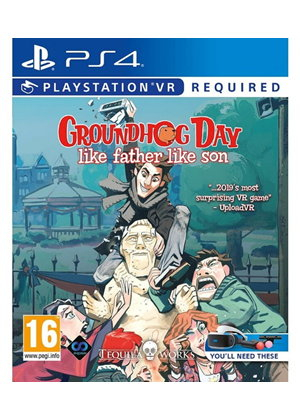 In Groundhog Day: Like Father, Like Son, you play as the charming but arrogant Phil Connors Jr., who grew up in the shadow of his father — a man who spent a lifetime repeating a single day until he had made it perfect. But for Phil Jr., today is the worst day of his life. He's trapped back home in Punxsutawney, the small town he thought he'd escaped, where he can't even get a decent cappuccino — and he's going to have to repeat the day over and over, until he learns the true value of friends and family.

This is the best deal I've seen for this game ever.

I've never seen it at this price.
17th Jan

Nah your good its not been posted good price as well
Edited by: "gemvis" 17th Jan
17th Jan

It was a poorly executed Groundhog Day joke. Sorry!

It's an interesting choice. UploadVRs review summary was as follows=

Some minigames feel forced
Unnecessary foul mouth
8.5/10
17th Jan
Surely this game will get boring quickly, you'll just keep doing the same things over and over and over....
17th Jan

Doing the same things over and over...sounds like a lot of games. I spent years on WoW doing just that.
17th Jan
Nice spot, I was genuinely going to buy this digitally for this weekend but will hold off for this price - especially for physical.
17th Jan

Been posted before...
17th Jan

Been posted before...
18th Jan

Been posted before...
Edited by: "rivellangel" 18th Jan
18th Jan