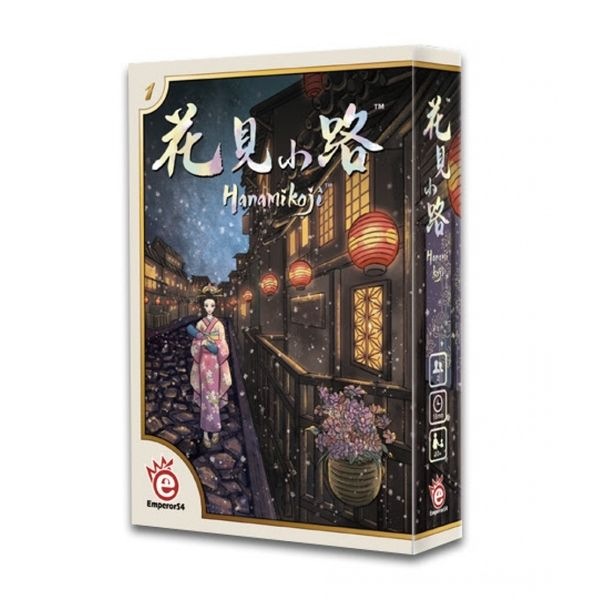 Edit: as noted by @Otimosnegocios ,the german language version can be had from amazon for 11.26 with prime delivery. Language independent game so only rules and box would be affected.

Been recommended this as a decent 2 player game. Think it's one I'll pick up as love the theme and styling. NBP is Shop4world. 7.6on BGG


Welcome to the most well-known geisha street in the old capital, Hanamikoji. Geisha — the graceful women elegantly mastering in art, music, dance, and a variety of artistic performances after years of training — are greatly respected and adored. Geisha may be translated to "artist" and they dance, sing and entertain everyone.

In Hanamikoji, two players compete to earn the favors of the seven geisha masters by collecting the performance items with which they excel. With careful speculation and sometimes a few bold moves, you may earn the essential items by giving away the less critical ones. Can you outsmart your opponent and win the most favors of the geisha?

2 Players
15 Minutes
Age 10+
PostTweetShare Share with WhatsApp Share with Messenger
Community Updates
365games.co.uk Deals365games.co.uk promo code
New Comment Subscribe Save for later
15 Comments
8th Jan
Like the sound of this game
8th Jan
Its a good find. But the german version of this game is only 11 pounds on Amazon UK (game is language independent)
8th Jan

Someone just mentioned it was good on FB. Quite tactical
9th Jan

Someone just mentioned it was good on FB. Quite tactical

I'll have to give it a look, thanks Jay
9th Jan
This game is so good. It's a series of tough decisions. Type of game you play over and over.
9th Jan

It looks fantastic but might be a bit too much for my 8 year old. I'll still probably pick it up though
9th Jan

I think an 8 year old could still enjoy it although you might need to a) make a cheat sheet clearly showing the different options they have on their turn as the symbols on the tokens provided aren't particularly intuitive and b) intentionally make some sub-optimal plays yourself so they have a chance of winning.

Definitely better choices out there for younger players though.
9th Jan

I've ordered it anyway and will see how we get on, thanks for the tips though.
His current favourite is Jaipur.
Might be able to tempt wife into playing Hanamikoji though as well. Who doesn't want to gain the favour of geisha
Edited by: "jayhutton10" 9th Jan
9th Jan

Someone just mentioned it was good on FB. Quite tactical

Which FB group is that please, Jay - "Board Game Exchange..." 27k members..? I don't use FB much but I don't find BGG's marketplace very good for me.
9th Jan

I've managed to restrain myself so far...
9th Jan

I was planning to teach my 8 year old how to play anyway so I'll let you know how I get on. I see you've purchased anyway excellent choice 😁
9th Jan

Thanks, the more I look at it the more I know I'm going to enjoy this one
14th Jan
Ok, so I bought the German version for £11 from Amazon. Absolutely fantastic. We love it. My 10 year old who's pretty smart beat me in the first couple of games! (Got him back in 7 Wonders - just!)

The mechanics are excellent. Simply take one of four actions (in turns) at a time until you've taken all four actions. But what order you take these turns and more importantly what you keep or offer your opponent is agonisingly difficult. Endless replayability. I think this will be a favourite game in our house for quite some time
14th Jan

I also bought the german version and my experience is pretty much exactly the same.
Glad you are enjoying it