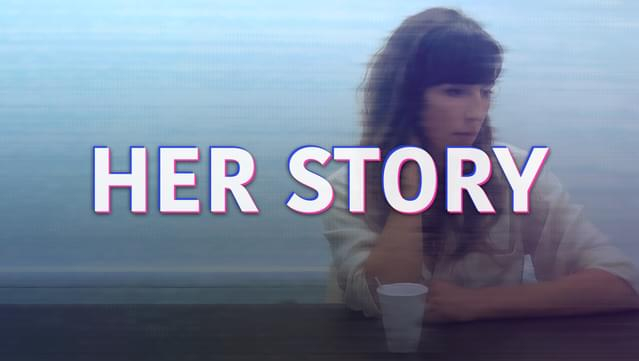 Not played this myself, but have heard great things from people who are into this sort of thing.


A Video Game About a Woman Talking to the Police

Her Story is the new video game from Sam Barlow, creator of Silent Hill: Shattered Memories and Aisle. A crime fiction game with non-linear storytelling, Her Story revolves around a police database full of live action video footage. It stars Viva Seifert, actress and one half of the band Joe Gideon and the Shark. How does it work? Her Story sits you in front of a mothballed desktop computer that’s logged into a police database of video footage. The footage covers seven interviews from 1994 in which a British woman is interviewed about her missing husband. Explore the database by typing search terms, watch the clips where she speaks those words and piece together her story. Unlike anything you've played before, Her Story is an involving and moving experience. A game that asks you to listen.
PostTweetShare Share with WhatsApp Share with Messenger
Community Updates
GOG.com Deals
New Comment Subscribe Save for later
7 Comments
10th Jan
@Illusionary currently has this game up for grabs in his weekly game codes giveaway which you can enter to win

Heat for the price though OP!
10th Jan
Not much game here but it's an interesting story. Certainly worth the price.
10th Jan

Think of it more as interactive fiction.
10th Jan
It had me gripped at the time, and has really stuck with me as a fond, unique gaming experience since.

I played it on iPad during a holiday abroad and the Mrs was not pleased I'd used her crosswords as the only paper I had to write down notes, search terms and possible theories like a TV detective.
10th Jan

This comment is bad and you should feel bad.
10th Jan

Never sat poolside enjoying a game, or book or any other entertainment with a gadget of choice? Keep using this site and you can save enough to get on the flying caravan instead.
10th Jan