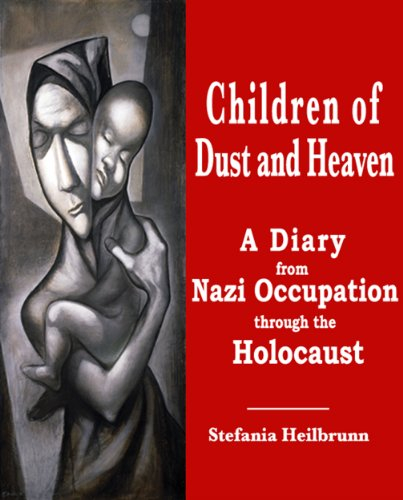 HIstory Non Fiction - Children of Dust and Heaven : A Diary from Nazi Occupation through the Holocaust Kindle Edition - Free @ Amazon

Scores Average 4.5/5 Paperback is £14.07.
Stefania Heilbrunn, born in Radomsko Poland and now living in South Africa, is a Holocaust survivor who wrote "Children Of Dust and Heaven: A Diary from Nazi Occupation Through the Holocaust". At the end of World War Two, when the author, as a young teen was searching the ruins of her town for other survivors, thrust upon her was a partial diary of a young girl, written by a teenager named Miriam, who died during the war. This teenager's diary propelled the author to research and tell this riveting collective memoir. Stefania Heilbrunn gives a vivid account of how the Nazis occupied her hometown in Europe and ruthlessly, systematically captured, tormented and killed almost all 14,000 Jews, living in her town with a total population of 30,000. Starting with Hitler's orders and the Nazi Occupation, the author details the travesties beginning with the over-crowding of the ghetto, the countless beatings and ruthless killings. She describes the heroic acts of those who fought back to survive, as the Nazis ordered mass deportations to the concentration camps, work camps and death camps, slaughtering thousands upon thousands. Heilbrunn describes the day to day banalities of evil, as well as the courageous acts of bravery and miracles that enabled survival to just a few hundred Jews of her town. Stefania wants her book to bear constant witness, and promote constant vigilance. She states, "the young must know their past, in order to be ready and able to defend their future."

This book is written by a Holocaust survivor and is based on her own harrowing experiences, as well as the diary of a young girl. The author interviewed hundreds of the residents of her town after the war and put together this powerful, historic vivid account of how the Nazis occupied her hometown in Poland and systematically tormented and killed so many Jews.

Starting with Hitler's orders and the Nazi Occupation, the author describes how day to day life changed for everyone around her. Simple routines and joys taken away day by day, but the struggle to survive was strong. From the overcrowding of the ghetto, to lack of food and water to the deportations to concentration camps, work camps and death camps of the Holocaust, the author details it all.

PostTweetShare Share with WhatsApp Share with Messenger
Community Updates
Amazon DealsAmazon discount code
New Comment Subscribe Save for later
12 Comments
28th Jan
Yet again my meaty fingers hit the - instead of the + .....sorry Boz and thanks for another great read
28th Jan

Don't worry, I give heat 🔥
28th Jan
Thanks Boz..
29th Jan
Thanks Boz. Very timely given its 75 years since the liberation of Auschwitz. Heat added. One book I will actually read and no doubt tell others to do so also.
29th Jan
Thanks Boz.
29th Jan
Having read/studied the Holocaust a lot when younger, especially having great grandparents and other family cast into that ghastly furnace, I couldn't read another book on the subject.

What doesn't kill you makes you stronger; so many from war and awful tragedy demonstrate how trite and facile a phrase that really is, nevermind someone having studied it.

After many years, I'll dip my feet back in with this.
29th Jan
So sad to think of what happened. Thanks for posting op.
29th Jan

So sad to think of what happened. Thanks for posting op.

Yes unbelievable cruelty. I just read the actress Ingrid Pitt's book which touches partially on her time in a concentration camp. It's very difficult to understand how anyone could inflict such atrocities. 😞
Edited by: "Boz" 29th Jan
29th Jan
I watched "Children of Windemere " on BBC2 on Monday night, which was a dramatisation of a true story about Jewish children who had been in various concentration camps being repatriated and rehabilitated in England. I recommend it if you get chance to watch it.

Thanks Boz for finding a book like this. It reminds us that cruelty is not just a fantasy.
29th Jan
Thanks for this share. Watched "The Windermere Children" its just horrible the treatment of Jews and just shocking and disturbing the methods of torture. Really puts the world in perspective unfortunately a lot of this generation are so privileged and spoilt they could never imagine the atrocities that some have had to endure.
31st Jan
Thank you, Boz.

Reading this will give some insight into what people ... predominantly Jewish people ... were subjected to, assuming, of course, that people believe what is written. (When I was based in Germany, during my Army service, I visited a few different 'concentration camps' and was more than surprised with SOME people that argued that it never took place ... that photographs showing what was happening were 'doctored' by people who were trying to make it appear that way.)