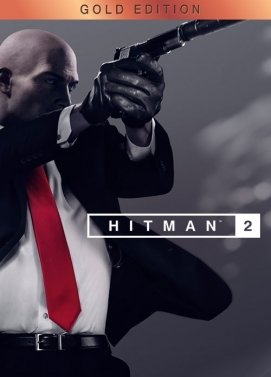 HITMAN 2 follows on the previous game with six new levels as Agent 47 hunts a shadow and starts unraveling his past. The focus here isn't on the background story though. Instead, each level and target will have their own story that 47 will use in order to plan his executions. For example, in Mumbai, we are working with a Bollywood producer; once you know that, is time to scout him, eavesdrop, look for clues; everything in order to plan the perfect kill.

Every level has a set of tasks and challenges for you to complete if you wish to do so. The better you get in a level, the more unlocks you will have; getting a weapon cache in a pre-determined location, starting in different places, etc. You will also level-up 47, which will unlock better items in his journeys.

This deal is valid for HITMAN 2: Gold Edition, which includes eight locations (Hawke's Bay, Miami, Santa Fortuna, Mumbai, Whittleton Creek, Isle of Sgáil, New York and Heaven's Island). In case you have the previous HITMAN game in your Steam library, all levels from it will be playable in Hitman 2 which improved gameplay and all HITMAN 2 QoL features. The game also includes extra modes, like the competitive Ghost Mode which is an online competitive mode, and the Sniper Assassin mini-game, in which you are fixed in a position and need to eliminate a certain number of targets in time.

The base game is also on sale on Instant Gaming for £7.64. The title price includes PayPal fees which aren't charged if you're buying through a credit card and there's less fees if you pay through Skrill.
PostTweetShare Share with WhatsApp Share with Messenger
Community Updates
Instant Gaming Deals
New Comment Subscribe Save for later
6 Comments
18th Feb

I'm a bit confused by the DLC / Versions.

Does the Gold version include ALL the DLC?

I already own the gold version of the previous one.
Edited by: "mongstar" 18th Feb
18th Feb

wbgamessupport.wbgames.com/hc/en-us/articles/360002080547-What-is-included-in-each-edition-of-HITMAN-2-
Edited by: "benhornsby1999" 18th Feb
18th Feb
Noice, noice
18th Feb
Just played the second level of this today, the map is huge. It's good, but I'm not sure I can be bothered with the repetition. That's just me though, it's a top game, well designed and challenging. Got it for £3 on Xbox from HMV last year.
18th Feb

H2 Gold does not include the Legacy DLC, though as you already own the original game that will be unlocked for free.
19th Feb
Just to let you know it went down to £11.55 now