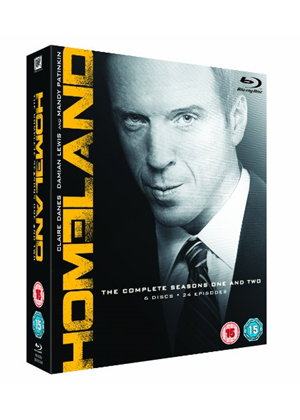 From Alex Gansa and Howard Gordon, executive producers of 24, comes Homeland. Carrie Mathison (Claire Danes), a CIA Agent battling her own demons becomes convinced that the intelligence that led to the rescue of Sgt. Nicholas Brody (Damian Lewis), a US soldier who had been missing and presumed dead for eight years was a set-up, and may be connected to an al-Qaeda plot to be carried out on American soil. Already on thin ice with the CIA, and now assigned to a desk job after an incident in Iraq, Carrie is forced to break protocol in order to prove her theory that Brody was “turned” during his many years in captivity and is now working for al-Qaeda. Meanwhile, Brody receives a hero’s welcome at home, and attempts to reconnect with his family whom he hasn’t seen in eight years.

In the wake of Israeli air strikes against Iran, the Middle East threatens to erupt in fresh violence. A woman swims through the chaos towards the American embassy, trying to make contact. The abused wife of a Hezbollah commander, she carries information about an attack--retaliation against Israel’s ally, the United States. But this would-be informant insists she will only speak to her one-time CIA handler: Carrie Mathison.

The Smile
Beirut is Back
State of Independence
New Car Smell
Q&A
A Gettysburg Address
The Clearing
I’ll Fly Away
Two Hats
Broken Hearts
In Memoriam
The Choice
PostTweetShare Share with WhatsApp Share with Messenger
Community Updates
Base.com DealsBase.com discount code
New Comment Subscribe Save for later
13 Comments
10th May
Iirc seasons 1 and 2 end on cliff hangers but season 1 to 3 was probably what could be considered a single 'story arc', after that, from season 4 onwards, homeland sort of dropped back to being one season a story.
10th May

It also went downhill after season 3 IMO, stopped watching after that.
10th May
Just watch them on Netflix, up to season 7.
10th May

It also went downhill after season 3 IMO, stopped watching after that.

It did improve a bit again. Just finished watching the last season, somewhat predictable story but a surprise ending. A lot better than the last season of House of Cards.
10th May
Great first two seasons. Well worth a fiver!
10th May
well sign up for free trial netflix and download all 7 seasons for free
10th May

There are 8 seasons. Also, difficult to watch that many episodes on a free trial.
11th May

Except it would be rather easy
11th May

You can download and keep copy
btw season 8 on channel 4 all4 app for free and is not in Netflix
Edited by: "techsavvy" 11th May
11th May

Except it would be rather easy

How long is the free trial? 30 days?
So it's easy to watch 84 episodes in 30 days? You must have a lot of spare time on your hands, and be happy to watch nothing but the same show for a month.
11th May