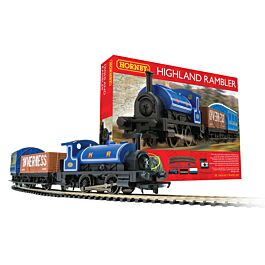 £56.24£71.1821%Robert Dyas Deals
4
Get dealGet deal
4Get dealGet deal
Posted 25th Dec 2019
Hot on the heels of the Hornby Night Mail Steam Train Set from Hawkins Bazaar here is the Hornby Highland Rambler set from Robert Days. Cheaper than I can find elsewhere - although happy to be proved wrong.

There was a time when the Highlands of Scotland were served by a number of railway lines, all operating independently of each other. The rolling stock was varied and became even more so as the Railway Companies merged with each other through the 19th century, creating a rich variety of locomotives, coaches and wagons that would often be combined into mixed trains. This set is a representation of that period and includes a small 0-4-0 tank engine, a plank wagon, and a small passenger coach. The oval track circuit in this set can be extended by using an additional track and accessory packs, creating an exciting and fully functioning model railway.

Free delivery if you use the code FREEDEL50.
PostTweetShare Share with WhatsApp Share with Messenger
Community Updates
Robert Dyas DealsRobert Dyas Discount Codes
If you click through or buy, retailers may pay hotukdeals some money, but this never affects which deals get posted. Find more info in our FAQs and About Us page.
New Comment Subscribe Save for later
4 Comments
25th Dec 2019
Anyone would be well-chuffed to get this as a gift!
25th Dec 2019
Hot - great day to expand your train collection!
25th Dec 2019
£25 in my local Asda for a similar set called the Freightmaster. Still had a six yesterday but missed out on the Scalextric set at the same price in Dartford
Edited by: "steven_stott" 25th Dec 2019
25th Dec 2019
Heat added. (More coal on the fire!)