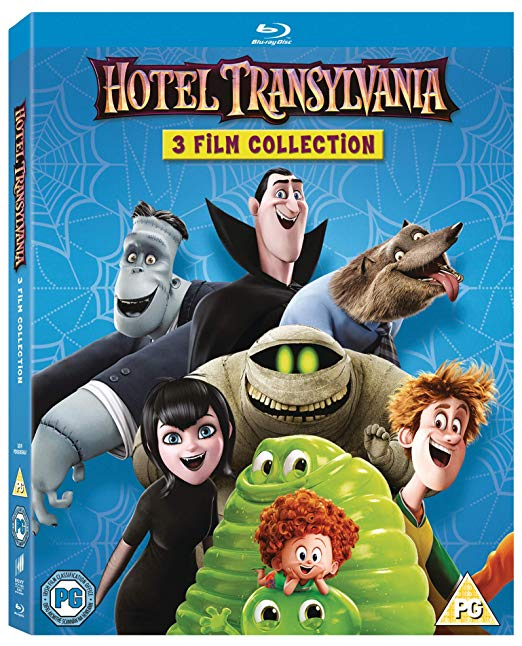 Welcome to Hotel Transylvania, Dracula’s lavish five-stake resort, where monsters and their families can live it up and no humans are allowed. One special weekend, Dracula (Adam Sandler) has invited all his best friends – Frankenstein and his wife, the Mummy, the Invisible Man, the Werewolf family, and more – to celebrate his beloved daughter Mavis’ (Selena Gomez) 118th birthday. For Dracula catering to all of these legendary monsters is no problem but the party really starts when one ordinary guy stumbles into the hotel and changes everything!

In this all-new monster comedy adventure, everything seems to be changing for the better at Hotel Transylvania! However, Drac is worried that his adorable half-human, half-vampire grandson, Dennis, isn’t showing signs of becoming a vampire. So while Mavis is on vacation, things get batty as Drac enlists his monster friends Frank, Murray, Wayne and Griffin to put Dennis through a “monster-in-training” boot camp with hilarious consequences!

Join your favourite monster family as they embark on a holiday adventure on a luxury monster cruise ship so Drac can finally take a break from handling everyone else's vacations at the hotel. It’s smooth sailing for Drac’s pack as the monsters indulge in all of the onboard fun the cruise has to offer, from monster volleyball to exotic excursions, and topping up their moon tans. But they hit rocky waters when Mavis realizes that Drac has fallen for the mysterious captain of the ship, Ericka, who hides a dangerous secret that could sink their plans for a dream holiday.
PostTweetShare Share with WhatsApp Share with Messenger
Community Updates
Amazon DealsAmazon discount code
If you click through or buy, retailers may pay hotukdeals some money, but this never affects which deals get posted. Find more info in our FAQs and About Us page.
New Comment Subscribe Save for later
4 Comments
26th Nov 2019
this comes with no digital codes i know as i orderd one
27th Nov 2019

I'll back this up as I ordered them previously and discovered there were no digital copies too. I did complain to Amazon though and got a partial refund meaning I got the boxset for £4!
27th Nov 2019

they gave me full refund

Same here, contactes on chat and said no digital, refunded in full