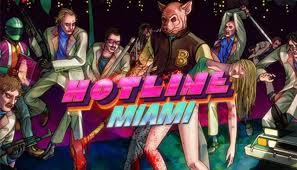 Nothing beats the Humble Bumble that included this, but for those who missed it, £1.91 is a pretty good price.

Hotline Miami is a high-octane action game overflowing with raw brutality, hard-boiled gunplay and skull crushing close combat. Set in an alternative 1989 Miami, you will assume the role of a mysterious antihero on a murderous rampage against the shady underworld at the behest of voices on your answering machine. Soon you'll find yourself struggling to get a grip of what is going on and why you are prone to these acts of violence.

Rely on your wits to choreograph your way through seemingly impossible situations as you constantly find yourself outnumbered by vicious enemies. The action is unrelenting and every shot is deadly so each move must be quick and decisive if you hope to survive and unveil the sinister forces driving the bloodshed. Hotline Miami’s unmistakable visual style, a driving soundtrack, and a surreal chain of events will have you question your own thirst for blood while pushing you to the limits with a brutally unforgiving challenge.

Over 1,000 different sprites for a fantastic variety of environments, weapons, items, and enemy death animations to keep the killing fresh

Driving beats and brooding sounds by Sun Araw, Coconuts, M.O.O.N., Jasper Byrne, El Huervo, Perturbator, Scattle, Elliott Berlin and Eirik Suhrke
PostTweetShare Share with WhatsApp Share with Messenger
Community Updates
Gamefly DealsGamefly coupon
If you click through or buy, retailers may pay hotukdeals some money, but this never affects which deals get posted. Find more info in our FAQs and About Us page.
New Comment Subscribe Save for later
22 Comments
23rd Jun 2013
Good game. In your mind you'll be like "ok, one more try...". Then an hour later you're still saying the same thing
23rd Jun 2013
Heated
23rd Jun 2013
This is an old school game which is devilishly difficult, also coming to PS Vita
23rd Jun 2013
love this game, but i made the mistake of playing it on hardcore i think, so its always 1 shot and your dead. All the play throughs ive seen the guy playing is taking 2-3 or 4 shots.

No idea how to even change down now without playing the whole game through again.
23rd Jun 2013
I have a steam code from a humble bundle I can send to someone later if they want
23rd Jun 2013

Only downside is this was my first order with Gamefly. I just received an email stating that they need to speak with me directly to verify my purchase. I was hoping I would get the code straight away like Green Man Gaming.

Anyone know how long this takes? Quite annoying
23rd Jun 2013
I used my unblock-Us service to access the Gamefly chat (unavailable in the UK) and got them to verify me.

Bizarre process as all they did was phone up and ask "is that Ashley?" and I said "yes" and that was the only verification they needed!

There's no difficulty options, the game is supposed to be one hit and you're dead, im not sure if there's a mask that allows you to take more damage though.
23rd Jun 2013
If anyone else is feeling particularly generous today I'd love to give the game a play through. With all these deals it's getting harder and harder to keep to my "no more impulse steam purchases until the finances get better" rule, so many good games under £10!
23rd Jun 2013
+1 on the list, would love a key if anyone has one spare from the humble bundle
24th Jun 2013
Any deals for mac version?
24th Jun 2013
One of the best games I've ever played. Easily.
24th Jun 2013

Yeah, one of the masks makes you immune to the first shot you take, however, as most of the enemies armed with a firearm have a shotgun or assault rifle (more often than not) it serves little purpose. You are better off using one the masks that grants killer doors or killer throws or the punch that kills enemies.

That said, this game is great. As someone mentioned above, you can very easily get caught playing certain sections of this for hours.