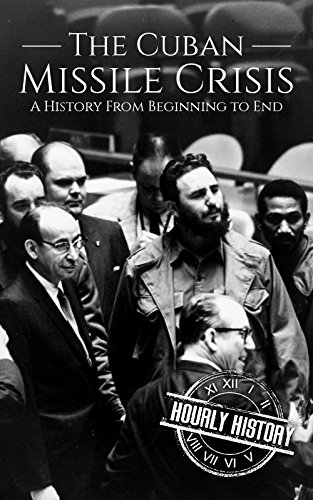 Discover the remarkable history of the Cuban Missile Crisis...
Free BONUS Inside!

The Cold War between the United States of America and the Soviet Union lasted for more than 40 years. In general, this was a war of spies and subterfuge, of covert action and espionage. There was always a danger, however, that an error of judgment on either side could suddenly cause the Cold War to turn red-hot with an exchange of nuclear weapons. On many occasions, tensions between the countries increased, but the prospect of all-out nuclear war between America and Russia was never closer than during a two-week period in October of 1962.
In response to the placement of American nuclear missiles in Turkey, Soviet leader Nikita Khrushchev secretly ordered the transport of Russian nuclear missiles to the island of Cuba in the Caribbean. These were capable of reaching and destroying almost all American cities in a matter of minutes. When this was discovered, the U.S. administration under President John F. Kennedy decided that the threat had to be removed, even if this meant risking war with Russia. The Americans set up a blockade of the island and considered air strikes and even a full-scale invasion of Cuba. Forty thousand heavily armed Russian and Cuban troops supported by tanks, aircraft, and even tactical nuclear weapons stood by to do anything required to repel an American attack.

It was clear that the United States refused to accept the presence of Russian nuclear missiles less than one hundred miles from the coast of Florida. It was equally clear that Russia was determined not to remove the missiles and desert its Cuban ally. An armed confrontation between the two superpowers appeared inevitable, and there seemed a very strong possibility that the world was on the brink of full-scale nuclear war.

Discover a plethora of topics such as
PostTweetShare Share with WhatsApp Share with Messenger
Community Updates
Amazon DealsAmazon discount code
New Comment SubscribeSave for later
2 Comments
4th Mar
Free book that seems to get good reviews. what’s not to like.
10th Mar
£1.99 now