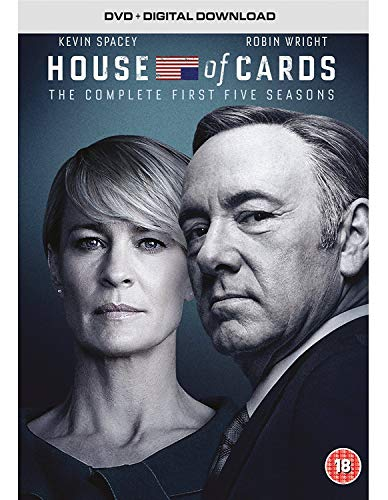 Feels like a good price here for 5 seasons of a good TV series, also there on Netflix ofcourse, if you prefer it there.

Season 2
Masterful, beguiling and charismatic, Francis Underwood and his equally ambitious wife Claire (Robin Wright) continue their ruthless rise to power in Season 2 of "House of Cards". Behind the curtain of power, sex, ambition, love, greed and corruption in modern Washington D.C. the Underwoods must battle threats past and present to avoid losing everything. As new alliances form and old ones succumb to deception and betrayal, they will stop at nothing to ensure their ascendancy.

Season 3
In Season 3 of “House of Cards”, President Underwood fights to secure his legacy while Claire wants more than being the first lady – but the biggest threat they face is contending with each other. Frank will stop at nothing to conquer the halls of power in Washington D.C.

Season 4
They’ve always been a great team. But now in Season 4 of “House of Cards”, Frank and Claire become even greater adversaries as their marriage stumbles and their ambitions are at odds.

Season 5
In the midst of the presidential election, tensions mount in the White House as Frank and Claire continue to navigate their political careers and redefine their relationships – particularly with each other.

Special Features (on Season 2 and 3 only):