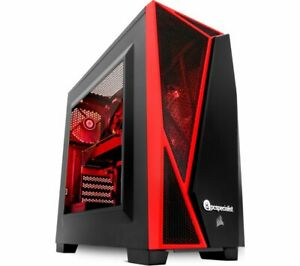 So here we have another build

If your new to me then i find prebuilds strip them down in the best possible way hence why i like CCL! cos they tell u all u get, then i can put in prices but elsewhere it gets err awkward but overall idea is to see what sort of deals we have and then it gives people an idea, if your a self builder ive placed many CPU's on..

and i try looking for the low cost build option,... thats the main aim but then u get these deals pop up n folks asking me.

and ive had plenty of folks asking me "how does this one look"..

so here we have this one thanks to the ebay codes...

the other higher up Tornado didnt say what it came with.. thanks to a member for his assistance... it did have an SSD NVMe and it said neither on the ebay list, so possible this could have atleast a 120gb if not 240gb more chance of a 120gb on typical yesterdays standards.

so in all about £423-440/448 depending on SSD if some of these discontinued parts got released again into today's typical market.

There price built with windows £480 after discount,

Alternative to this:
you have the HOT DEAL of mine:
hotukdeals.com/dea…486

so having everything the cheapest on the above ukhotdeal link is this:

£485...... doesn't include windows which is very easy to do as ive mentioned loads of times and doesnt include the SSD if going cheapest method... so £500 if it does.. and defo comes with a better board, but we will never know fully on this curry's one,

but if u are a person and the top whack is £480....... and u cant be bothered to put windows on it then the £480 deal by CCL... then this currys deal is not that bad for them, its an alternative idea, and thats one of the alt options of all the prebuilds, giving people ideas of what i recommended and alt item in the prebuilt range......

** CCL has the option to add 2x8gb 3000mhz which is better, but as stated above if budget is tight and u cant be bothered to put windows on, ... the currys deal is also not bad at upgrading laters on either, sell the 1060 in afew months, they sell decent enough on used market, not much less then the guide ive given above, then upgrade accordingly subject to budget laters on. and also ram,

clearly as more prebulds i get on here then some negative comes with it = not bothered my aim isnt to help them.
PostTweetShare Share with WhatsApp Share with Messenger
Community Updates
EBay DealsEBay discount code
New Comment Subscribe Save for later
4 Comments
7th Jan
It says the PSU is a VS450 and the RAM is 2133.
Edited by: "Gormond" 7th Jan
7th Jan
Thanks for these posts. I'm looking at changing my old pc soon so these threads have been great thank you
8th Jan
@sarden84 - CCL have dropped prices overnight on some builds I've been looking at - I've got very specific needs re: processor and graphics card as the PC will be used as the base machine for live performances at a music venue so just need 4 cores and lots of VRAM.

My main question, that I'm struggling to find answers for, is this: B365M or H310M? If builds are basically the same price, am I better getting the B365?

will be taking a closure look laters at prices, some of the builds ive put on have gone up £2-10.. its the adata ram on them whats making it float, demand=floating prices. the skyer is selling like hot cakes!.

more details regarding intel boards here: techreport.com/rev…ts/
itll give u an idea on the cross differences