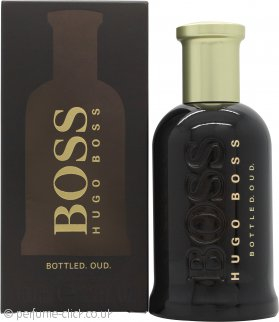 Boss Bottled Oud by Hugo Boss is an oriental, woody fragrance for men.

The masculine, yet luxurious fragrance by Hugo Boss opens strong with fresh citruses and apple notes. The spicy heart contains notes of saffron, clove, cinnamon and labdanum, which blend into a woody base of oud, sandalwood and cypriola.

Boss Bottled Oud was launched in 2015 and was released as a limited edition to the brands Boss Bottled collection.
PostTweetShare Share with WhatsApp Share with Messenger
Community Updates
Perfume click DealsPerfume click voucher codes
New Comment Subscribe Save for later
10 Comments
13th Jan
Voted hot and ordered.
Much nicer than the Oud Saffron and Oud Aromatic (in my opinion). Lasts pretty well without being overpowering.
13th Jan
I ordered this in December as i’ve had 3/4 bottles from elsewhere like duty free previously and loved the scent. I was shock when i got this because it didn’t smell like the original and the smell lasted the best part of 20 minutes. Please check certain reviews of this company before purchasing. I sent mine straight back and purchased from john lewis.
13th Jan
The Company has a lot of bad reviews, especially not genuine items. Please read the feedback left by customers.
13th Jan

9.6 on trustpilot?
13th Jan
Not so hot on Reviews with a 1.93 rating.
I've already ordered, so will post my own review when it arrives.
I'm pretty familiar with the genuine item so if it's duff, it'll be going straight back.
Edited by: "Grobbendonk" 13th Jan
13th Jan
Thanks ordered.
15th Jan
Just turned up and it looks pretty genuine to me. All nicely sealed as I'd expect and has the unmistakable Hugo Boss Oud fragrance, punchy and strong. I'm happy with the purchase.
Edited by: "Grobbendonk" 15th Jan
21st Jan

I believe so. It all looks and smells good to me. The scent lasts about as well as the bottle I replaced (bought in Duty Free).
22nd Jan

Thank you
Will order now