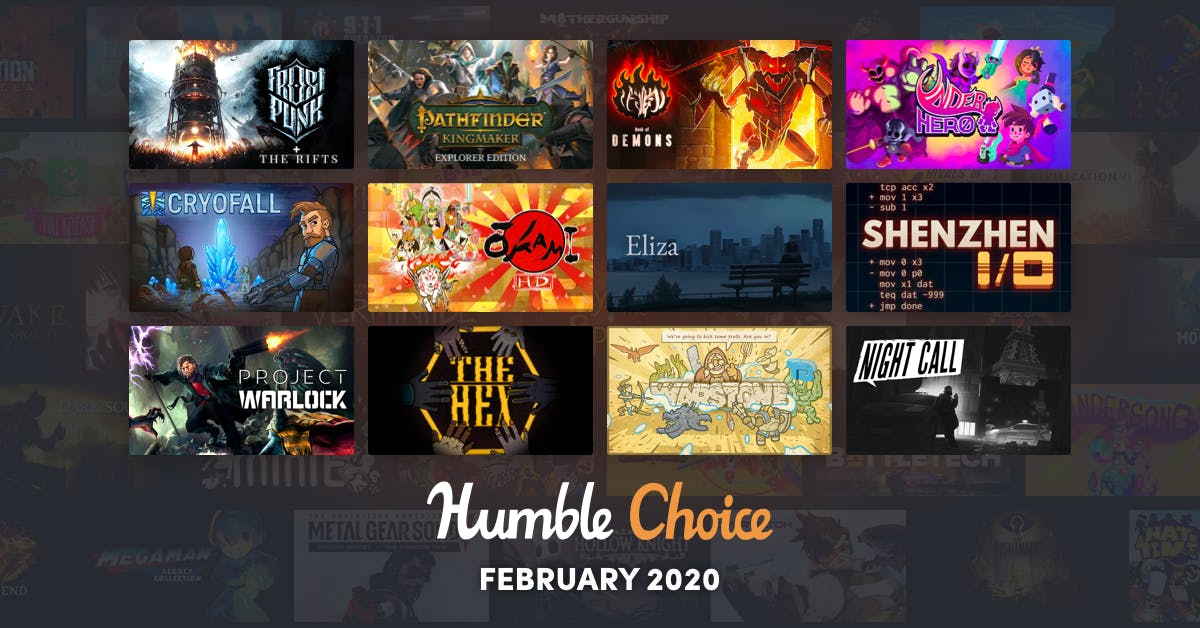 Humble Bundle February games just got announced. As the avid gamers would know by now, bundle is now rebranded as classic and if you were an original subscriber you still get the 10 game’s listed below for the usual $12 or ~ £9.73.

If you are a new subscriber or joined choice last month after the rebrand however then you get to pick 3 games for £11.99 or 9 games for £15.99 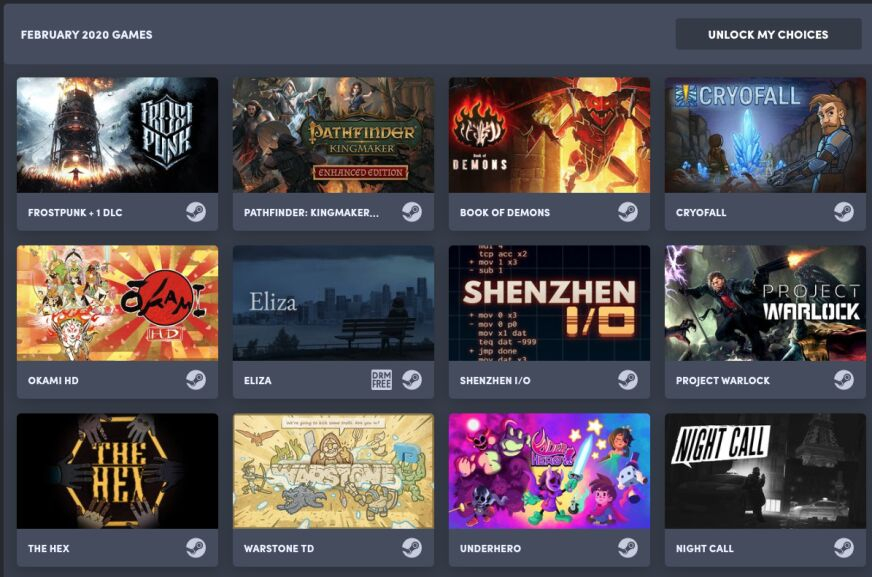 Games In The Bundle

Also, "Frustpung" sounds ace but I couldn't find it anywhere

Creativity at its best, eh
7th Feb
Definitely pausing this month. Nowhere near as good as last time, especially when the highest profile game there is something on Xbox Gamepass.
7th Feb
So handy that you can pause. I want to play Pathfinder but not for £10
7th Feb
Be pausing this month but heat added thanks for posting
7th Feb
Yeah this is a pause month for me too.
7th Feb
Great value again, at least 4 games I want for under a tenner on classic is an easy win but 10 games is fantastic.
7th Feb
Paused this month.
7th Feb
100% pause month.
7th Feb
No such thing as "early unlock" any longer
7th Feb

No such thing as "early unlock" any longer

A depressing number of people never do.
7th Feb
Actually fairly tempting for me. The Hex and Eliza both sound good, would be nice to have Book of Demons on Steam too for cloud saves etc. Shenzen is meant to be amazing but Spacechem hurt my brain too much, can't imagine Shenzen being any easier. Have also been meaning to play Okami for a long, long time. Hmm
7th Feb

Thanks mate that bundle looks like a no brainer at that price!
7th Feb
Before I forget, just a quick reminder that for anyone with any spare keys, from here or elsewhere, donations for my weekly giveaways are always welcome!

Here's the latest: hotukdeals.com/dis…121
7th Feb
Instapause...
7th Feb
I know this is probably a stupid question but does pausing now mean I can skip this month and start again next month? Just want to make sure it isn’t get this months games and skip next month.
7th Feb

Skip, skip, skip to my lou

Dammit, skipped 2 months already! I don't think I can skip another one!
7th Feb
This is a pretty decent scheme, I already own some of these games, so not worth it for me but it's a good bundle.
Edited by: "yomanation" 7th Feb
7th Feb
Cryofall isnt a bad game mechanically, but you put your base in the wrong place and nobheads will grief you all day long. Pretty much unplayable unfortunately.
7th Feb
Night call is in gamepass too if that helps anyone choose
8th Feb
Looks like I'm in the minority but I actually had quite a few on the wishlist in this month. Frostpunk, Okami, Shenzhen, Project Warlock. Already have Book of Demons unfortunately but that's nicely balanced by a couple of interesting looking ones I hadn't heard of.

It feels like monthly may be on the way out given the reception this new iteration has had. It's a shame really as this is a much better format but the new pricing tiers are nonsense for anyone but existing subscribers.
8th Feb

Less than £2 per game for what are generally good to great games is still good value, even though it's more expensive than it used to be. Frostpunk + DLC on its own almost reaches the price of the basic tier, even using its all-time lowest prices.
8th Feb

So handy that you can pause. I want to play Pathfinder but not for £10

If no one has offered I'm selling off my unwanted keys/ dupes. That's one I'm not fussed with generally selling my keys for £2-3 each not after making anything off it
8th Feb

Value is relative. Even their best value tier is still more per month than paying full monthly price for game pass and origin access combined. Or Netflix and Spotify together. Or PS+ and Now TV together. Or a whole year of switch online for the cost of 1 month.

I realise those services are effectively renting whereas HB is buying but it's all competition for people's limited funds framed as a monthly service. £16 is a significant chunk of money to chuck out every month and currently far too much of the payoff is coming from one or two games. You mentioned this a good price just for Frostpunk and indeed it is but what about the people who don't want it, either because they have it (which likely when your headliners are a couple of years old) or because it's just not their kind of game? The bundle's value will plummet for those people.

Don't even get me started on the basic plan which has been priced in such a way that you have to assume it's only there to make the premium look better.

These prices are, at least as far as I can tell, this high because of those few noticeably bigger games being used to grab attention. It's as if HB are still choosing games based on the old monthly model of buying blind except for a 'headliner' game or two. They can't go devaluing massive games by making it possible to get them super cheap so the price per game gets driven up. Subsequently someone only interested in 3 of the smaller games may very well be able to get them cheaper in a Steam sale than with HB. Really anyone who isn't interested in these huge headliner games faces a much worse value proposition because of how much they throw the overall prices off.

I think HB need to either work towards reducing the difference between perceived value of the highest and lowest games in each bundle (i.e. less headliners and games people see as filler, more medium interest games) or they need to re-jig the payments again. Maybe introduce a tier system where the plans with the higher value games are more and those with the lower value games are more affordable. Or a credit based system where your payment plan gives you X credits to spend and the games have differing credit costs.

Like I said this month is decent enough for me just as every month since the change has been. But I seem to be in a minority and I'm paying less for more games compared to new customers. This service will live or die on whether or not it can sustain a large customer base and right now I think it's struggling to sustain interest from some long time subscribers, let alone attract new ones.
Edited by: "Battenberg" 8th Feb
8th Feb
Anyone else finding the games to be lacking abit from the new scheme started, might just be me
8th Feb
Pause for me too... next!
8th Feb

Hmmm it already is well for Xbox at least
8th Feb
When I went to pause they offered me $2 off so it might be worth starting the pause process even if you're interested in it.
8th Feb
At last FROSTPUNK + DLC at a decent price with other games thrown 👏 ‌ 😁
8th Feb
March’s lineup better return to good otherwise this new program isn’t working out for new customers. People who may have given classic status keep pausing don’t quit
9th Feb
Pause for a month, got a discount
Edited by: "JohnNg" 9th Feb
10th Feb
Bombchu points out interesting provenances for some of the games and made me more excited about the bundle in general: 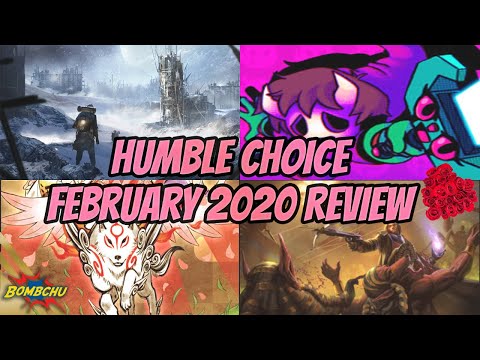 Tales from Off-Peak City (Vol 1) - follow up to Off-peak and the Norwood Suite.
Hex - follow-up to Pony Island.
Shenzen I/O - Zachtronics (maker of Magnum Opus, Infinifactory and TIS 100)
Eliza - Zachtronics (again)
11th Feb
I can only see January bundle?
12th Feb
still have a spare shadow of war and two point hospital from last month. Really need to stop buying games and wait for them to appear on humble. Already have frostpunk so pausing for sure.
Edited by: "tjc2005" 12th Feb