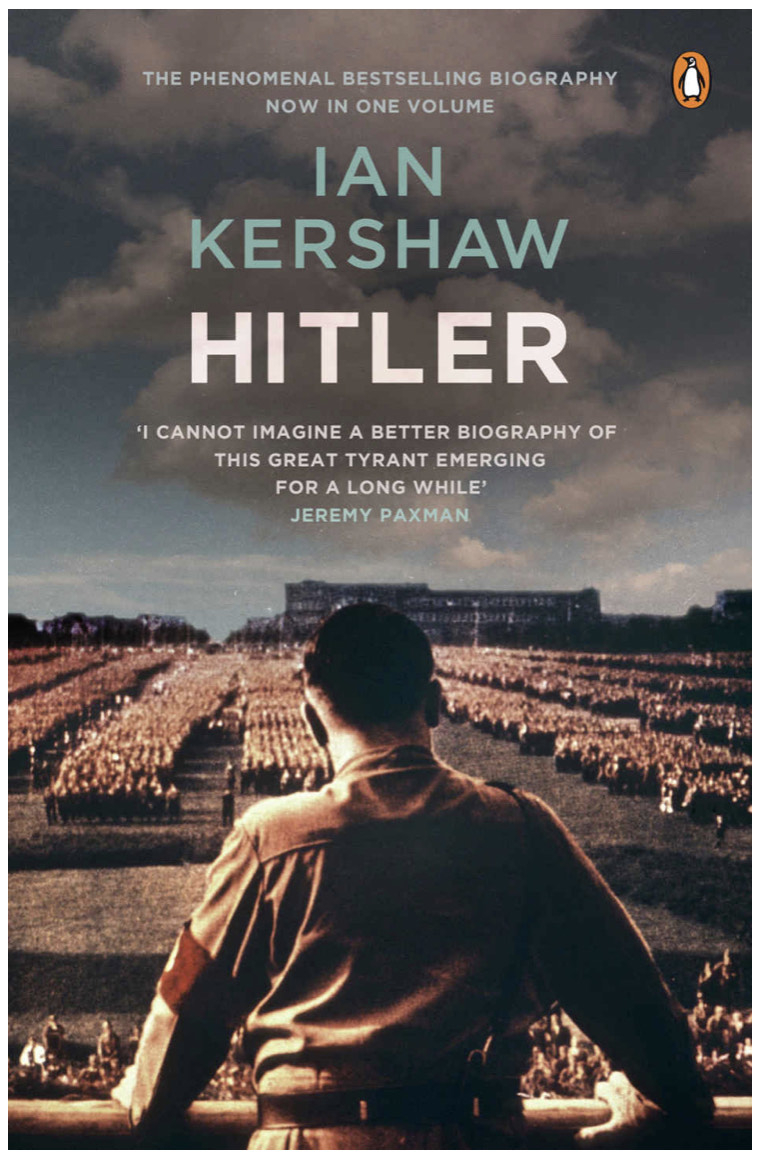 When the two volumes of Ian Kershaw’s biography of Hitler, Hitler 1889-1936: Hubris and Hitler 1936-1945: Nemesis were published, they were immediately greeted around the world as the essential works on perhaps the most malign figure ever to hold power in modern Europe. In the face of considerable demand for such an edition, Kershaw has now created a single volume version. The result is a frightening, fascinating narrative of how a bitter provincial failure from an obscure corner of Austria rose to unparalleled power; how the half-baked, contemptible ideas of a vagrant former art student coalesced into an ideology that for twelve horrific years shaped the fate of millions; and how both in his determination to impose his will militarily and to fend off his many enemies he unleashed a genocidal Armageddon.

No one individual can stand in as the scapegoat for the vast social, technological, economic and military forces that shape our societies but if ever there was one man whose ideas and personality shaped and cowed those forces, as well as embodying them, it was Hitler. This is his story and Kershaw tells it with unique authority, and with moral anger.

Is there anything fresh to be said about Hitler? He is an icon, maybe the icon, of the 20th century. He was a failed artist with Wagnerian fantasies, a slob who could not get up in the morning, but he exposed the frailties of modern civilisation in a way that should still make us giddy. How? Was it his doing, or German society’s?

Professor Ian Kershaw has produced a work of definitive scholarship that will be the standard for years to come. It was badly needed; since Alan Bullock’s 1952 classic Hitler: A Study In Tyranny and Joachim Fest’s Hitler (originally published in 1973) there has been much valuable research, all of which Kershaw seems to have read (there are 200 pages of notes). Add to this the media (and, by extension, public) fascination with the nature of evil, and a resurgent interest in right-wing groups, and this book becomes long overdue.

Kershaw deals rigorously with the bones of his subject’s life. He has no truck with psychological padding, and calmly demolishes most of the quasi-facts that have sprung up—if in doubt, he allows space within the chronology. His description of the path to the Chancellorship, which was always more messy than messianic, is painful to behold but gripping to follow, and concludes in 1936 with Hitler at the height of his “Hubris”.

This is an important study of the character of power, as clearly written as it is intellectually engaging. —David Vincent

‘Hitler has always been terrifying, but Kershaw makes him more intimately repellent.’ — Observer

‘Kershaw’s Hitler stands as our clear beacon of truth, illuminating a dark age of terror and medacity’
— Craig Brown, Mail on Sunday

‘Kershaw’s brilliant account is a depressing book to read, not only because of what it tells us about Hitler but also because of what it says about the masses who followed him.’ — New York Times
PostTweetShare Share with WhatsApp Share with Messenger
Community Updates
Amazon DealsAmazon discount code
New Comment SubscribeSave for later
4 Comments
1st Sep
Thanks had already the audible book.
1st Sep
Having read both Hubris and Nemesis, the research that went into this work is truly astounding. Should be compulsory reading at secondary school level.
1st Sep
The biggest loser in history.
1st Sep
Cheers batezy🌞