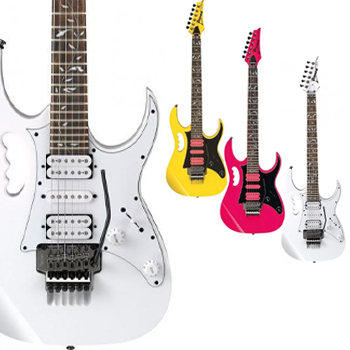 I've been a big fan of the Jem for years now, although prices aren't exactly what most would consider cheap, for a full fat model. These are the cut down Jem Junior models, which have lower specs but offer the Steve Vai Jem style at a much more affordable price point.

Despite the guitar being called "Junior" This isn't a small child's guitar as some might think. This deal won't be for everyone, as you are paying a premium for aesthetics here. With the prospect of upgrading parts as time goes on though, it could tick some boxes for a few of you.

The price is about the best I've seen and includes the white, yellow and pink options.

Use code PROUD10 for this price

Steve Vai Signature JEM Junior Overview by GAK:The 1987 Chicago NAMM Show marked the introduction of the Steve Vai-designed JEM guitars and constituted a major turning point in the fortunes of Ibanez and the development of the electric guitar. The JEM, with its cutting edge floating tremolo and monkey grip, took off like a rocket. Ibanez was finally viewed as an important innovator and there would be no looking back. 30 years later, the JEM has become an iconic image in the world of guitar and, for over a decade, its sister model, the RG, is second in worldwide sales only to the Fender Stratocaster.So 2015 saw the introduction of the JEMJR/Jem Junior in White. Featuring a Mahogany body attached to a Wizard III neck, the JEMJR offers many of the JEM’s distinguishing characteristics; the H/S H pickup configuration, the “Tree of Life” inlay, a double locking tremolo system, and of course, the famous Monkey grip and Lion's Claw tremolo cavity. And now available in two of the famous finishes inspired by the legendary JEM777, eye-catching Pink and Yellow!There will be limited stock of these, pre-order now to reserve yours for delivery November 2017.

not got 7 strings? whats going on? Steve wouldn't like this.

He does use 6 strings as well. Have the white one got it a few years ago when it came out. For the money its a good guitar.
18th Mar
It's still pretty reasonable specs for the price isn't it, eg locking trem, vine inlays. Not my cup of tea but a good price nonetheless