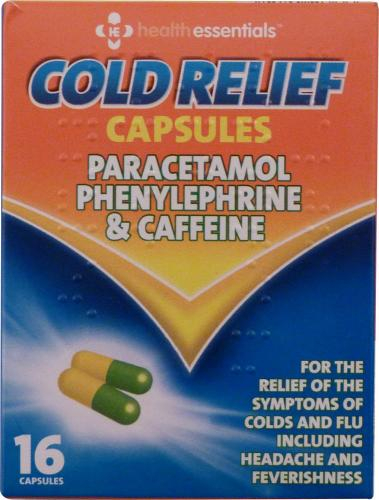 Identical Sudafed/ vicks/benylin cold & sinus pain capsules in Aldi or asda Only 55p under own packaging but EXACT SAME item instead of £2-3.50

These are not generic replicas - they are the same product !

OK just had my flu jab Friday and co incidently have sore throat, sinus pain, congestion etc today and yesterday. Was down to my last few sudafed tablets so had look in aldi nearby and noticed they had some own brand . I checked the ingredients and not only were they the same, the product licence and manufacturer are identical (see photos below).

There was somthing similar mentioned on watchdog last series on how savings can be made.
So unlike the smellalike knockoff perfume they do, these are the exact same item in a different package with a massive saving.

As pointed out below the own brand asda and Tesco are all the same item but slightly more in Tesco with their own packaging different to the aldi one.

Thanks to molerat for the details, these tablets are also sold as: 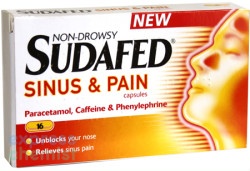 But they're more effective. It's called the Stupido Effect.
6th Oct 2013
Cold, no Pseudoephedrine
6th Oct 2013

also my ingredient of choice - did pick up a load of Tesco flu tabs last year for 50p keeping me going for a bit... esp with these sinuses at the moment
6th Oct 2013
Many people don't realise that similar products are occasionally all made, literally together, in the same batch. They prefer to pay for a brand name.

Of course, it doesn't always apply!
6th Oct 2013
Great post OP, I too have been telling people this info too, after watching watchdog and checking fir my self.

Also stopped having the flu jabs because of the syptoms after.
6th Oct 2013

Thanks, its first year I've ever had so had heard it can cause these but I asked the Dr at the time and she said some people say its gives them similar symptoms but it doesn't cause the flu...

I can deal with a cold but don't fancy begin laid up ill so hopefully they will end soon.
Edited by: "mrwhitelabel" 7th Oct 2013
7th Oct 2013
Holy crap OP, nice find. The product licence (PL) codes are the exact same.

deleted67074
7th Oct 2013
I'm actually beyond shocked that people didn't know all this already!! Do people not look at the ingredients in these medicines and compare them?

I also can't believe anyone would stop getting the 'flu jag because it gives them some symptoms. It's still MUCH less horrible than getting 'flu and if anything, should make you feel more relieved that you're not getting the full blown virus. You're not offered the 'flu jag for fun, it's because it would be dangerous for you to have 'flu. I always get symptoms but wouldn't dream of not getting the jag.

plus the placebo effect. My brother wont buy anything but nurofen even though I told him that iburprofen is exactly the same! He tried ibuprofen but swears its not as good lol

would you willingly inject mercury material into your system!?

As\ far as these generics are concerned, yes pretty good, just learn about the basics you need within the tablet not the brand.
Pseudoephedrine is the magic bullet coating if you can get it for added relief, but for your basics these'll do just fine thankyou.

Where medicines are concerned simply ask for the best generic brand for your symptoms, pharmacists are there to help (except in my experience the ineptitude encountered within my local tesco's) where they don't know how to wipe their own backsides in the pharmacy.

(wife a specialist font of medical knowledge) ..insofar that our kid gets a major dressing down for hygiene infractions based on the winter potential to infect whole wards of patients & staff by lax behavioural stupidity especially in the now upon us bug season, (open heart surgery).

Stock up now keep on top of the symptoms!

nice find OP.
7th Oct 2013
The thing is, this is not a generic replica of the sudafed tablets it is the exact same thing just in its own packaging. People may see generics with similar ingredients and be unsure where in the world they were made or be aware they have the same things perhaps in different quantities and as you say prefer the placibo of a brandname but very few would look at the product licence code and see they are identical.

Were are not talking the same with cereals where you may have kellogs frosties and similar ingredients but not quite the same own brand frosted flakes, these are the equivelant of frosties in another box at 75% off the price.
Edited by: "mrwhitelabel" 7th Oct 2013
7th Oct 2013

You will be pleased to know that thiomersal (a mercury-based preservative) is not the same as mercury. Just like a lot of chemical compounds, a single atom change can completely change the effects, toxicology and half life of a compound. However as a precaution it was removed from young children's vaccines to make sure that the safety limits or not reached. Many people take this to be a sign of its danger but there is no evidence that shows it is dangerous. I also think its been pretty much been phased out entirely for at least 5 years now but I'm not sure.

Either way, please do not worry about it, you probably get more mercury (actual inorganic mercury) from a tin of tuna!

Further reading
7th Oct 2013
Been using these for a while now and always this price but I see the "deal" is comparing to big price tag brand names so well done OP for pointing this out. Have some heat
7th Oct 2013

I'm sure if there is mercury it would have to be a safe level otherwise they would be poisoning you which would make it illegal.

Do you think along the same lines with regards to radiation ? Bearing in mind its everywhere.

I watched a documentary about the fallout from the fukishima plant and they were talking about the drinking water being contaminated with nuclear radiation but were not concerned as it was within safe levels !

I for one believe in science and wouldn't think twice about getting the flu jab. If you've ever been struck down with it you'd understand. If you've not, the only way I'd describe it is if someone was to drop £10 million quid at your door and all you had to do was get out of bed and take it in...

...you would stay in bed

deleted692834
7th Oct 2013
I work in a pharmacy.
as long as the licence numbers match up then they are exactly the same product.
if the licence numbers don't match then they are slightly different, but they do the same job.
non branded products are just as good. take calpol for example. most parents buy that for their children and it's expensive. but non branded paracetamol suspension is just as good and is what u get on the nhs
7th Oct 2013
WATCHDOG info:-

bbc.co.uk/pro…ers
7th Oct 2013
ingredients being the same doesn't mean the product is exactly the same thats wrong
they will work the same once dissolved but have different coatings, flavourings and delivery methods which are not worthless for some
for the low cost per unit price of these its pretty insignificant as long as you know what you are buying

Thanks for the link, will read up, ..very well pointed out, don't want to introduce MORE crud in my system, with a product that whilst deemed "safe now" has potential to kick back further down the line, i'll make an informed choice & research it.

..& Thalidomide is perfectly safe for pregnant mothers eh!? ..there's inherent risk in everything, blind trust in cases such as combined vaccines for gulf war veterans, or grunts stood in front of atomic explosions to see what happens, a moment taken a life lived with the consequences & no going back, oO

You clearly don't know me have ongoing nerve ending problems (sometimes an advantage), having contracted a virus which still lingers but never identified & properly treated, turned my legs black & system shutdown temporarily paralyzed me for the best part of a week, couldn't even reach my mobile phone (they were not so mainstream then & I was on my own), takes me down to a lesser degree periodically, ..so yeah at the very least I am familiar with a dose of flu

i've had the jab in the past & can't honestly say whether it's helped or not, the jab is a guess of likely worst offenders based on the W.H.O. list which again is hit or miss, I'll aggregrate info on the jab & base a decision on quantifiable factors, as the kid would have one too.

by being a bit more attentive to basic hygiene measures* we stand a better chance of not getting sick in the first place & having a bug latch on.

Contac! ...great in the old microball gelatine? capsule, somewhat rubbish return in it's new solid tablet form (damn those meth heads, or whatever).
7th Oct 2013
Wish I had read this article an hour ago - just got back from Aldi and saw these on the side near the tills, but didn't know if they would be any good. I understand now about the product licence number, but does it also have to be identical for where the product is manufactured (do both need to be the same or can it just be the licence number)? Thank you.
7th Oct 2013
regarding Mercury there is mercury in the "silver" fillings you get on the NHS.

Whether enough is released over the lifetime of the filling to create a problem is up for debate.
I think a fair amount of European countries did ban mercury fillings though?
7th Oct 2013

Each product has its own licence number so if they are the same the manufacturer will all be the same as they don't share Iicence numbers
The distributor may be different though they are the ones who do the packaging.
7th Oct 2013

unless the licence number is the same, as they are in this case, which means THEY ARE exactly the same item.
7th Oct 2013
are these the placebo off-the-shelf Sudafeds, or the ones that actually work that are over-the-counter? I assume the former.

Well paracetamol is no placebo it is a proven pain killer , caffeine will keep you awake hence non drowzy

Edit, just reads its a degongestant and reduces swelling in the nose membrane
So no these are not placebo drugs...
Edited by: "mrwhitelabel" 7th Oct 2013
7th Oct 2013

aldi version comes in those horrible 2 part plastic capsules
that the same for sudafed? google shows yellow pills but dunno.

The sudafed ones I had first were the same
7th Oct 2013
If it has that pl number on it the item will be in the same form
‌ medicines.org.uk/emc…spc

er a placebo actually does nothing at all apart from make you psychologically believe you're treating yourself. Eat 20 packs and you'll see.

A bit of work on the night shift would help to keep you awake, just a suggestion?
8th Oct 2013

they dont make this sudafed anymore as far as sudafed site goes, they do the stronger version
looking at info on that it does actually go as far as to specify the colour and coating