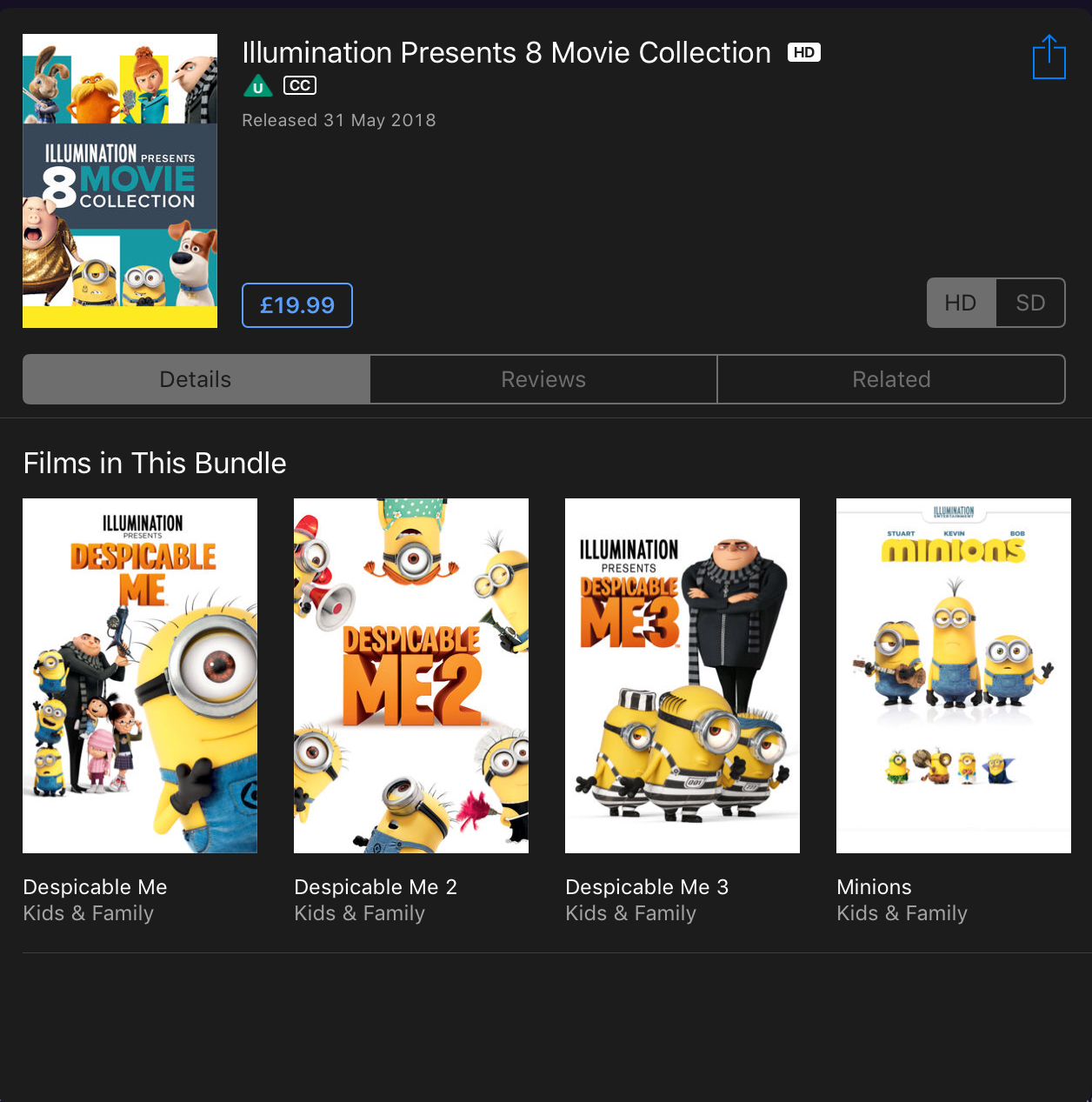 Couldn’t make one thread of iTunes film deals? Or just like spam?

There have been a load of reductions but Ive chosen to list some of the better ones seperately. Ive done them seperately because the titles involved are so diverse, but im guessing you would rather people were forced to vote on Alien and Minions at the same time?

So no, i couldnt make one thread. Quit trying to be a smart little troll, back under your bridge you go
3rd Sep 2018
Voted hot
3rd Sep 2018

They aren't voting on the content though, just on "are these good deals". I have a keyword search set up for iTunes, as I'm sure many do, but I wouldn't be buying a load of video on it as we don't have anything connected to our telly that would support it, so if I buy films I tend to get them on amazon. So, for me, having 8 seperate deals for the same redundant platform come through overnight is not helpful.

I have not voted on any of them, but I think you'd have got a really hot deal if you had put them together, but now you have a bunch of cold deals it looks like, as I'm sure I'm not alone in my situation.
3rd Sep 2018
Spamming with multiple posts. Guaranteed every one will go cold.
3rd Sep 2018

Thats where you and I differ. I post these deals to inform others of the price, i dont care about “heat”. The HDUK voting system has been messed up for a long time, if people want to make a deal cold out of spite, then they will. I dont lose sleep over it. Hot or cold, my post still remains to inform others
3rd Sep 2018

Spamming with multiple posts. Guaranteed every one will go cold.

Oh no really? I had dreams of being an HDUK celebrity!

Nobody wants to see your deals, if they did they would vote them hot. You're wasting Internet.
3rd Sep 2018

Maybe I’m missing something here but if iTunes is a redundant platform to yourself then why have iTunes set up as a keyword :/

IMO if the deals are worth it I’d rather see individual movie deals rather than one with bulk especially if they’re different prices.
If a load of movies are all say £3.99 then yeah a bulk listing would suffice.
3rd Sep 2018
It would of been easier for yourself and everyone having 1 post with all the deals listed in the 1st comment with links
Do you see when people post deals from Xbox or PSN? There aren’t 60 individual posts for the deals, someone tends to condense all 60 deals into 1 post for ease of use.
But each to their own
3rd Sep 2018

I would guess deals on iTunes gift cards for apps and music.
3rd Sep 2018

...rather be wasting internet than wasting valuable air!

Here's the thing, the movie's are not worth it! Why do you think they're all voted cold? Nobody is interested!
3rd Sep 2018
You can pick up ultraviolet digital codes for these films for £1, play well on iPads....
3rd Sep 2018

Voted hot on a couple of these. But, surely if you're posting on a site that bases itself on a voting system, you should at least try to go with it? Because of the voting system, the higher the heat the more people see the deal, and are aware of it. By ignoring it, you massively reduce the number of people being informed by your posts .

Not true at all, some really good deals there for some decent movies. The only reason they get cold votes is because some users are irritated by individual (spam) posts, so automatically vote them down regardless of whether it's a good deal or not.
3rd Sep 2018

Also as I found earlier on a few deals this morning when I voted hot the cold count increased.
Another member commented that this happens when the lots of deals get posted by the same person within a short timeframe.
3rd Sep 2018

Listen, there were about 40ish price drops on itunes digital movies this morning. I chose what i believed were the best savings and posted 7 deals. I didnt want to write a complete list of all 40 because i believe it to be a waste of time and not all of the 40ish films were good deals in my opinion.

So i have 2 options, write a list containing only 7 out of 40ish films to which i would hear cries of “you missed loads”, “ list isn't complete” etc. The second option was to take the time to post the 7 individually and highlight the deals i thought were good, this allowed for clearer posting, easier searching and more relevant content for each post whereas the massive list would have mixed “Aliens” with “Minions”.

Basically you want me to conform or face the wrath of those who would vote me cold. Surely your energy should be focused on those abusing the system and voting cold out of spite rather than belittling a user who has actually tried to save people money. I know, as do others judging by comments that some of these deals should be hot, but they are not due to voting abuse. To be honest, plenty of people abuse the system when it comes to itunes posts anyway, often voting cold becuase they hate itunes, so it doesnt matter how you post these deals. Haters gonna hate as they say.

Anyway, enough of explaining myself. I did what i set out to do, make people aware of deals and ive had several people thank me for it. I really dont care if the deals went cold, i can assure you i lose no sleep over it. The only ones getting emotionally involved in this topic should really put the laptop/tablet/phone down and spend more time with thier loved ones as they seem to have issues with reality and what actually matters in life.

As for the trolls posting inflammitory comments to myself and other users, they are just snivelling excuses for humans that really dont know how to socialise with others, the only real power they have is the ability to vote cold on an internet site. This most likely makes up for a lack of something in their own lives, maybe its wealth, happiness or just smaller inadequate body parts.

ITunes as a video provider is redundant for me, unless I want to watch 4k films on an iPhone screen! I have the search alert for music and apps kind of thing
7th Sep 2018

I don't care about "heat", I care about people actually seeing my deals, which they won't do if they go cold.
7th Sep 2018

Not necessarily as I for one always look for New rather than what’s Hot.