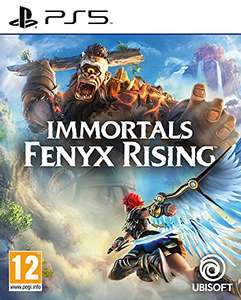 From the creators of Assassin's Creed Odyssey comes a storybook adventure about a forgotten hero on a quest to save the Greek gods. Embark on a journey to the Isle of the Blessed, which has been taken over by dangerous mythological creatures. Prove your legendary heroism by taking on their leader, Typhon, the deadliest monster in Greek mythology, in a face-off for the ages. An open world action adventure game full of epic battles and quests.

The Gods of Olympus have blessed you gifts: wings of Daidalos, sword of Achilles, bow of Odysseus and legendary powers that will help you in battle.

Face off against legendary beasts like Cyclops, Medusa, or Minotaur, and confront corrupted heroes such as Achilles.

Discover a beautifully rendered and vibrant fantasy world. Traverse, climb or explore by air across seven unique regions, each inspired by the gods.
PostTweetShare Share with WhatsApp Share with Messenger
Community Updates
6 Comments
Post a comment