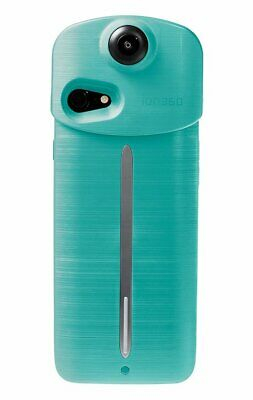 Clearance with a 12 month Argos guarantee

The totally immersive, ultra portable 4K 360 degree camera that attaches directly to your smartphone. Shoot up to 2 hours of 4K 360 video. Live stream in 360 to Facebook and YouTube. Also capture amazing 7.4MP 360 images which can be easily shared on 360-friendly social media platforms. The additional battery charging case protects your phone and keeps it powered for up to 2 hours meaning you'll never miss a moment.

Record and upload 4K 360 videos and still images to 360-friendly social media platforms, with the option to live stream to Facebook and YouTube.

The lightweight case attaches directly to your smartphone and protects and charges as you go, using 1300 mAh battery to power your camera and simultaneously charge your device. The ION 360 U gives you up to two hours of charging and recording.

Shoot 360 videos like a pro in real time with 4K quality, with the additional option to shoot in 180.

Compatible with both iPhone 7 Plus and iPhone 8 Plus.