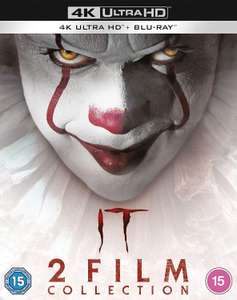 Description
This 2 film collection includes: Pennywise Lives! Discover how Bill Skarsgård prepared to portray the primordial creature known as Pennywise the Dancing Clown. The Losers’ Club Get up close and personal with the teenage stars of IT as they bond together during the film’s production. Author of Fear Stephen King reveals the roots of his best-selling novel, the nature of childhood fear, and how he created his most famous monster, Pennywise. Deleted Scenes Eleven deleted or extended scenes from the film. IT (2017) In Derry, Maine, seven young friends unite against a terrifying supernatural creature that has been haunting their small town for centuries. Calling itself Pennywise the Dancing Clown, IT is a monster of unspeakable power that takes the form of everyone’s most horrific fears. Threatened by their worst nightmares, the only way these kids can survive IT is together. IT Chapter Two- Twenty-seven years after the Losers' Club defeated Pennywise, IT has returned. Now adults, the Losers have long since gone their separate ways, but with people disappearing again in Derry, Mike calls the others back home. Damaged by their past experiences, they must each conquer their deepest fears to destroy Pennywise- who has become deadlier than ever- once and for all.