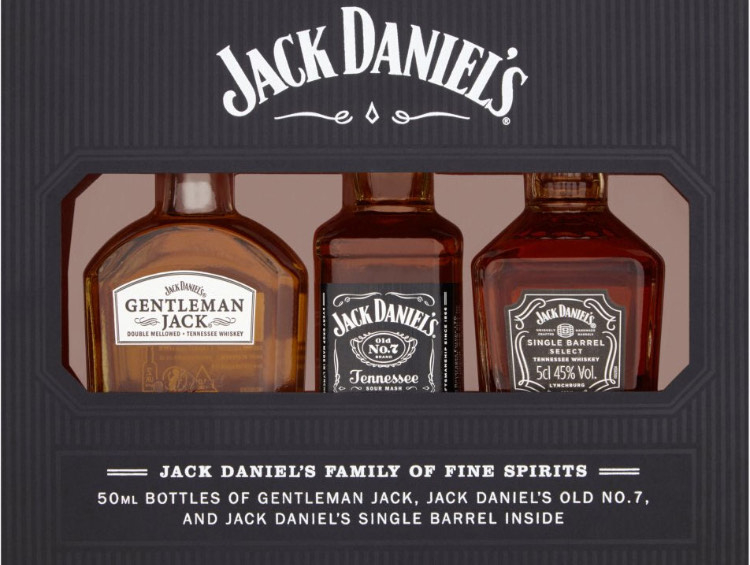 A gift set of three Jack Daniel’s premium Tennessee whiskey bottles.
Jack Daniel’s Old No. 7:
Jack Daniel’s Old No. 7 Tennessee Whiskey is a premium whiskey made using the finest ingredients and mellowed through 10 feet of sugar maple charcoal, before being aged in charred oak barrels. It is this unique way of making whiskey that makes Jack Daniel’s what it is - a smooth sipping Tennessee whiskey and not a bourbon.
Gentleman Jack:
Just like Jack Daniel’s Old No. 7 Tennessee Whiskey, Gentleman Jack is made using the finest ingredients and is charcoal mellowed through 10 feet of sugar maple charcoal before going into the barrel. Gentleman Jack, however, receives an additional ‘blessing’ when it is charcoal mellowed again after reaching maturity, giving it ultimate smoothness. It is the world’s only double mellowed whiskey.
Jack Daniel’s Single Barrel:
Jack Daniel’s Single Barrel Tennessee Whiskey comes from a single barrel which has been individually hand-selected for its unique taste and smooth and aromatic by the Jack Daniel’s Master Distiller and his team of Master Tasters. Once chosen, the whiskey is bottled a single barrel at a time, never mixed with whiskey from other barrels. The barrels chosen for Single Barrel come from the uppermost floors of the barrelhouses that dot the hills surrounding the Jack Daniel Distillery. The extremes in temperature these floors experience during the year result in barrels which yield whiskey of unusually bold, robust flavour.
3 x 5cl bottle, 2 serves in every bottle (25ml per serve).
PostTweetShare Share with WhatsApp Share with Messenger
Community Updates
Tesco DealsTesco vouchers codes
If you click through or buy using any of our links, retailers may pay hotukdeals some money, but this never affects which deals get posted. Find more info in our FAQs and About Us page.
New Comment Subscribe Save for later
6 Comments
14th Dec 2019
JD is whiskey, not that fake stuff
14th Dec 2019
25ml per serve
14th Dec 2019

JD is whiskey, not that fake stuff

Grr. It was late!

Not in Ireland
14th Dec 2019
Do you even get a shots worth with these?