These party packs are great for when you hang out with your mates, and stuff like Christmas. You connect your TV/Monitor to your PC/Laptop and then people play using their phones (you go to a website and type in the 4 letter code on your screen to connect - no app needed). Then there are all kinds of mini games you can play. Similar in some ways to the "cards against humanity" vibe, where generally people type and draw hilarious and messed up stuff.

I've been waiting for party pack 4 to go on sale for ages. Very positive reviews on steam, and lots of comments saying it's the best one yet.

Fanatical have been around for ages (they rebranded I think last year) so it's legit.

FIBBAGE 3 (2-8 players)
In this blanking fun sequel, players have access to a new interactivity with the audience by letting them add their own lies to the selection. Fibbage 3 also includes a new separate game mode – Fibbage: Enough About You – which replaces the traditional questions with questions relating to your fellow players.

SURVIVE THE INTERNET (3-8 players)
Twist your friends’ “online” comments in hilarious ways in this web-based frame game. In Survive the Internet, one player receives a question that asks their opinion on a topic – their answer is then taken out of context and sent to another player, who is then told to determine what the reply was, whilst attempting to twist the words to make the first player look bad.
All players are with the original replies and the guessed topic, and must vote on which is the silliest. Each vote earns points for the second player and a smaller number for the first player that provided the reply. The player with the most points at the end is the winner!

MONSTER SEEKING MONSTER (3-7 players)
Disguise yourself as a monster and attempt to date other players in the spooky Monster Seeking Monster. Players can send up to four messages to other players and, if the audience is participating, they can use lib-style prompts to select phrases to send. Each player then selects another player/monster that they would like to date based on the replies.
If two players select each other, they both earn a heart. The player with the most hearts at the end wins the game – don’t forget to use your monster super powers to score bonuses too!

BRACKETEERING (3-16 players)
The deranged debate match game where players place smart bets on stupid arguments. In Bracketeering, players are given a prompt to complete with funniest answer they can, with the answers randomly placed on a tournament-style grid. The players are then given one of the tournament matchups and must guess which answer will win that match up – the answer that gets the highest percentage of votes wins.

CIVIC DOODLE (3-8 players)
Civic Doodle will test your doodling skills as two players compete against one another in each round. Players have a short time to draw, with audience members providing real-time feedback on either drawing with preselected emojis. At the end of each round, players and the audience then vote for which drawing is better, with points going to both players based on how many votes they received, as well as an additional bonus points for emoji votes. 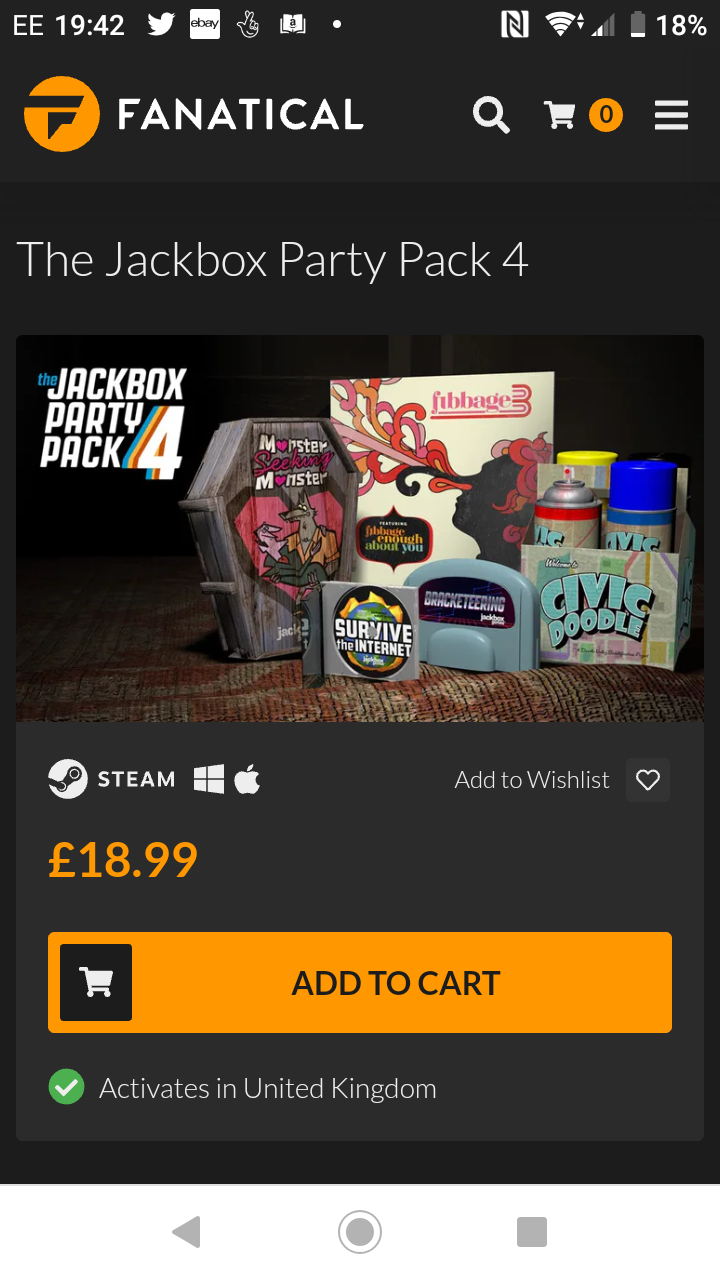 12th Jan
Suspicious, the timer said the deal was valid for another ~24 hours according to the timer. Wonder if they pulled it? Bit naughty...

I tweeted them, but not sure what'll happen.
Edited by: "NibblyPig" 12th Jan
12th Jan
I think the offers gone! Which is a real shame
12th Jan
It's been 80% off in the past; 75% doesn't seem so outlandish that they'd intentionally pull it.
12th Jan

As with many Fanatical deals the quantity is limited, there weren't many keys left when I clicked the e-shot this morning.
12th Jan
We had lots of fun with these over Christmas - from teenagers to grandparents. I managed to snag from Epic Games (Argentina) all in the sale with 1 to 4 now priced at the normal price of $6.99 each.
12th Jan
Literally just purchased at £4.75!
12th Jan