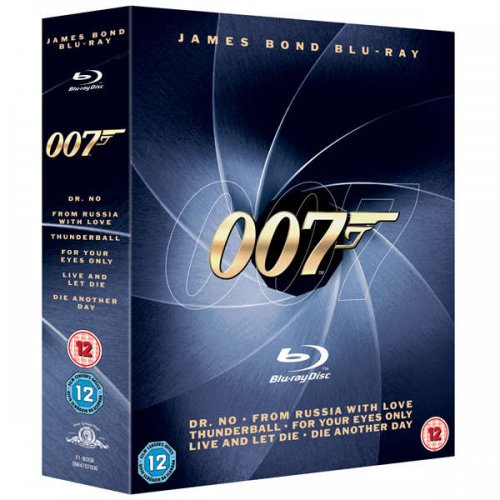 One of the greatest fictional creations of all time, James Bond has over the course of half a century permeated into the popular culture in a way few other figures, real or imagined could hope to equal. Initially a literary character created by Ian Fleming, today Bond is best known through his portrayals in film and this Blu-ray collection showcases some of the greatest films in high-definition 1080p for the first time.

Opening the collection is Sean Connery portraying what is arguably the quintessential James Bond in Dr No (1962), From Russia With Love (1963) and Thunderball (1965). Roger Moore continues starring in Live and Let Die (1973) and For Your Eyes Only (1981). Pierce Brosnan's period as Bond closes the collection with his film role as bond in Die Another Day (2002). The variety on offer means this box set is an opportunity that fans of the Bond films should find impossible to pass up and should be a core part of film afficanados Blu-ray collection. - A.B.
PostTweetShare Share with WhatsApp Share with Messenger
Community Updates
The Hut DealsThe Hut Discount Codes
New Comment SubscribeSave for later
12 Comments

deleted25857
10th Mar 2014
No Goldeneye, no sale!
10th Mar 2014
I was half asleep and jumped the gun and purchased, not realising the films involved, stupid late night mistake and I should have spent longer reading the details.

Instantly went to cancel when I realised, and half an hour later I received an email refusing my cancellation as it's "being prepared for dispatch" (probably just means it's on their computers), even though my cancellation was within 5 minutes and at 3:30 am. It still states on my account it hasn't been dispatched it's likely to be dispatched tomorrow.

I'm not trusting The Hut right now at all.
10th Mar 2014
I'm such an idiot, I'm not normally like this, urgh, probably wiped out a lot of my recent savings from here.

A certain amount of Mea Culpa, but they don't make it obvious what's involved, and for people in my fragile state (I've woken up now!) who is used to bigger Bond box sets at circa £65, £99 looked realistic. For that, I assumed it was cheaper and discounted, as it didn't have anything after Die Another Day and was thus a bit out dated. Oh well, doubt my bank will cancel payment either...

Dr No, From Russia With Love, Thunderball, Live and Let Die, For Your Eyes Only, Die Another Day.
10th Mar 2014

If they won't cancel the order, send it back. If that would cost you; refuse delivery if there is somebody delivering it. If there's not either 'return to sender' or just say you didn't get it, or both.
10th Mar 2014

I tried cancelling on numerous occasions, as much as they claim there is, there was no window for cancelling, they also have no phone number to contact them. I'm going to refuse delivery I think, as I'm still probably going to buy a box set at some point for my brother and don't want duplicates, cheers.

I don't know what the hell I was thinking last night, long weekend and tiredness is all I can claim, beyond being an idiot.

How did it go?

It was delivered through the letter box, it's that small.

I've sent it back (£2.60 - proof of postage), I'd managed to find a freepost address, but apparently they are difficult enough to deal with when you do things by the letter, so decided to pay up, I'm awaiting a response and refund from them.