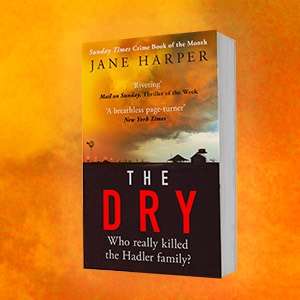 WHO REALLY KILLED THE HADLER FAMILY?

Amid the worst drought to ravage Australia in a century, it hasn't rained in small country town Kiewarra for two years. Tensions in the community become unbearable when three members of the Hadler family are brutally murdered. Everyone thinks Luke Hadler, who committed suicide after slaughtering his wife and six-year-old son, is guilty.

Policeman Aaron Falk returns to the town of his youth for the funeral of his childhood best friend, and is unwillingly drawn into the investigation. As questions mount and suspicion spreads through the town, Falk is forced to confront the community that rejected him twenty years earlier. Because Falk and Luke Hadler shared a secret, one which Luke's death threatens to unearth. And as Falk probes deeper into the killings, secrets from his past and why he left home bubble to the surface as he questions the truth of his friend's crime.

Praise for The Dry

A WINNER OF THE BRITISH BOOK AWARDS CRIME THRILLER BOOK OF THE YEAR
A CWA GOLD DAGGER AWARD WINNER
An Amazon.com's #1 Pick for Best Mystery & Thriller

Review
It is hard to believe that this accomplished piece of writing, which returns again and again to the savage beauty of the landscape, is Harper's first novel - Sunday Times, Crime Book of the Month January 2017

Wonderfully atmospheric, The Dry is both a riveting murder mystery and a beautifully wrought picture of a rural community under extreme pressure - Mail on Sunday Thriller of the Week, January 2017

The writing is fantastic, and the plot - where many mystery/thrillers fall short these days - was completely unpredictable in the best ways possible... Aaron Falk, returns to his hometown in Australia to mourn, and inevitably investigate, his best friend's apparent suicide. What comes next is a series of twists and turns that will keep you guessing all the way until the end. I repeatedly found myself shocked and pulled in by Harper's fast paced and engrossing writing. Truly a fantastic read and hopefully the first of many to come from Ms. Harper - An Amazon Best Book of January 2017, Amazon.com

One of the most assured crime debuts I've encountered in many years . . . It grips like a vice from first paragraph to last, atmospherically evoking the small town of Kiewarra . . . Told with heart-breaking precision and emotional power . . . If you read only one crime novel this year make it this one - Daily Mail
PostTweetShare Share with WhatsApp Share with Messenger
Community Updates
4 Comments
Post a comment