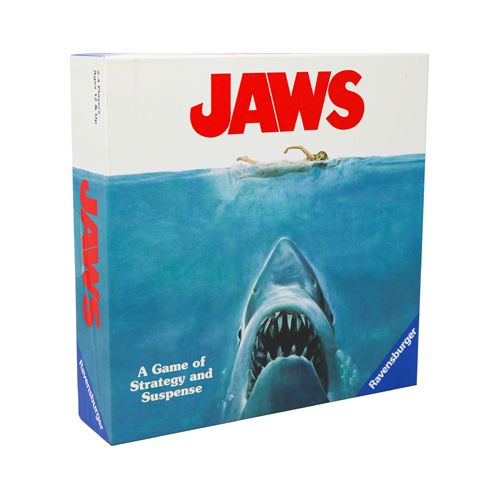 Code courtesy of "Board Game Trading and Chat" FB group, recommended to me recently and current about to get me divorced.

A relatively new game that is oos a lot of places. Not the cheapest it is ever likely to go but a decent discount compared to others.

In JAWS, one player takes on the role of the killer shark off Amity Island, while the other 1-3 players take on the roles of Brody, Hooper and Quint to hunt the shark. Character and event cards define player abilities and create game actions for humans and the shark. Gameplay is divided into two acts Amity Island and The Orca played on a double-sided board to replicate the film's story:

In the Amity Island phase, the shark menaces swimmers and avoids capture. Other players attempt to pinpoint the shark's location and save swimmers from shark attacks.
In the Orca phase, played on the reverse side of the game board, Brody, Hooper and Quint are aboard the sinking ship engaging in a climactic battle against the shark, while using additional action and strategy cards to defend the Orca from targeted shark attacks.
If humans kill the shark, they win; if the shark attack on the Orca succeeds, the great white shark wins.
PostTweetShare Share with WhatsApp Share with Messenger
Community Updates
Zatu Games Deals
If you click through or buy, retailers may pay hotukdeals some money, but this never affects which deals get posted. Find more info in our FAQs and About Us page.
New Comment Subscribe Save for later
22 Comments
4th Jan
You're gonna need a bigger boat!
4th Jan
I got this at Xmas. Have you played it Jay?
4th Jan

I got this at Xmas. Have you played it Jay?

Not yet, I like hidden movement games though so will be giving it a go at some point. You given it a go yet? I'm really not allowed any more now...
Got kanagawa, ultra tiny epic galaxy, ultra tiny epic kingdom and that princess game I posted so far this year

Should be playing Dune in a couple of weeks too
Edited by: "jayhutton10" 4th Jan
4th Jan
Yep played it as a full 4 player. Would def work best with the full 4. It is two games in one really. I loved the first part. I was Jaws swimming around the island eating swimmers whilst everyone else is trying to track me. Great fun. Second half of the game the board gets flipped over and the other characters are on the boat. Jaws has to either kill all characters or sink the boat. I personally didn’t like this phase quite so much. Still good but not as fun as the first phase. I need to give it another go. I also got Robinson Crusoe. Wow that is a hard game to figure out and then win.
4th Jan

Sounds a bit the same as Fury of Drac. Was compared to that last time I posted it. A sweet spot of players. Would probably work well at 2 players as well?
Yeah I've heard that about Robinson Crusoe bet it will be worth it in the end. Kanagawa is odd and unlike anything I've played before, very enjoyable but the rule book is terrible, makes no sense. Had to watch a few playthrough videos but even then its not 100% clear.
Been thinking of getting some more gateway games as oldest is really showing an interested. I don't actually own Ticket to Ride or Lords of Waterdeep so might pick one of them up next as I'm sure he'd enjoy both of those.
4th Jan
You know Robinson Crusoe is hard when during the Rodney Smith play through videos he constantly forgets certain actions. How old is your eldest?
4th Jan

You're gonna need a bigger boat!

Haha not often you see Rodney make mistake like that.
He's 8, played Castles of Caladale with me quite a bit. Played patchwork with him the other day which he enjoyed but his favourite so far is Jaipur, only beaten him once at that.
4th Jan

If he likes Jaipur then Splendour is a next good step on theme and complexity. If you want a good entry in to worker placement then Agricola Family Edition is a really good one. He would completely get that. Can be found cheap on eBay for £20.
4th Jan

That's so odd, I literally just put splendor on his tablet. Thanks, that's a great call about agricola as wanted that for a while anyway, is the family edition dumbed down a lot or just to make the mechanics more simple?
I love a good worker placement game
4th Jan
I think the full Agricola is pretty complex. Never personally played that. The family edition is apparently very similar but more forgiving. I would happily play it with just adults. It certainly isn’t just a kids game. Couldn’t recommend that enough. If he likes the card style of Jaipur then another great game that our boys like us Port Royal. Really fun for all ages.
4th Jan

I'll check the family edition out then. That's great thanks. Looked at port royal, usually pick that up cheap as well. Also looked at San Juan but that's showing its age a bit now. I'll probably try him on carcassonne without fields as well to see how he likes that as the tile laying element of castles of caladale is what he likes
4th Jan
Jay someone just posted Agricola Family edition on the Facebook page for £18 delivered

I'm the same as Robyn, Liked the first part of Jaws not so much the second. Yet to win as the shark, even eating 9 swimmers in the first round didn't make a difference in the second!

Played Robinson Crusoe twice with a friend and lost twice, obviously! Just picked it up second hand for £25 to give it a go with the missus. I like games that you lose more than you win, more satisfying when you finally get that victory!
4th Jan

Not found anyone who dislikes it yet, one of my goto starter games
5th Jan

I also prefer games that seem difficult to beat as when you finally do it you get that sense of achievement.
Have you played the xcom game? That's very much like that but is not a relaxing experience and you really need 4 players
Edited by: "jayhutton10" 5th Jan
5th Jan

Love a difficult game. Played burgle Bros recently and lost every attempt, great game, highly recommend. Was late to the party with Pandemic and was told it was hard but never lost a game so far. Same with flashpoint, never lost although yet to try it on the hardest set up. When you win it makes you check the rules in case you are playing it wrong!
5th Jan

I've found Iberia better than vanilla Pandemic. Needs more forward planning as can't just fly round the board so really need to plan the railways you build. Don't think we've beaten it yet and played it 4 times (on hard).
Not tried flashpoint but might try and give it a go. Xcom was great but feel that with the wrong group it would have been terrible, luckily we all gelled and worked really well together.
The benefit of it is that you don't get an Alpha Gamer as there's no time for that. It's usually me in our group as I can't help myself
5th Jan

Just seen a damaged box xcom go on FB group for £10. Tempted but wouldn't play it enough
11th Jan
I got this for Xmas and agree the first part of the game is awesome, tracking the shark while he's picking off swimmers. The 2nd part feels really clunky with the shark attacking the boat while the crew attack the shark with different weapons. There's far too many cards and the instructions aren't the clearest
11th Jan
They've changed the shape of the box since I last played. 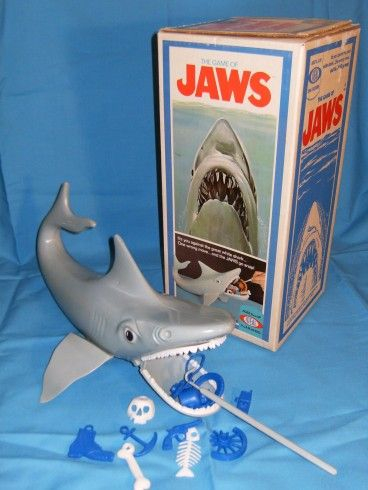