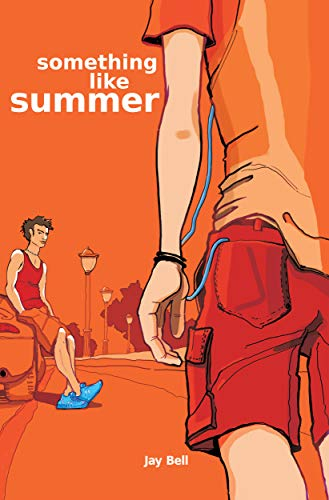 Jay Bell's "Something Like Summer" free for the weekend in Amazon Kindle - Happy Pride readers! ️

The hot Texas nights were lonely for Ben before his heart began beating to the rhythm of two words; Tim Wyman. By all appearances, Tim had the perfect body and ideal life, but when a not-so-accidental collision brings them together, Ben discovers that the truth is rarely so simple. If winning Tim's heart was an impossible quest, keeping it would prove even harder as family, society, and emotion threaten to tear them apart.

Something Like Summer is a coming-of-age story spanning a decade and beyond as two young men discover what it means to be friends, lovers, and sometimes even enemies.

Each Something Like... book follows a different LGBTQ character on their quest for love. Central to the plot is the troubled relationship between Ben and Tim, high school sweethearts who continue to meet at different stages of their lives, their chemistry changing with each encounter. Surrounding them are a wealth of friends and enemies, each with their own story, resulting in an immersive universe filled with optimism and hope, heartbreak and healing. While the series doesn't shy away from sexual content, it also focuses deeply on emotion, promising an experience that will stay with you long after the final page is turned.

Jay Bell led a quiet life in Kansas until the day he met a handsome foreign exchange student named Andreas who swept him off his feet and carried him all the way to Germany. Much to their delight, marriage awaited them when they got there. While living so distant from friends and family, Jay began writing in an effort to reconcile the mixture of devotion and alienation he felt. This resulted in a Lambda Literary Award and a film option for his best-selling novel Something Like Summer. Jay and Andreas have since relocated to Chicago where their adventures continue, as do those of the characters in their emotionally driven Something Like… series. Jay pens the stories and Andreas provides the cover art, making them books about love, forged by love.

"Jay Bell is an auto-buy author for me. It started with Something like Summer, and from that point on, I have read every word of the Something Like...series and have listened to just about all of them. Jay Bell is such a great writer that you become invested in his characters." Kathie, The Novel Approach on Something Like Lightning


"Author Jay Bell wows us once again with his consummate storytelling, his impeccable characterization, and his superior ability to weave a remarkably sweet and lyrical love story." Sammy, Joyfully Jay on Kamikaze Boys

"Jay's grasp of creating emotional atmospheres in his stories is phenomenal. His words reach inside of me, invoking emotions, almost before I know I feel them." Lena Grey, Rainbow Books Reviews on Something Like Lightning

"The dialogue is witty and real, the emotion raw and deep. I'm in love with every character in these stories -- they feel like family. I've learned so much from these books and, trite as it may sound, I now have a deeper appreciation for love and life. Excellent." - Sara, Amazon customer on Something Like Rain

"With Something Like Summer, Jay Bell has created a space where love and romance; grief, understanding and change all resonate with the reader, whether gay or straight, much in the same way Annie Proulx did in Brokeback Mountain." Raant Magazine on Something Like Summer