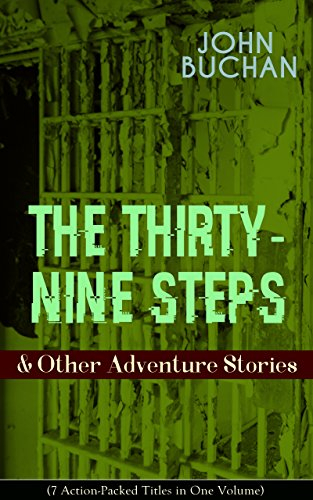 This carefully crafted ebook: "THE THIRTY-NINE STEPS & Other Adventure Stories (7 Action-Packed Titles in One Volume)" is formatted for your eReader with a functional and detailed table of contents.
The Thirty-Nine Steps – Richard Hannay is buttonholed by an American stranger who knows of an anarchist plot to assassinate the Greek Premier during his forthcoming visit to London. It is now up to Hannay to save the day and stop Europe from destabilising.
The Courts of the Morning - Hannay is approached by the American military attache in London to solve the mystery of Blenkiron's disappearance in South America. He seeks out his friend Sandy Arbuthnot for help, but Sandy soon disappears, sending Hannay a mysterious letter . . .
Prester John - It tells the story of a young Scotsman named David Crawfurd and his adventures in South Africa, where a Zulu uprising is tied to the medieval legend of Prester John.
A Prince of the Captivity - Released from gaol during World War I, Adam Melfort is recruited as an undercover agent and later leads an expedition to Greenland to rescue a wealthy American millionaire explorer. The story is based on true but fatal account of Alfred Wegener.
Salute to Adventurers - A gripping tale of adventure and love in 1600s when the first settlers moved oversees to new lands.
The Path of the King - Traces the glorious family history of a Scottish family and their gold to recent times in this adventurous story.
Midwinter - A young Jacobite falls in love against the backdrop of the 1740s Jacobite Rebellion, while the Bonnie Prince Charles wants his throne back and entrusts a secret mission to his faithful supporter.
John Buchan (1875-1940) was a Scottish novelist and historian and also served as Canada's Governor General.

Thanks Boz. Only 4 more to get to 4K Deals