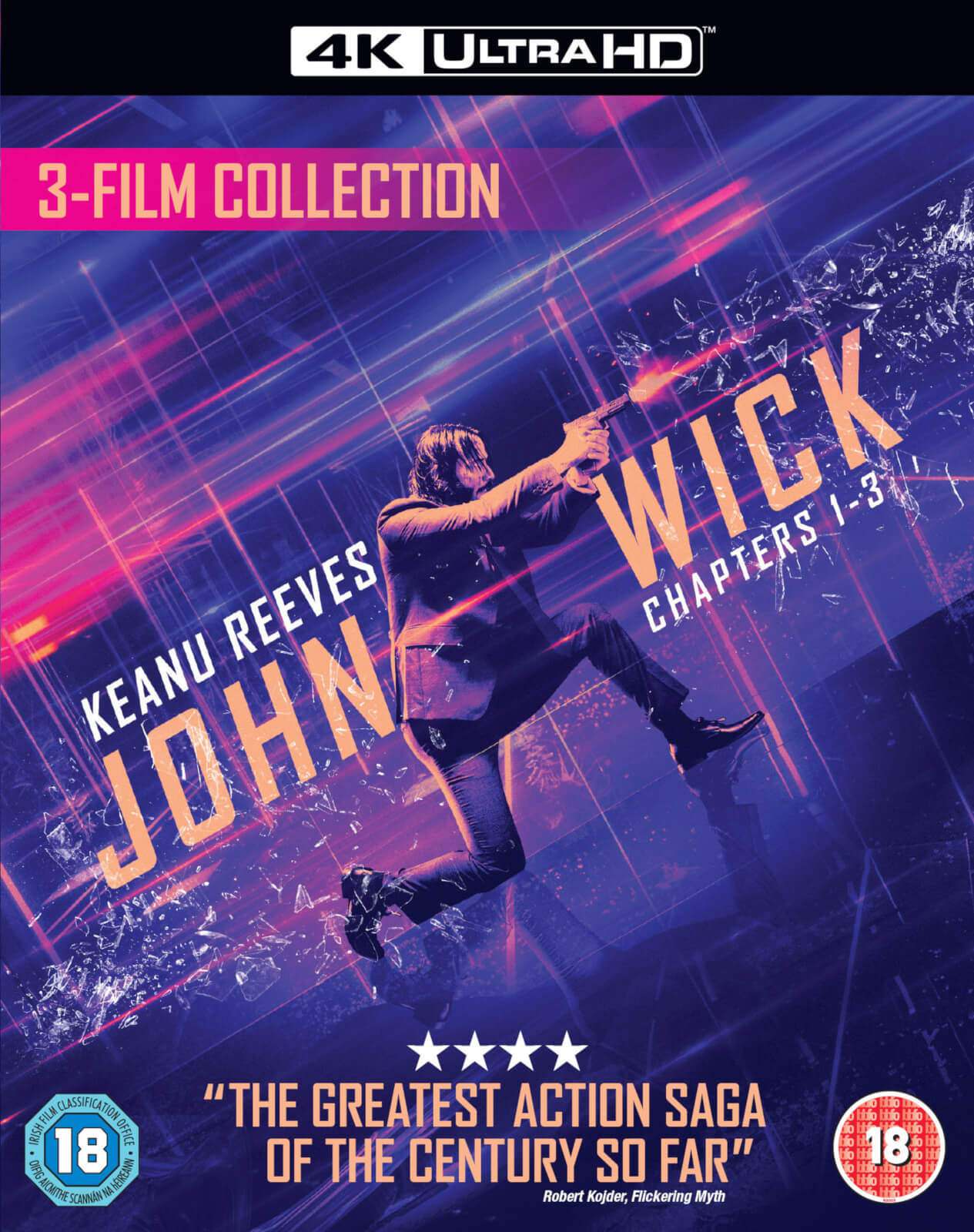 Thought this was a decent price for the 4k discs of all 3 films!

Triple bill of action thrillers starring Keanu Reeves as a former hitman who must return to the criminal world he left behind in order to seek revenge. In 'John Wick' (2014), after the eponymous hitman (Reeves) refuses to sell his car to Russian gang leader Iosef (Alfie Allen), the gang members break into his home and kill his dog, a gift left to him by his late wife Helen (Bridget Moynahan). It turns out that Iosef is the son of Wick's ex-boss Viggo Tarasov (Michael Nyqvist), head of the Russian mafia in New York. As John attempts to track down and kill Iosef he encounters assassin Ms. Perkins (Adrianne Palicki), who is working for Viggo, and eventually faces his former boss in an ultimate showdown.

In 'John Wick - Chapter 2' (2017) Wick is again coaxed out of retirement when Italian crime boss Santino D'Antonio (Riccardo Scamarcio) calls in a debt and persuades the former hitman to kill his sister, Gianna (Claudia Gerini), in Rome. However, the tables are soon turned when Santino puts out a hit on Wick, a bounty his fellow assassins all over the world are only too happy to collect. The cast also includes Ian McShane, John Leguizamo, Willem Dafoe and Laurence Fishburne.

In ‘John Wick: Chapter 3 – Parabellum’, super-assassin John Wick returns with a $14 million price tag on his head and an army of bounty-hunting killers on his trail. After killing a member of the shadowy international assassin's guild, the High Table, John Wick is excommunicado, but the world's most ruthless hit men and women await his every turn.
PostTweetShare Share with WhatsApp Share with Messenger
Community Updates
Zavvi DealsZavvi Discount Codes
If you click through or buy, retailers may pay hotukdeals some money, but this never affects which deals get posted. Find more info in our FAQs and About Us page.
New Comment Subscribe Save for later
13 Comments
6th Dec 2019
Plus £1.99 delivery
6th Dec 2019

Any reason youu would want blu ray if have the 4k uhd version? Same when the did the blu rays with a dvd- why bother. What's the point? "Oh I'm so desperate to watch this film again but haven't got my uhd player. I know I'll just bung in the inferior quality and just make do.."
6th Dec 2019
Wow what a rip off considering there’s potential for more films to be released.
6th Dec 2019
Got this and the iron man 4k trilogy on black friday from zavvi delivered for £67. Code GLOBAL15 got 15% off over £60 plus free delivery over £50
6th Dec 2019

Not sure the official reason they were included, maybe to watch in another room that doesn't have a UHD bluray player without you having to move the player, watch at a friends etc. I know the reason I liked them (and the now almost entirely gone downloads) was the simple fact you could sell them and offset the still relatively high price of the format a bit. With this boxset being both expensive and offering no Blurays or Downloads it's pretty poor value unless it gets a lot cheaper IMHO...
6th Dec 2019
The 3rd film was imo just a set up for at least another one
Fed up of buying boxsets only for another film to be announced !!
Just look at the price drops on the Avengers trilogy when end game was released
7th Dec 2019

Special features. 4k discs generally have zero.
Also future proofing. I bought Bluray & DVD Double Play releases before I had a bluray player because the price difference was negligible. Same with 4K although I have a player (Xbox One S) just no 4K TV yet but I may as well pay a few quid more and know I won't need to buy again later.
And I'd be shocked if this didn't have 6 discs.
I am shocked I just checked Ebay. That really is poor. I paid 35 quid total for all 3 individual 4k releases with regular bluray and slips.
Edited by: "stingersplash" 7th Dec 2019
7th Dec 2019

The second was the same
I try and buy individually unless the boxset is definitely complete or its very cheap.
7th Dec 2019

I actually lend the blu ray films to my relatives and friends.
7th Dec 2019

I actually lend the blu ray films to my relatives and friends.

I get some of the reasons but it still seems silly to *Only purchase a certain boxset if it includes an older format simply to lend these out..