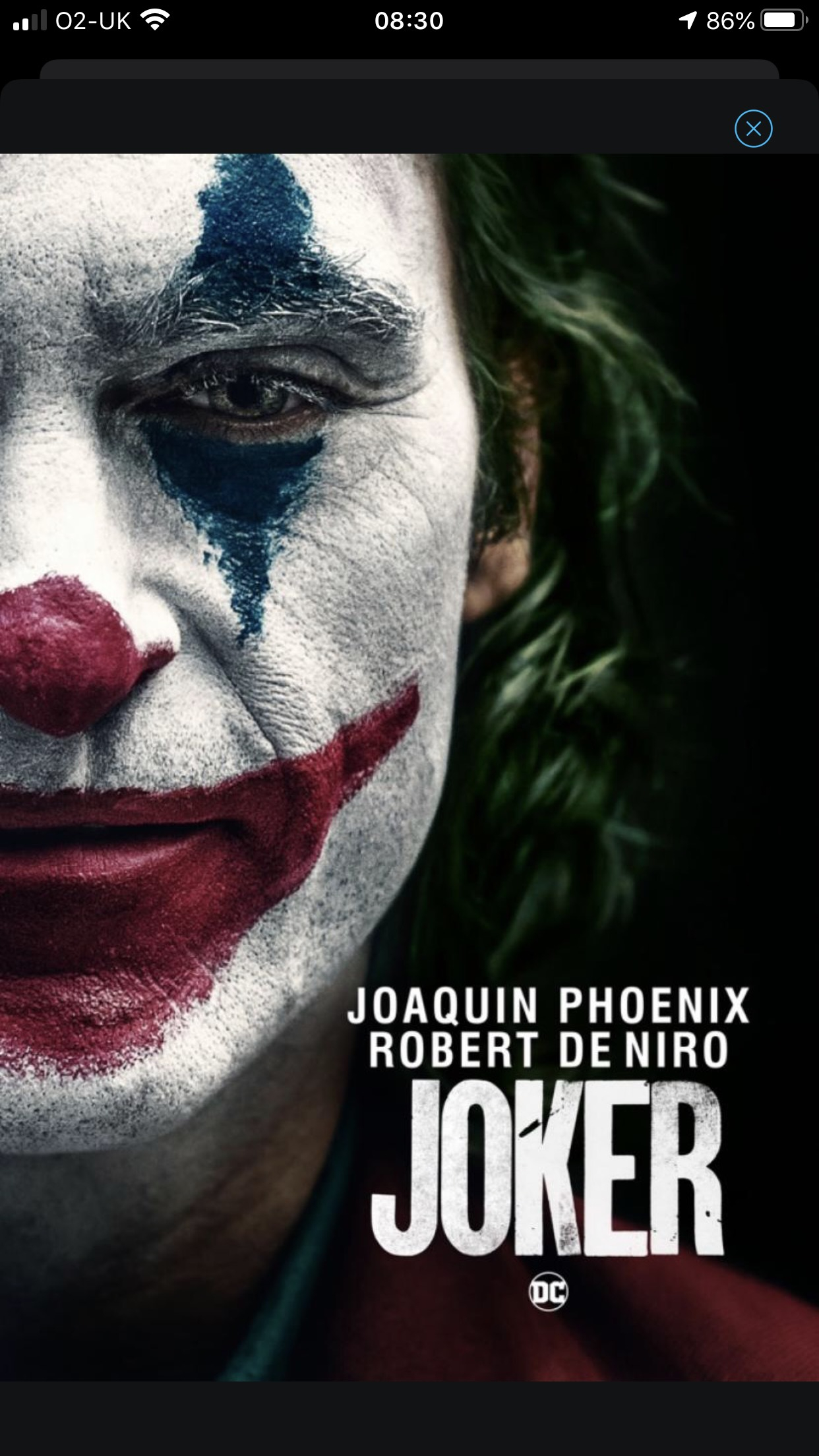 Not every film has to be typical Hollywood feel good affair.

Not every film has to be typical Hollywood feel good affair.

Personally I like variety.
18th May
I assume those voting cold know where to find it cheaper...
18th May

If you want to rent, then it’s the same price on iTunes and you’ll get 4K DV.
18th May
Heat added OP as best price to get it in 4K
18th May
For about the last 2 weeks was less than £6 from iTunes canada
18th May

Heat added OP as best price to get it in 4K

Do you even need to have Prime to rent?
19th May

It was a meaningless film. No point. Why another film about the Joker? There is already Heath Ledger's performance in the Dark Knight. This adds nothing more. What is there to be learnt? Nothing. This was just unrelieved depression. Who wants that at the current time? Or at any time for that matter?
What is wrong with Hollywood 'blockbusters' The Guardians of the Galaxy was great from the first moment.Or Deadpool?
If I was paid £9.99, I wouldn't watch this firm again. I can't imagine anyone would watch this film twice
Edited by: "jasee" 19th May
19th May
Cold. I can watch this free if i stand outside in my garden long enough looking over the wall and wait for the neighbours to watch it...hopefully with subtitles on.


Seriously, is this where HUKD is at now? Comparing purchases to rentals? The only question being asked is “is this a good price?” And the answer is “yes”. This is currently the cheapest UK price for the 4K digital film and therefore it should get heat. If we

When talking about Purchasing...

No one wants your expert “review” of the film, thats what IMDB/RT is for.
No one cares if you can watch via a subscription service (always forgetting to mention monthly price).
Everyone knows everything is “free” by *breaking the law* with Kodi.
...and please dont come on here telling us about that new craze called “renting”

Change the record people, its comments and cold votes like these that ruin HDUK and bury genuinely good deals.

Oh, one other thing...Im so tired of this site now being the place for “overseas” iTunes deals. We seem to get more posts about iTunes US/Canada/The Moon than actual UK store deals. If i wanted to know the price of a film in the US store, id go visit HUSAD. I dont want to subscribe to a VPN, set up multiple iTunes accounts, pay with a Chinese bank account into a French Paypal account so that i can visit a Scottish Hotel to watch a film standing on my head because it will save me £3.72 instead of just paying £9.99.


All we ever seem to get is one post a week regarding actual iTunes deals from the UK that has just been stolen from cheap charts, and if you are lucky someone occasionally highlights a good deal like this. The remainder of the deals are all “$XX.XX @ iTunes US”.

Anyone remember the good old days where people would actually find UK deals and post them using nothing but skill and research?


This site used to be so good.

No doubt ill get shot down for this post, but i know others feel the same. Heat added Op.
Edited by: "EstorilBlue" 19th May
19th May

I agree, it should be hot. However, bringing up the rental price is perfectly legitimate. You could rent it now for £2.49, then buy it later when it inevitably goes down to £4/5/6. You get to see the film now, then own it later, and you've saved yourself some cash.

No one wants your expert “review” of the film, thats what IMDB/RT is for.

Everybody is entitled to post an opinion, no matter how misguided/stupid/ignorant you might think it is. You can either ignore those comments, or call them out on said misguidedness/stupidity/ignorance.

Again, it's perfectly legitimate to bring up the fact a film might be available to stream on subscription. Just don't claim it's free.

Those who highlight illegal methods of obtaining films should be called out and/or reported for encouraging piracy. HDUK will deal with those posts in my experience.

You are free to ignore deals that don't interest you. I ignore 99% of the deals on this site, but it doesn't mean they have any less right to be posted. If you don't want the hassle of buying overseas iTunes deals, then don't (I don't either).

That's unnecessarily harsh and a rude slur to accuse somebody of stealing. It also quite frankly comes across as very bitter. Nobody is stopping you posting individual deals, should you so wish.

Unless you're saying there is some other clever method to finding iTunes deals or you have inside information, there is no skill to browsing iTunes searching for deals. CheapCharts is just another way of obtaining information and your accusation that it is stealing to take information from there to post as deals here, takes away from the time and effort taken to post the latest list of deals. Not to mention that not everybody is aware of the app's existence.

Quite right.
19th May

Cant stand Marvel films personally. They are all generic and predictable to me. However I wouldn't vote a deal on a marvel film cold just because I didn't like the film. A good deal is a good deal.

Essentially you have just said that because you didn't like the film, then the deal is cold. I don't believe that is how this site is suppose to work.
19th May

I assume those voting cold know where to find it cheaper...

Luckily this site is a democracy and you don't 'have' to vote hot...
19th May

Luckily this site is a democracy and you don't 'have' to vote hot...

Of course. But like all voters in a democracy, they can be misguided.
21st May
“I think the atmosphere has turned rrrrrather sour.”

Only posted as it’s currently the cheapest price and it’s the lowest it’s been but you can’t please everyone, maybe if it’s that un-appealing they will drop the price again soon if people aren’t buying. Thanks guys
24th May
HUKD really is a funny old website at times. People vote cold going by the product itself half the times these days instead of the actual price. This is about the cheapest you'll find this in 4K (even if it's just down a few quid from it's normal iTunes price) and does it get voted hot? No, the complete opposite.
Edited by: "Caskey" 24th May
9 h, 7 m ago
£13.99 again now.